Vicky Ventura is the brave explorer who set out to explore ancient Incan ruins and we’re tasked in helping her excavating the biggest treasures!

The slot was developed by Red Tiger Gaming and released in 2019, portraying a beautiful Incan temple that frames a 5-reel, 3-row playing field with 243 ways to win. However, Vicky Ventura has the opportunity to trigger the free spins mode in which the game expands to a 5-row, 7-reel playing field and a massive 16,807 ways to win!

The adventurer theme is a pretty popular one for a lot of developers, ranging from NetEnt’s classic Gonzo’s Quest and Lost Relics to Maya by Red Rake Gaming. I found Vicky Ventura to keep up pretty well with the bigger name slots with its own character, animated symbols and a pretty unique free spins mode.

It all looked very nice, although I missed the titular character of Vicky during the base game. Seeing as the game was named after her I expected her to be a more prominent part of the slot, instead she really only appears as the Wild symbol. I thought that was a bit of a missed opportunity but it didn’t detract from the experience either!

The game’s sound design is good with a collection of jungle sounds in the background and an inspiring soundtrack you would find in classic adventure movies. The win jingles were pretty standard but all in all I found the sound to be excellent.

The symbols are all sharp and nicely drawn but also completely static, even when part of a winning payline. The only exception being the Totem Crystal, which would dispense its power into the totem to the side of the crystal before the power would be shot back into the reels.

Vicky Ventura has a few different features that change the classic gameplay experience. To start with I’ll list them here:

Most of these features will be familiar to players but I think the way it combined them is what made the slot stand out. The Totem Crystal fit the theme perfectly while at the same time adding a fun extra feature to the game. It didn’t show up that often and would only change the gameplay a little but it did look great.

The expanding reels looked really good, sliding up and the game zooming out to show them all on the screen. In terms of gameplay, the free spins mode was the best way to get some big wins. Considering the game’s High Volatility I found this to be particularly lucrative.

All in all, I found the different features to work well together. I did find it strange how low the different coin wins were but as I played I found that the 243 ways to win helped in getting bigger wins and they would keep my funds pretty stable.

Vicky Ventura is a good slot made by one of the smaller developers, living up to the expectations set by the bigger names in the industry. Although it still lacks some polish, namely in the way the animations are done and the inclusion of an actual character, it shows the developer could be on track to become another big name in the industry.

The slot itself stays relatively close to the classic slot experience while adding some additional features to differentiate itself. The expanding reels were rare enough to feel separate from the rest of the game which leaves a rather standard game during most of the time playing.

I found the additional features the slot has to work quite well. You can pick a quick spin but it makes the spin really fast, so be aware that you should choose a bet that isn’t too high or it’ll evaporate before your eyes. As a player, you can pick a bet between £0.10 and £100 per spin. The maximum win of 10,000x your bet is quite a big jackpot!

All in all, Vicky Ventura will appeal to most players since it doesn’t really pick a direction it wants to focus on. The gameplay is pretty standard for classic slots while the features keep the game interesting for more modern players. You can’t really go wrong with this slot so give it a try!

Browse casinos with Vicky Ventura and other slots from Red Tiger. Create an account and try the game for free before making a deposit.

You can play Vicky Ventura in English, Finnish, Swedish, German and 18 other languages. 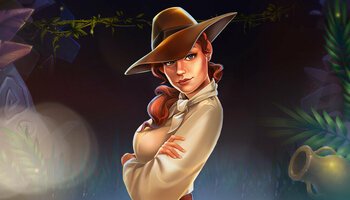