The original Victorious game is a 5x3, medium-to-high volatility slot with 243 ways to win. Released in 2011, the design is based on the theme of ancient Roman warriors. The theme, features and game mechanics didn’t really change in the Victorious MAX sequel slot. What NetEnt did very differently in the remake was the introduction of greater volatility, higher-paying symbols and maximum wins that take the game’s payout to a whole new level.

I packed my sword and suit of armour and travelled back in ancient times to the test the Victorious MAX online slot. Do Julius Caesar and his army restore the Glory of the Roman Empire in the Victorious MAX remake? Or should have NetEnt stuck to the legacy of its original Victorious slot machine? Join me for an epic Roman battle on the reels to find out!

In the case of the Victorious MAX sequel, the original design that is inspired by the great Roman Empire theme remained pretty much the same.

The game’s welcome screen allows you to ‘choose your destiny’ by selecting to play on either the classic or the newer MAX version of the game. There is also a button on the slot panel that lets you switch between the Victorious and Victorious MAX slot machines while playing.

I found this feature to be very convenient, given that you get to keep the same balance when alternating between the two games. Also when playing on the Victorious Max slot, the game controls and part of the backdrop turn to blazing red, compared to the green colours that show in the Victorious classic version.

But the visual differences are too subtle. Not only did I sometimes get confused as to which game I was playing, I also believe that NetEnt missed an opportunity to create a different atmosphere and make the theme more interesting by adding different visuals to the remake.

Most of the game screen is taken by the 5x3 grid. High-paying symbols feature cartoon-like Roman soldiers, and low-paying symbols are depicted by card-playing symbols on marble tiles. The backdrop features some Roman columns and soldiers holding legion standards with Roman eagles and payline numbers.

Although boasting different payouts, the visual elements of the Victorious MAX slot are the same as in the original game. Following are the game symbols and their payouts and functions:

The only good thing to say about the Victorious slot machine’s soundtrack is that it doesn’t bother you too much in case you have the slot playing in the background. But other than that, it’s pretty much non-existent. The reels make an understated noise when spinning, and different battle-trumpet sounds play when landing winning combinations.

I would have liked to hear new sounds that could have brought to the Victorious MAX slot more excitement. But similar to the design, NetEnt also decided to stick with the original soundtrack.

Free Spins can be retriggered only once if you land at least 3 more wreath symbols during the bonus game. This will award you a maximum of 50 Free Spins. However, the 6x multiplier is removed during the additional Free Spins.

The iconic Aquila Roman eagle serves as a Wild Symbol. It will step in to substitute for any other symbols (except for the Free Spins Symbol) to help you win. Note that it only appears on the second and fourth reels.

If you were captured by the epic battles on the reels of the Victorious MAX slot machine, pay another visit to the Roman Empire on Yggdrasil’s Champions of Rome slot. This 5x3 medium-volatility slot takes you to the colosseum where heroic gladiators fight on the reels. The excitement depicted by Yggdrasil’s brilliant graphics and sounds is only topped by a max win of 12,000x your bet.

A few design improvements could have gone a long way in injecting new life and excitement into the battle-hardened Roman battalion. But with higher variance, greater RTP and a chance to win 7,000 times your stake, Julius Caesar and his troops still have what it takes to win the war!

Browse casinos with Victorious MAX and other slots from NetEnt. Create an account and try the game for free before making a deposit.

You can play Victorious MAX in English, Finnish, Swedish, German and 20 other languages. 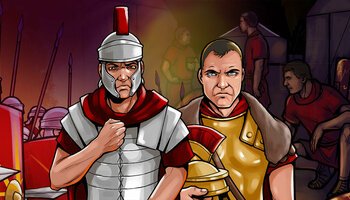