If I were part of a Viking's crew that's chock-full of testosterone and the leader is a pretty braided redhead she-warrior in a pretty dress, I'd be very much at ease and ready to take on any multi-tentacled monster that may arise out of the sea.

Viking Age by Betsoft sets the premise along those lines and makes it work like a fun-loving, animation-filled online slot on three rows and five reels. I'd be lying if I didn't say that I thoroughly enjoyed the game and this isn't only because of the look and feel of the design.

Viking Age comes with a free spins bonus and win multipliers, so base game wins can mean one thing, while landing a few good combinations during the bonus game gets a guaranteed boost.

In addition to this, the game comes with two other bonus features so when you heap it all together, it boils down to one exciting adventure in Viking land.

Viking Age takes you through the essence of the things and experiences that made Viking life worthy of distilling into an entire literary and cinematic realm. The game is designed very well and the style of the drawings and renderings of both characters and objects alike very much fits the nature of the gameplay. I've enjoyed seeing every single winning outcome materialize into a brief animated sequence.

I can suggest that those of you who are checking out Viking Age for the first time should watch the cinematic introduction to the game. I am yet to find a slot game that's been given such a lengthy intro and this is not to say that it wasn't worth seeing it. I guess it just states that Betsoft has gone the extra nautical mile on their Viking voyage to display endomorphic grunts and a pretty female braving the climate on their way to discovering the magical runestone.

As for the sound department, I really like what Betsoft has done with it - the dramatic symphonic and all, but I wish there was the option to turn off the sound effects of thudding symbols and the clanking of swords so that I can enjoy the soundtrack as is. Nevertheless, the sound effects are subtle enough so you can actually have the sound setting on and still enjoy the gameplay.

A story about Vikings has to pack some mystery in it too, not just an arsenal of weapons and brute force. Viking Age does that by tapping into the elements of Norse mythology.

One of the features involves opening portals and reaching benefits by way of invoking the sound of the magical rune characters, another feature is all about muscle-power and pushing your opponent into submission, and the third feature is a good old free spins bonus with guaranteed win multipliers.

The feature is triggered by three or more of the winged helmet symbols. In the event, you select one of the rune symbols to unveil an instant cash prize, free spins or the Bonus Round.

This is a game of chance steeped in randomness, as your objective is to pick a favourite in the arm-wrestling bout. The end result can be a sizable instant win.

This is my favourite bonus feature of Viking Age because I find it to be the most exciting one. It's a classical free spins bonus, but the player gets the benefit of a win multiplied being factored-in for every winning outcome.

The best part about the bonus is that the additional reels on both sides of the reel set spin with every turn, thus changing the order of the multipliers, which can be 2x, 3x or 5x the winning outcome. It triggers when three of Amma the redhead warrior’s symbols post anywhere on the reel set.

One thing that is typical for this game besides the lively graphic design and animation is the selectable paylines and the way in which you can select the amount of your wager. This is typical for most of the older Betsoft games, or as I like to call them, the old gold of Betsoft.

At any rate, you can choose to play on fewer than 30 paylines. If you want to just try the game and play the smallest possible bet, you can play Viking Age as a penny slot because a coin value of 1p on one payline costs exactly that much to play.

In all likelihood, I think players are going to enjoy this game on all 30 lines in order not to miss out on any winning combinations. Speaking of those, the high-paying symbols of the Vikings and their langskip can pay between 0.5x and 10x your bet.

The remaining symbols can pay as follows:

The game was released back in 2012 which is a century in slot years. Yet, it looks like Viking Age hasn't aged poorly at all. I wish the theoretical return to player value is greater than 94.20% but the medium volatility and all of the symbols that can pay for two of a kind justifies it. After all, I don't think 94.20% is too low, however, Betsoft's Viking Age doesn't come with a huge payout potential.

There are many games on the same theme and some that bear the same level of similarity, like Vikings go Wild and Vikings go Berserk, both by Yggdrasil and both equipped with heftier maximum payout potential. On the other hand, I like Viking Age because it can make frequent payouts that can see you through the bonus features.

Browse casinos with Viking Age and other slots from Betsoft. Create an account and try the game for free before making a deposit.

You can play Viking Age in English, Finnish, Swedish, German and 21 other languages. 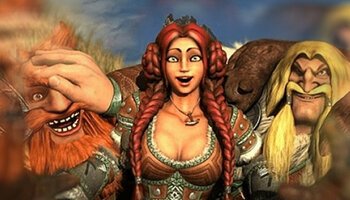