Gather your warriors and set sail on a perilous voyage. Pillage and plunder to your heart’s content in Viking Voyage.

Set sail and travel across the vast seas with the fiercest warriors who ever lived. Viking Voyage is a light-hearted slot from Betsoft. Published in the spring of 2019, Viking Voyage is a part of Betsoft’s buy-a-bonus game series.

This slot is built upon the special features. There is a massive amount of different features to try out and gamble with. Some let you get better wins, and some let you push your luck even further.

I love the features of Viking Voyage. Nothing is locked away behind some other feature, like the night and day cycle of Betsoft’s Ogre Empire. Everything is up for grabs and you can even buy them if you don’t want to wait. This slot is equipped with 243 paylines, a high volatility and a 96.12% return to player. It is a feisty game, but worth your time.

The visuals of Viking Voyage are nice. The cartoony Vikings are light-hearted enough, so you don’t really think about the violent and brutal history of the real Vikings. This game is not like the Vikings TV show, but more like something Pixar or Dreamsworks would make a film about.

The art style does remind me of the How to Train Your Dragon film series. If these Vikings were done in a more two-dimensional art style, they would fit in an Asterix comic. Both of these are good things in my book, as I love animated films and classic comics.

Along with the beautiful visual, you also need some fitting music. Viking Voyage has got that covered as well with a medieval-themed song, that sounds nice. The reels make a satisfying wooden clack and the shouts of your crew truly lift your spirit.

Betsoft did a good job with the theme of Viking Voyage. It feels like a part of the game and not just something that was stuck on it as an afterthought.

The symbols in Viking Voyage feature your crew, their gear and metallic plates with the numbers from ten to ace. These metal symbols struck me as the odd one out. Why not just use runes, as they would fit the theme better.

Most of the normal symbols don’t have much to offer when it comes to wins. Even the mid-tier symbols barely cover your wager for the round.

The high volatility plays a big part in Viking Voyage. You will encounter long dry spells before you hit anything good. Getting on that boat and starting up those free spins is a big requirement for any major wins.

Viking Voyage has everything but the kitchen sink in it. There are features galore and everyone should find something they like here.

243 paylines basically means that you don’t need to worry about paylines at all. If the same symbol appears on at least three contiguous reels starting from the left, you will get a win.

Odin’s ravens, Huginn and Muninn are watching over your journey. Get three ravens anywhere to get a scatter win. Five ravens in a row is one of the best combinations you can get in this slot.

Wilds are represented as Viking Warrior Kings and they are fearsome leaders of men. Wilds only appear on reels 2, 3 and 4, and they are all stacked. If you get a complete Warrior King wild on your reel, the wild symbols are locked in place and you get a free re-spin.

Come onboard the longboat and cast away to the sea of free spins. Get a bonus symbol on reel 1 and 5 and your journey can begin. The sky turns blood red and you get to enjoy 10 free spins with a 3x multiplier.

If you can’t be bothered to wait for the longboat, you can buy one yourself. Just hit the Buy Bonus button and get 12 free spins straight away. The cost is 70x your wager, but you can get it for less. If you get gold coins in the main game, you get a discount. The discount is tied to your current wager and it will await you if you play with a different wager. The discount is there even if you close the game and come back.

One thing needs to be mentioned here. Be careful if you are filling the wagering requirement of a bonus. Buying a bonus is considered a wager, which can easily be over the maximum limit for that specific casino. Check the terms of your bonus and if possible, don’t use the buy a bonus feature while playing with a bonus of any kind.

Every time you get a win, you have the option to gamble it for more. Just hit the Double Up button and let it ride. You can double either your entire win or just half of it. Toss a coin, choose heads or tails and see how far you want to push your luck.

Betsoft has found their stride and has been pumping out good slots after good slots. There is something to be said about the games repeating themselves, but the variety in the theme and the mix in the used features does make them feel different. Many games share the same features, but they don’t feel like the same game.

There are some obvious connections here, and if you have played, say Ogre Empire or The Golden Owl of Athena, you are familiar with some of the quirks of Viking Voyage. This is not necessarily a bad thing. Like I said, they are different enough.

I for one liked Viking Voyage. It had a lot of those features that I enjoy in a slot. If it only had some way to chain up multiple wins, it probably would be a perfect game for me. I’m not totally behind the high volatility and the polarized paytable, but thanks to the free spins, it wasn’t that bad.

All and all, this is a game worth checking out. If you have played Betsoft’s game before and enjoyed any of them, then you are likely to enjoy this one as well.

Browse casinos with Viking Voyage and other slots from Betsoft. Create an account and try the game for free before making a deposit.

You can play Viking Voyage in English, Finnish, Swedish, German and 21 other languages. 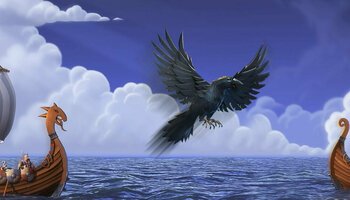