Vikings Go To Hell follows Yggdrasil’s own band of courageous Vikings as they delve into the depths of Hell to find action, adventure and treasures.

Yggdrasil released this sequel to the Vikings series in 2018, bringing the franchise to new heights in animations, action and features. I enjoyed its predecessors Vikings Go Wild and Vikings Go Bezerk a lot, but as the newest iteration, Vikings Go To Hell is clearly superior.

The game continues using the 5-reel, 4-row playing field the previous editions used, this time with 25 paylines. The new setting puts the Vikings in the bowels of hell, reflected by the amazing backgrounds as well as the various enemy characters you’ll face. During the base game, we find ourselves at a desolate wasteland that might be the Viking’s homeland or the entrance to Hell, but as we trigger free spins we delve into the depths and find ourselves surrounded by fire and brimstone.

It’s quite amazing how far the graphics in this series have come. Even though the characters across all Vikings games have been consistent, they look a lot better now. There are a lot more animations in general, from the winning paylines to the fight animations. I also loved the introduction cinematic, which rivalled the one you can find in big-budget video-games.

The sounds are as to be expected on par with the graphics, a loud boisterous sound that evokes imagery of fighting and adventure. To me, it’s a sign the developers took the game seriously when they don’t just play some jingle if there’s a winning payline.

All the symbols in the game are original and fit the theme perfectly. The high-paying symbols are the 4 different characters while the low-paying characters represent the weapons each character uses. By using the same colours they are still somewhat connected.

Each of the Vikings had their own fight animations which triggered during the Free Spins mode. They could either lose against a demon or win, plus there was the cheer animation. When the free spins mode started, we saw the group descend into Hell, with the background changing to represent this.

There are quite a lot of features to go over in Vikings Go To Hell. Some are familiar to people that have played a Vikings game before, others are new.

It should be obvious that’s quite a lot of features and they all largely interact with each other in a meaningful way! It meant that it took some time to get a grasp on all the different mechanics but once it clicked it wasn’t that hard to understand.

The most important thing to remember is that the high-paying symbols, the characters, are able to fight under the right circumstances. When this happens they can either win or lose. Losing does nothing and still allows them to be part of a winning payline as themselves. When they win, they turn into a Sticky Wild.

Characters generally don’t fight during the base game, except when there are 2 free spins on the screen. During free spins mode, they fight every spin. If a character is Berzerk, they will always win their fight and turn into a Sticky Wild. At the start of your game, the Red Viking gets 50 Rage to get you started, but every character needs 100 Rage to activate Berzerk mode.

Free Spins mode was extremely lucrative in my experience. It doesn’t show up often, fitting the High Volatility, but when it did it was likely to increase my funds by a moderate to a high amount. Obviously it’s a slot so there are no guarantees, but by how free spins mode functioned it was very likely.

Free Spins mode is divided into two levels, with each of them having a Boss that needs to be defeated by depleting its health. Each boss has 3 health. Defeating them gives the following bonuses:

Vikings Go To Hell is a marked improvement over the previous two instalments in the Vikings saga. It boasts new mechanics, some new features and an entirely new collection of animations and graphics.

I found it to be extremely enjoyable, keeping close to the classic slot experience while enhancing it with a lot of features most players will be familiar with. It created a game that would often surprise me by its speed and the large size of the wins.

The slot allows players the ability to choose a bet between £0.10 and £125 per spin, but due to the High Volatility, I’d urge caution when using big bets. Free spins mode could have significant returns but that mode comes pretty rarely. Trying to get to it would mean spending a long time in the base game which could drop your funds to zero before it triggers. Lower bets give lower returns but also allow you to last longer. Although the game only has a relatively low max. win of 450x your bet, it regularly awards big numbers anyway.

Whether you’re a Yggdrasil fan, a Vikings familiar, someone who enjoys a lot of features or just someone that likes attractive slots, Vikings Go To Hell will definitely appeal to you. I suggest you give it a try and see which part you like the best!

Browse casinos with Vikings Go To Hell and other slots from Yggdrasil. Create an account and try the game for free before making a deposit.

You can play Vikings Go To Hell in English, Finnish, Swedish, German and 18 other languages. 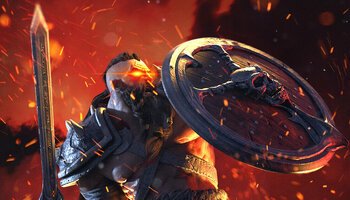