Vikings is the slot based on the popular television show that follows the adventures of Ragnar Lothbrok on his quest to become a Viking king. The slot boasts a special Raid Mode, stacked reels and of course, a lot of amazing art.

The game was developed by NetEnt in cooperation with the History TV channel to create a slot that captured the style and feel of this epic show. The game is soaked in images from the series including pictures of the lead characters, special animated backgrounds and different features that drew inspiration directly from the Viking setting.

If you like this type of adaptation of a popular franchise into a slot, you should give Netent’s Planet of the Apes a try. This game is based on the first 2 movies of the rebooted Planet of the Apes series which combines imagery from the movies with the special features you’d expect in these slots!

I personally only watched a few episodes of Vikings but it seems that it grabs the style of the show very well. The characters feature prominently in the game, and there has been plenty of time spent on adding animations and features that evoke the same style.

Vikings has a series of special symbols that are based on the different characters in the game. The rest of the symbols are made up of high-cards with a slight tweak to fit the style but not enough to really stand out.

The symbols are pretty, especially the different character symbols. They’re lightly animated when they’re part of a win. I thought the card symbols were a bit disappointing since they’re barely edited. Other games with a Viking or Nordic theme like NetEnt’s own Asgardian Stones made the symbols look like runes. This simple detail does a lot to make it blend into the theme instead of just having the normal numbers and letters.

As is common with NetEnt slots that incorporate some existing property, Vikings is filled to the brim with features. Some of these are pretty simple and common, others require some more explanation.

First an overview of the features:

These features all worked well together and were pretty obvious in their functioning without having to rely on the paytable. The stacked symbols are probably the most common during the base game, although they also appear during the free spins mode. These are the character symbols extended to 1x3 size.

They can stop at any place, either only covering 1 or 2 spots on the reel but sometimes they fill the entire reel. Reel 3 and reels 3, 4 and 5 during Raid Mode act differently when a stacked symbol fills the entire reel since it turns all other character symbols on the screen into the same character. This can create paylines but even disconnected symbols will award their coin value. They don’t even have to be present on consecutive reels!

The Shield Wall feature is also something that appears during the game, both the base game and Raid Mode. The Shield Wall turns up after the reels stopped spinning but before wins are calculated. They appear as a series of shields, usually in a 2x3 or 2x5 shape but they can be different shapes as well. The symbols behind the Shield Wall are all changed in the same character symbols, often creating paylines of three-of-a-kind up to five-of-a-kind.

Finally, getting 3 Scatter symbols consecutively on reel 3, 4 and 5 will trigger Free Spins mode. This is called Raid Mode in Vikings. The playing field is transformed into a 7-reel, 5-row size with a total of 78,125 paylines. The middle 3 reels have a box in them that acts as reel 3 in the base game, where any stacked symbols that stop in them will transform all other character symbols into the same one. They will also count as scatters, meaning you get a payout no matter where they are on the screen.

All in all, that’s quite a lot of features whichI’ve come to expect from NetEnt slots. The game looks beautiful, especially the transitions between game modes which have been done well. The graphics look very good and the backgrounds put me in the right mood. I did think the card symbols were a little lazy and it’s strange that they didn’t give them a similar treatment as the character symbols.

If you’re a fan of Vikings you can’t really afford to miss this slot. It uses all the popular characters, is seeped in the atmosphere of the show and is a lot of fun to play. People who aren’t familiar with the TV series but enjoy either a Viking setting or a modern slot with lots of features will also get a kick out of it.

Are you a player that prefers to spend his or her time with a classic fruit machine with limited features and not a lot of flash, you probably won’t get as much enjoyment out of the game. I personally had a good time playing it even though I haven’t watched Vikings in years. The art is gorgeous and the different mechanics worked well together.

Be aware that the game has a High Volatility which means that wins come far apart. You can negate that risk with the ability to choose a bet between £0.20 and £100 per spin. A staggering max. win of 10,000x your bet does make it very appealing to keep playing!

Browse casinos with Vikings and other slots from NetEnt. Create an account and try the game for free before making a deposit.

You can play Vikings in English, Finnish, Swedish, German and 20 other languages. 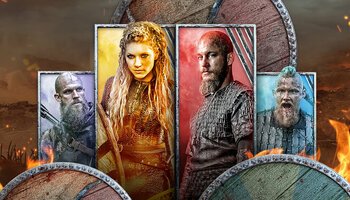