Volcano Riches gives us the interesting idea that there might be some real treasures hidden under the molten lava spewing out of these natural disasters. Explore a Pacific island with Stacked Symbols and Random Wilds to see if there is any truth to it.

This game was developed and released by Quickspin in 2018 and is still considered by many to be one of their best slots. The slot is completely filled with original art, starting from the molten magma in the background to the different symbols that fill each of the 5-reel, 4-row playing field. Fire and lava are massive themes in this game but the creators managed to inject some other colours into the slot as well.

Something that I don’t see often is an entire game filled with stacked symbols, where almost all symbols fill an entire reel. Volcano Riches uses this feature to full effect, using the extra room to show off the creative details of the different symbols. It does make getting wins harder even with 40 paylines, resulting in its High Volatility.

When it comes to the sound, Quickspin opted for a low tempo Caribbean sound with a lot of drums. I thought it set a relaxing mood which was a bit odd considering the fiery setting but this was somewhat corrected during the free spins mode.

Volcano Riches doesn’t use a massive number of different symbols but since they’re almost all Stacked, they do make getting a win harder.

If the payouts seemed correct you’d be right, but keep in mind all these are based on a single payline and if you manage to get the same symbol filling 3 reels from left to right they already pay out the full 40 winlines. It means that it’s very rare for the game to only pay out a single payline at a time, making it more likely that a win will pay out more than the coin bet.

The game has a number of features, none of which will be very surprising for experienced players. There are some differences between the base game and the free spins mode.

While playing the base game I found the features present to show up fairly regularly apart from the Scatter symbols. Wilds were common and frequently facilitated wins. Meanwhile, the Volcano Wilds didn’t show themselves as much but considering their larger impact on the game I didn’t think that was odd.

In fact, I would argue that the Volcano Wilds are the best part of the base game. They can add up to 6 random Wilds to the playing field while any existing Wilds stay on the screen, possibly resulting in massive wins.

Getting into the free spins mode proved to be more tricky and even though I had a quick success at the beginning of my gameplay, in which I activated it after only five minutes of play, it continued to elude me for over an hour afterwards. I don’t think there was any particular reason for it as the requirements are quite simple and the Scatter symbols showed up often enough. It just wasn’t meant to be on that particular day.

Once it did activate it proved to be quite lucrative, owing to the Volcano Wilds again. Instead of only appearing on reel 3 like in the base game, they could now show up on reels 2 and 4, doubling the number of times they could appear. This simply meant more random Wilds filling the screen and because of that increasing the size of any wins.

Still, it was a good thing that the base game was fairly enjoyable on its own because I don’t like playing a base game only to get to the free spins mode. While that mode is definitely an important part of the slot, it’s not required to have a good time.

Volcano Riches has a fun theme that it carries through with its symbols and music. The setting is lighthearted and colourful, using some great effects when special features are activated. Big Wins for example show up in a wave of lava, while the Volcano Wilds feature spews Wilds onto the screen as if it's an eruption. Very neat details that make the game come alive in my opinion.

The game is very accessible as well, with the choice to bet between £0.20 and £100 per spin. When it comes to the jackpot it stays in the middle, offering a max. win of 1,254x your bet. Which isn’t very low but also not extremely high. Because of the way the game works, it might be feasible for a few players to hit it though.

If you enjoy classic slots with some additional features, Volcano Riches is probably a good choice for you. Fruit machine enthusiasts might not appreciate the innovations, but modern players will likely also get a kick out of this game.

Browse casinos with Volcano Riches and other slots from Quickspin. Create an account and try the game for free before making a deposit.

You can play Volcano Riches in English, Finnish, Swedish, German and 22 other languages. 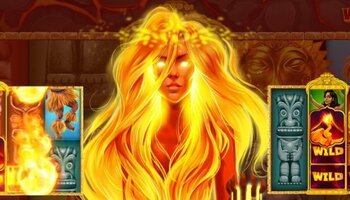