War of Gods depicts a rather literal interpretation of the war between Zeus and Hades as they strive for dominance on a slot that also features expanding reels, sticky re-spins and stacked symbols.

This slot was released in 2021, making it one of Red Tiger’s latest games. This shows in the graphics as the game looks very good, with a tonne of detail and a number of clever animations that help bring the setting to life. During the base game, we find ourselves in the Underworld where Hades resides, surrounded by lava and heavily chained beasts. The symbols on the 5-reel, 4-row playing field are either original art or augmented card suits.

The different symbols are largely static when they appear on the screen, even when part of one of the 30 paylines. Some stacked symbols are given some more room to show themselves off but even here the animations are limited. Still, I did like the small sense of movement this created. I do feel that the symbols might be a bit too similar as the overall colour scheme is quite dark.

When we talk about sound design, there is something to be said for its rather grandiose approach. Especially the two bonus games, associated with both Zeus and Hades, will play more orchestral tunes than the base game. There, the music takes a background approach and will let the player focus more on what’s happening on the screen.

War of Gods features the standard selection of symbols that is found in most slots. The high-paying symbols are originally created for this slot, drawn by hand and given some nice effects. Even though the symbols are different, I thought that the colour schemes were perhaps a bit too similar which made it a little tricky to keep them apart. Whenever there’s a win, the total coin win is displayed on the screen as well as the win line it fell on.

Meanwhile, the low paying symbols are card suits that we can see in many other slots. The designers did put some effort into making them mesh with the setting, having them seem a bit more like some classic carving instead of a simple picture.

Players who choose to try out this slot should be aware of its High Volatility. The slot has low payouts for most of its symbols, only a slightly above-average number of paylines and a big number of different symbols. As a result, even getting an organic win during the base game is unlikely to pay back a single spin. To deal with this, players can pick a bet between £0.10 and £20 per spin.

War of Gods has the following symbols, ordered by importance:

War of Gods uses a number of features that put the two gods on opposite ends of a fighting mini-game, and it’s no different here. The slot also includes two bonus games that will centre around 1 of the 2 Gods, and operate slightly differently.

The features in War of Gods include:

The base game was a rather standard affair for me, offering little innovation in terms of gameplay. The game doesn't have any Wilds which makes it somewhat harder to get a win. It’s clear early on that the goal should be to get either or both of the Gods on the screen at the same time.

The Warring Gods is the only part of the game where it’s possible to get seven-of-a-kind wins, which are also the largest in the game. While I played this slot, I never got this bonus game to trigger.

War of Gods is a nice looking slot with a number of interesting features that unfortunately don’t take a front seat during the gameplay. Even though the two gods make an occasional appearance it’s quite rare to have them activate any of the bonus games. Once they do activate, it was unlikely during my time playing to walk away with a big win.

As a result, my funds went on a steady but inevitable trip down as my losses got harder and harder to recover. I still got my money’s worth in the sense of time spent, but I never felt like I had a shot at walking away with more than what I started with.

Players that are looking for an enjoyable but ultimately costly time will get a satisfying experience out of War of Gods. I’m sure some people will do better than me, and a few might even walk away with the max. win of 2,500x your bet. If you’re someone who enjoys a bit steadier supply of wins, you might want to look elsewhere, however.

Play War of Gods for free

Browse casinos with War of Gods and other slots from Red Tiger. Create an account and try the game for free before making a deposit.

You can play War of Gods in English, Finnish, Swedish, German and 23 other languages. 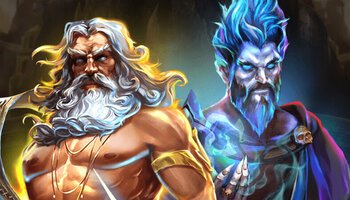