Any Weekend in Vegas can turn into an unforgettable trip. Ask the guys of the Hangover movie. Those who win some can buy more time and those who lose some have paid for the thrill of living it up in Vegas.

The game at hand looks like it combines both fortunes. I am not too sure how I should read the background, which has a guy with a shovel and one who appears to have bet his house on a game of poker.

Weekend in Vegas may appear like a prequel to Hangover the movie, but it is also a lot of fun to play. The 3x5 reel set, 243 ways to win and three features can combine into a fun-loving adventure.

Even though the extra features are the same as those on The Slotfather Part II (also by Betsoft), Weekend in Vegas has a maximum pay potential of 13,548x payline bet, which daubs each spin in fun-loving anticipation.

The graphic design tells a story about three friends having just ended their memorable Weekend in Vegas. Or have they? To me, the symbols and the background hint at a huddle-up by the wolf pack to figure out how to extend the weekend into a full week.

The three main symbols on the paytable are Loony Larry, Balanced Ben and Cautious Chris. Their names are not just the fancy of Betsoft. Each character comes with his own volatility level during the bonus feature. In addition to that, these symbols are fully animated and can land on the reels expanded or in partial view.

I am a tad disappointed because Betsoft didn't furnish Weekend in Vegas with a full stack of picture symbols. The visual aspect of the gameplay could have benefitted of more Vegas-related symbols and more animation, but I'll take what's here because it's good enough to keep anyone interested.

I'll start my overview with the Wild symbol. I wouldn't make a big fuss about it, but the Wild in Weekend in Vegas comes with a couple of caveats.

During the base game, the Wild can only appear on reels two and four, but during the free spins bonus, it can appear on all but the first reel.

The scatter symbol is a police cruiser. The symbol can trigger 8, 12 and 20 free spins if three, four or five scatters land anywhere on the reel set. I like this free spins mode because all payouts are doubled - including those made for the scatter symbol.

At the end of the free spins bonus, the game awards you a spin on the money wheel. This bonus gives you a chance to advance through three levels on the wheel. Each level comes with bigger prizes.

There are three green arrows on the outermost ring that can bring you inside the second ring, where the prizes are more lucrative. I think the odds are fair in this regard. I reached the second level once out of three tries on the Money Wheel, so there is definitely a chance to make come out of your free spins game with more loot.

This is the part of Weekend in Vegas most closely resembling The Slotfather Part II. If the identical character lands in full on any three reels, the game awards you the bonus round which mimics a night out on the Vegas strip.

Your task is to choose one of the six casinos. If there is a payout, the amount you've won is added to your tally. Each good pick adds more cash until you hit a non-paying casino.

The Bonus Round is a game of pure randomness, but it is nuanced thanks to the different volatility levels. You can emerge victorious with either character, but the big win potential is with Loony Larry.

One look at the paytable and you realize that Weekend in Vegas is all about the bonus features.

The paytable structure starts out really low and goes up to only 12x your bet for the highest-paying symbol (dancing pole).

The theoretical Return to Player is 96.60%, which is above average and much higher in comparison to most of the older Betsoft games.

The volatility level is medium, which is what I would have preferred had it been anything else. Medium volatility enables a wide range of odds and this helps the game in its X-factor of surprising you with a big bonus feature win.

In terms of payouts, the paytable structure is as follows:

I enjoyed playing Weekend in Vegas because the game is generous with the extra features. Although the biggest win potential is in the casino-going bonus feature, I prefer the free spins bonus any time. The game doubles any winning outcome and even if you make a single win, Vegas gives you a chance to pocket a decent amount on the Money Wheel.

The truth is, most of my base game payouts were for three or four matching card symbols. The Wild helps, but not as often as anyone would like. So what to do with these small winnings? I just went to the coin flip, Double Up, option to try my hand at doubling the petty cash with each good guess. Sometimes it worked, sometimes it didn’t, but it was a good way of entertaining myself while anticipating the next bonus feature.

I can recommend Weekend in Vegas to anyone. 25p per spin isn’t a cheap amount to simply try the game and get a sense of its whims, but your bet can turn into a decent payback if you chance upon a good turn in the free spins bonus.

Play Weekend In Vegas for free

Browse casinos with Weekend In Vegas and other slots from Betsoft. Create an account and try the game for free before making a deposit.

You can play Weekend In Vegas in English, Finnish, Swedish, German and 22 other languages. 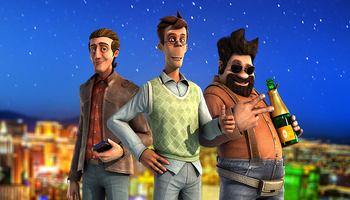