White Rabbit is based on the classic Alice in Wonderland novel, where the rabbit that led Alice into the hole is the main character of the slot. In this game, players are also treated to expanding reels, random wilds and free spins.

Made by developer Big Time Gaming and released in 2017, this game is slowly getting older but you wouldn’t be able to tell from the graphics. Everything on the 5-reel slot with expanding reels is created in 3D, with the clever use of textures to hide its age. Players will get to enjoy a wide variety of famous characters from the book, as well as some simple card letters.

The game uses the megaways feature, meaning that every reel in the game can vary in size between 2 and 7 rows per spin. As a result, players can get a win on anything from 32 to 248,832 bet lines. The game is set completely in Wonderland, offering a nice view of the average landscape with the rabbit hole itself as well as a bunch of mushrooms and a castle in the distance.

Players that enjoy some movement on the screen will probably be somewhat disappointed as there are barely any animations when there is a win. The background itself is also completely static. Only the Caterpillar sometimes wakes up and sends smoke onto the screen to drop in random Wilds.

While Alice in Wonderland itself is famous for its symbolism, the symbols in White Rabbit stay a bit more obvious. The high-paying symbols are the Red Queen and different coloured rubies. These symbols look nice but aren’t animated, even when part of a win.

The low-paying symbols are a mix of card letters and characters. Each has a shared colour and both share the same value. The difference is that the character is 1x2 in size, while the card letters are only a single tile. This means that getting a win with the aid of character symbols is a little easier.

The symbols in White Rabbit include:

There are quite a number of symbols but they work together depending on the size of the playing field. The game doesn’t use classic paylines but any symbol that appears on consecutive reels from left to right will count as a win. Because of this, the slot has Medium Volatility.

White Rabbit has some interesting features that change up the core gameplay, but it won’t be anything some players have never seen before. In a few different ways, the game is remarkably similar to other slots released by this studio.

The features you will find are:

Most of the time, players will find themselves in the base game as I found triggering the free spins mode to be very hard. The Scatter symbols are not terribly common and you need 3 even when only 3 can appear on the middle reels. This leaves no room for error like in other slots, where the Scatters can appear on all 5 reels.

The idea of the varying size of characters and card letters while still counting towards the same win was a fun idea, as it does increase the opportunity of getting a win. On the other hand, it makes payouts significantly lower and players will often require at least two paylines to make their money back.

In the free spins mode, players will be able to get wins that expand the reels, making them longer. The maximum length is 12 rows and reaching this will activate the Queen’s Reel. This is an extra 6th reel that is filled with extra Red Queen symbols and Wilds. Unfortunately, I never managed to reach this point.

White Rabbit is a fun slot that uses a popular novel as a source of inspiration. I would have liked to have seen a bit more creativity in the design of the slot as everything seems almost literally lifted from the animated movie. However, the art that is there still looks good.

The game as a whole was similar to iSoftbet’s Queen of Wonderland Megaways, which also uses the Megaways feature as well as being based on the same novel. However, that slot is a lot newer and has taken a slightly different approach in terms of gameplay and visuals.

If you’re looking for a Megaways slot, White Rabbit is definitely worth your time. Most of the time you’ll be playing in the base game as I found the free spins mode difficult to activate, but fortunately, that should give you enough enjoyment anyway!

The slot allows the players to pick a bet between £0.20 and £20 per spin depending on how comfortable they are with the volatility. Finally, a massive max. win of 37,500x your bet is nothing to scoff at.

Browse casinos with White Rabbit and other slots from Big Time Gaming. Create an account and try the game for free before making a deposit.

You can play White Rabbit in English, Swedish 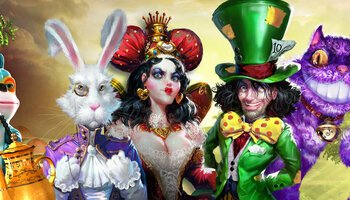