If you too are wondering Who's the Bride, you can read my review of that game and find out why gossip can be beneficial.

The game's premise isn't immediately clear. But, as far as I can tell, there is either a wedding in the preparation or a beauty contest that can end in a nobleman’s hand in marriage for one lucky lady.

In other words, I really don’t know. The premise of this Asian-themed game is confusing and the bland design doesn’t help either. Nevertheless, there are a few points worth getting a mention.

The lucky bride is the one that can get you the big win and the presumed bridesmaids represent five different sticky Wild symbols.

I decided to try Who’s The Bride just to check out the game mechanic, the payout rate and the features. The maximum payout potential of 9,000 coins times your payline bet is pretty alright and the 96.82% RTP is positively appealing.

On the other hand, the game has only nine paylines and high volatility, resulting in uneventful gameplay and

Who's The Bride takes the slot player to a Chinese pagoda which is the potential home of the potential bride. Nothing has been settled regarding the premise, which has made it difficult for me to get into the game.

Maybe someone who's been properly immersed in East Asian culture knows the purpose of the red shoes inscribed in golden Chinese character. As far as the general slots-playing public is concerned, the symbols don't convey any meaning.

The only object on the reel set that is clear about its stated purpose is the palanquin or the carrying chair. Everything else about the game is like a tea-drinking party of giggling, gossipping ladies speaking Mandarin.

The win-enhancing features are centred around the Wild symbol and the set of Sticky Wilds which can land on the reels during the free spins bonus.

The standard wild is a portrait of a woman - presumably the bride. This symbol can substitute for any other symbol on the reels, except the scatter.

The bonus symbol is a gold ergot (a weird hat-shaped thing). You need three symbols like this to get the 12-spin bonus.

Unlike the dreary base game, a couple of good things can happen here - all winning outcomes are doubled and the variety of alternative Wilds can stick on the reels.

A not-so-exciting detail is that the free spins bonus can retrigger only once. On the other hand, NetEnt had struck a balance by letting the sticky wilds remain on the reel set. This way, you have a chance of landing additional wilds to improve your odds for a big aggregate win.

I've noticed there is a pattern in terms of the "numbers" in slot games with a Chinese/East Asia theme. Because the number eight is at the top of the hierarchy of auspiciousness, you are going to see it within the range of bets, along with the number nine, which is also considered lucky.

Coin values range between 1p and 50p and there are four bet levels. In this regard, Who's The Bride isn't overly expensive to play. Even if you decide to make it a high-stakes game, the biggest wager is £18.00 per spin.

Who’s The Bride has an interesting value structure. Don’t be by the low figures for the first half of the paytable because these are juxtaposed against nine paylines.

A 2x your payline bet will amount to a little bit less than one-third from your bet. But, if you win four of a kind even with the 10 card symbol, you’d be winning back your full wager and making a small gain.

Overall, I think the payout structure is actually positive, but keep in mind this is a high volatility game that isn’t eager to make good winning outcomes too frequent. Another detail that I like about Who’s The Bride is that even the Wild and the Scatter are paying symbols.

Regardless of the boring theme, I think the game has some bright moments. I mentioned above the symbol values and the automatic 2x multiplier on all free spins wins. Sadly, this isn’t enough. The graphic design and the lack of character have made it impossible to relate to the game, so I’ll just politely skip this wedding affair.

Play Who’s the Bride for free

Browse casinos with Who’s the Bride and other slots from NetEnt. Create an account and try the game for free before making a deposit.

You can play Who’s the Bride in English, Finnish, Swedish, German and 20 other languages. 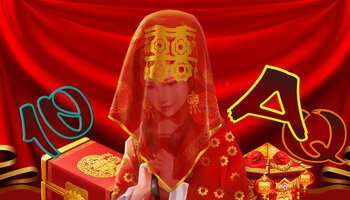