Who Wants To Be A Millionaire Megapays™ slot review

Play Who Wants To Be A Millionaire Megapays™

Who Wants To Be A Millionaire Megapays is the licensed adaptation of the famous television program into a modern video slot. The game not only includes some of the most popular features but also comes with free spins, multipliers and a progressive jackpot.

If you’re at all familiar with the TV show, the appearance of the game will make it abundantly clear what you’re looking at. The background is shaped in the style of the stage, with the familiar blue neon in the dark. Meanwhile, the playing field with 6 rows is placed in the centre of the screen. As the Megapays feature stands for the varying length of each row, this is the main part of the game.

There is also a smaller extra row at the bottom of the screen that extends from reel 2 to reel 4. These can help create wins. The game is developed by Big Time Gaming and released in 2021, which I found a little hard to believe. It’s mostly due to the generic-looking graphics and the symbols that are similar to those of many other slots made by this studio.

This likely won’t be that important for most fans of the show, as this is clearly based on the program. The use of the background and the music help set the mood. There is also a progressive jackpot that will attract a lot of players. Players can get a win on a maximum of 117,649 paylines.

Who Wants To Be A Millionaire Megapays doesn’t show off a lot of creativity when it comes to the symbols in the game. The playing field can be quite massive through the Megapays functionality but this is filled with generic symbols. While the high-paying symbols resemble different coloured gems, the low-paying symbols are simple card letters. All of these are represented in a terrible 3D-gloss effect that hurts my eyes.

As can be expected from a slot like this it has High Volatility, with an RTP of 96.38%. During the game, this translates into getting a win quite often but these wins being too low to make back your initial bet. As a result, I found my funds to drop down quite steadily. The few times I managed to hit the free spins mode I did manage to get some big wins.

The player can always augment their bets to deal with the volatility. You can pick a lower bet so that your funds drain slower. It’s also a possibility to go for bigger bets so that when you do hit a big win it will compensate for your faster losses. To do this, the game offers the choice of a bet between £0.40 and £30 per spin.

This game has a listed maximum win of 72,310x your bet which is already huge. This is if you would hit the maximum win organically through the game itself. There is also a progressive jackpot which you can win through the special feature. The jackpot can theoretically keep growing forever.

Who Wants To Be A Millionaire Megapays uses a number of unique features. The ones that are there do help bring the game to life. The most fun part is the free spins mode where the player has to answer a series of questions to win the jackpot.

When playing the game, I was spending almost all my time in the base game. Hitting the free spins mode was almost impossible and I only saw it appear once. When it did show up, I managed to hit a big win but it’s not guaranteed. There is an unlimited multiplier that increases with every free spin. The bonus game can help you get more free spins, but it can also end the free spins mode prematurely. You can always decide to skip it.

Who Wants To Be A Millionaire Megapays is a loving tribute to the original television program. It’s too bad there hasn’t been that much attention put into the presentation. Surely there were more original symbols than gems and card letters that could have been used. This makes the slot feel more generic than it should.

The gameplay is alright although the most interesting features are hidden behind the free spins mode. I found it very hard to activate this part of the game. If you do manage to do it, you can actually play something that resembles the TV show. Instead of real questions, you will have to choose between just A, B, C and D with no indication which one is correct.

If you’re a fan of the game you might enjoy this slot. Players that are not that connected to the original TV show will probably not be that interested. There are plenty of games that have the Megapays functionality and more interesting visuals.

Play Who Wants To Be A Millionaire Megapays™ for free

Browse casinos with Who Wants To Be A Millionaire Megapays™ and other slots from Big Time Gaming. Create an account and try the game for free before making a deposit.

You can play Who Wants To Be A Millionaire Megapays™ in English, Swedish

Who Wants To Be A Millionaire Megapays™ supports GBP, EUR, SEK, CAD and 2 other currencies. 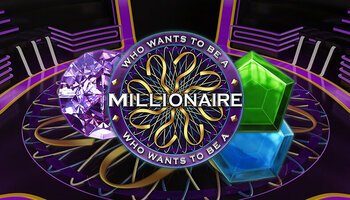