Wicked Circus is the second attempt by Yggdrasil to make us enter a depraved joker’s domain and see what we can drag out of there!

Wicked Circus seems to be the unofficial 2016 sequel to Yggdrasil’s 2015 slot The Dark Joker Rizes. While at first glance they might look quite different, there is a lot under the surface that makes it clear they’re based on the same premise.

This slot puts us in a decrepit circus where we watch a joker toy with us as the 5-reel, 3-row playing field with 10 paylines spins in front of us. While The Dark Joker Rizes took place in a dank dungeon, the gameplay remains largely the same.

The entire slot hinges around the so-called Jokerizer Mode, enabling players to use their wins to spin instead of their funds. While wins are more likely in Jokerizer Mode, it’s also completely possible to lose all your wins by spinning in this mode. It’s a constant judgement call to decide whether you want to collect or keep spinning.

Why Yggdrasil decided to release a sequel of sorts only a year after the initial game, I don’t know. It could be that The Dark Joker Rizes edged a little too close to the Batman copyright since Wicked Circus is very obviously related to the Joker card, and not the Joker character. Or maybe they got feedback from players that found the setting too upsetting because Wicked Circus has toned down the scariness a lot.

Wicked Circus has taken a step back from Yggdrasil’s highly creative style and resorted to classic symbols. Although they look beautiful they are not very original. Comparing it to The Dark Joker Rizes with its Frankenstein Melon symbol or the Grapes with eyes, there is none of that in this slot. The only thing that really has character is the Joker symbol.

Each of the symbols looks good but is static except for the Joker symbol, which smiles and laughs when he lands on your reels. I thought it was a little disappointing but it might have to do with the reason they released this new version of what is essentially the same slot.

If you are already familiar with The Dark Joker Rizes these features will be familiar to you, but assuming you don’t I’ll go over them quickly:

As you can probably tell, everything in this slot revolves around the Jokerizer Mode. It triggers any time you get any win. Considering the game’s High Volatility that didn’t actually happen that often. Upon entering Jokerizer Mode the player is given the choice to either collect their winnings outright or use them to spin in this mode.

In my experience, the best course of action was to simply collect the Winnings. Even though there are better odds at winning in Jokerizer Mode because you only need 2 instead of 3 Joker symbols, the odds of winning a standard payline is still very small. It meant that if I didn’t get 2 Joker symbols at the same time, I simply spent all my coins fruitlessly.

Once you get 2 or more Joker symbols in Jokerizer Mode or 3 or more in the base game, then you get a Mystery Win. Depending on the number of Jokers you get, the amount you win increases. If you’re in Jokerizer mode you’re still given the choice to spend the coins for more spins, or if you want to Collect.

I found the Jokerizer mode to be quite facetious since the lowest amount of coins you can win with the Mystery Win is with 2 Joker Symbols. It means that as a player you are enticed to use the Hold Function to keep going with the appeal of getting more Joker Symbols. In reality, it’s probably best to Collect immediately and get back to the base game where getting 3 Joker Symbols is almost as likely.

Wicked Circus was a very odd game for me, mostly because it seems like a watered-down version of a game that was released only a year earlier. All Yggdrasil games look good and it’s no different here, but at the same time the developers took out a lot of personality.

I couldn’t help but be more intrigued by the story behind the slot than the slot itself. Maybe the creators just fell in love with the concept and wanted to immediately try a new version of it. Maybe the Jokerizer concept was very popular with casinos because it puts the responsibility of collecting wins with the player! Who knows, but I think it’s telling that I was more interested in that than the game itself.

To be fair though, the game is solid. It has an interesting mechanic that really emphasizes its high volatility. There were a lot of spins without any win and each time the Jokerizer Mode triggers its a decision to use your wins on more spins or not. I eventually decided I’d just collect each win and continue playing mostly in the base game, but that was missing out on basically half the game.

You can choose a bet between £0.10 and £20 which isn’t very high, and with a max. win of 600x your bet it’s also not a very high payoff. Considering the volatility, I wonder if it’s worth the risk of not winning for a long time when the odds of making your money back are so small. That’s up to every player to decide for themselves.

Browse casinos with Wicked Circus and other slots from Yggdrasil. Create an account and try the game for free before making a deposit.

You can play Wicked Circus in English, Finnish, Swedish, German and 18 other languages. 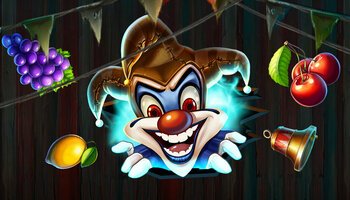