Wild Cauldron is the slot that brings players to a fantasy alchemy laboratory where an alchemist is seemingly busy trying to create something. Distracted by little monsters, players will be able to enjoy cascading reels, sticky wilds and expanding reels.

The game itself was created by studio Quickspin, one of the biggest names in the industry and often the source of some excellent slots. This one was released in 2020, making it one of their most recent games. Players who open up the game for the first time will be treated to a 6-reel, 4-row playing field that has room to expand upwards to create a maximum size of 8 rows high.

The graphics are nicely done as can be expected from this developer, with a cartoony feel to this setting. The background shows us seemingly at a laboratory with a clear view of the night sky. Flanked around the cauldron and the playing field are different items that enhance the idea, such as old books, candles and a wizarding hat. The symbols themselves are both colourful monsters and abstract symbols.

In total, the slot features 4,096 paylines on the starting playing field, which can expand to a sizeable 262,144 paylines when the playing field reaches its maximum size. Even so, getting wins isn’t enough as a single one will not pay out a lot. Instead, the game relies on bigger wins thanks to the cascading reels mechanic. This is why the game has a listed High Volatility.

Wild Cauldron is never really clear about what the alchemist is trying to create but the fact that little monsters pop up might give players the idea that they were the purpose of the experiments. As the game plays, these monsters will be part of wins but those, unfortunately, do not have any animations. Since the playing field has to take up a lot of room, the symbols are small and it is hard to pick out any details. Through the clever use of shapes and colours, everything does stay easily distinguishable.

The game plays well and is easy to get into, even for players who aren’t familiar with the cascading reels mechanic. The winning symbols light up and will remain on the screen while all the other symbols are replaced, a fun reverse of the usual way this feature works. The game also makes sure you can always see the total coin win at the bottom of the screen.

During my time playing, my funds stayed relatively stable and I even managed to make a bit of profit. Obviously, considering the high volatility this isn’t guaranteed and players should take steps to prevent losing all their funds before they can get a bigger win. The game does facilitate this somewhat by offering the opportunity of picking a bet between £0.10 and £100 per spin.

The symbols you’ll find on the screen include:

Wild Cauldron is not a standard slot in a lot of ways, but it does use familiar features. I wouldn’t call the game experimental as it resembles a lot of other slots that use cascading reels, but it did shake things up a little bit.

The features you’ll find here include:

The game relies heavily on the cascading reels mechanic as the payout for a single win is very low. As a result, players that don’t get a series of wins on a single spin will notice a sharp decrease in their funds. While I started off with my funds staying rather steady, at some point the cumulative wins stopped coming and it started to quickly drain my coin count.

Wild Cauldron is a great-looking slot that has some interesting visuals. I appreciated the way the designers set the mood by creating a laboratory with nice details. Unfortunately, the nature of the slot meant that the symbols couldn’t have a lot of room which made them very small. It took away from the details.

The game feels rather static, even with the cascading reels mechanic. The symbols don’t move and there is little movement during the base game. When the free spins mode is activated we see some more smoke and flames, but I feel like that could also have been part of the regular game.

If you’re a player that enjoys the features that you can find in this slot, it’s almost a no-brainer to give it a try. You should be aware of the volatility as it can be quite punishing and you’d do well making sure you can play for quite a while. Finally, the game allows a max. win of 21,199x your bet which is obviously massive and might convince some players to try it out as well.

Browse casinos with Wild Cauldron and other slots from Quickspin. Create an account and try the game for free before making a deposit.

You can play Wild Cauldron in English, Finnish, Swedish, German and 16 other languages. 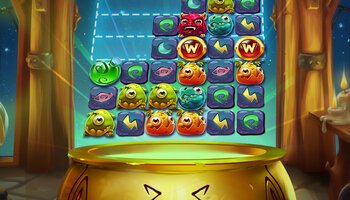