Wild Chase: Tokyo Go is the second instalment of the Wild Chase series and brings us to a new location. The game also gives us expanding reels, walking wins and a collection of high-fidelity art to fill these reels.

The slot was obviously designed and released by Quickspin, the studio also responsible for the first game and became available in 2019. Players will be shown a backdrop that is reminiscent of Tokyo, moving slowly as the camera follows the sleek sports car in the foreground. The playing field is made up of 5 reels but these come in different sizes.

While reels 1 and 2 are 3 rows high, reels 3 and 4 are 4 rows and all subsequent reels are 5 rows. The unique feature of this game is that whenever there’s a win, the reels will move to the left, creating a bigger and bigger playing field. If the players get 4 or more wins, they’ll play on the maximum 5-reel, 5-row playing field. It might sound confusing on paper but the game does a good job visually showing what is happening.

There is also a soundtrack to go along with the gameplay. As can be expected for a slot that focuses on a slick sportscar and a sexy lifestyle, this music features an upbeat electronic sound that has heavy bass and that seems to speed up as the player gets multiple wins in a row. The sound effects are a bit more standard and only really help in punctuating wins.

Wild Chase: Tokyo Go uses completely original symbols created specifically for the game. There are no card letters or suits to be found here, instead, everything is designed and created from scratch. Players will still be able to get a feel of the value of each symbol through their distinctions, with the different characters as the high-paying symbols while the random objects have a lower coin value.

Players will be able to pick their bets between £0.20 and £100 per spin which might be a smart move since the slot has High Volatility. The gameplay depends heavily on getting a series of wins and that’s not always as easy. Getting one win isn’t enough to really get enough coins back for a spin. Even so, I found my funds to decline only slowly over time and it never really felt like I was losing all the time.

An incentive to keep playing any slot is the jackpot, and this game also features one. The max. win of 2,757x your bet can be a nice sum to add to your funds but comparing it to other slots with similar volatility this game lags behind. If you’re a power player that is looking to win the biggest jackpot, you might want to keep looking elsewhere. For casual players, it’s a nice sum to aim for.

When it comes to the symbols, you can encounter the following:

Wild Chase: Tokyo Go relies heavily on the expanding reels and walking wins mechanics, meaning they have opted not to include too many other features. I think this was a smart choice since this already departs quite far from the standard gameplay. As such, offering to keep things relatively simple is a benefit.

The features that are part of this slot include:

Players are always on the hunt for a series of wins, as they will expand the playing field. Each of these wins will also automatically trigger a re-spin, meaning that the subsequent wins won’t cost anything. This is direly needed as the payout for a single win is very low, even the longest paylines pay out very little.

I found it relatively easy to get at least one win but getting more wins was a lot harder. Getting to the point where the maximum playing field size was reached was perhaps the trickiest. I think I managed to do this only a handful of times over more than an hour of play. When it does happen, big wins are still not guaranteed as the super respin functionality is in no way a guarantee for it to actually trigger extra winning symbols to appear.

Wild Chase: Tokyo Go is a slot that leans heavily on its appearance. The game looks great and offers players a good way to immerse themselves into the setting. The symbols that are present on the screen are all unique and bring the style to life.

When it comes to the gameplay, it’s all a matter of taste. The expanding reels mechanic is something that players will have to decide for themselves if it’s something they like. Coupled with the walking wins and re-spins functionality, it creates quite a stark difference with the standard gameplay most slots use.

If you’re looking for the sequel to the original Wild Chase or you’re in the mood for something new, this slot might be a nice change of pace. Players that are looking for a classic gameplay experience will not find that here.

Browse casinos with Wild Chase: Tokyo Go and other slots from Quickspin. Create an account and try the game for free before making a deposit.

You can play Wild Chase: Tokyo Go in English, Finnish, Swedish, German and 16 other languages. 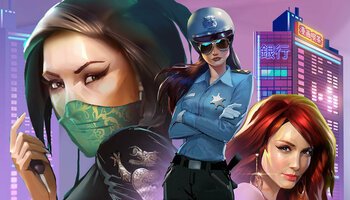