Wild Circus is a strange place where the public goes to be entertained by a collection of interesting performers who give us the best show they can give. From bonus games and free spins to multipliers and wilds, they have it all.

Developed by Red Tiger and released in 2018, Wild Circus promises to deliver an action-packed experience to its players. The game is obviously set in a circus with a cannon set to the side of the 5-reel, 4-row playing field and the middle of the ring behind the reels. Players are also shown a large collection of symbols that are related to this special event which is used to pay out along 40 bet lines.

There are a lot of animations in this game, ranging from the different symbols during the base game to the characters that take centre stage while the bonus games play. We have elephants balancing on balls, the ringmaster breathing fire and a strongman lifting coin wins. All are animated in different ways to bring these activities to life.

What kind of music do you expect from a circus? If you were thinking of circus music then you have a good idea what you’ll be treated to playing this slot. The classic circus tune plays in high tempo during the special game modes, while taking a little slower approach during the base game. It’s not terribly original but it does a good job at setting the mood.

The high-paying symbols are various items you can expect in a circus, from juggling pins to a magic hat. They aren’t animated when part of a win but do look excellent. There are quite a large number of different symbols but coupled with the special features that triggered often, the game lands on a Medium Volatility.

I thought the symbols looked excellent, with a lot of variety in colour and style. They all fit the theme well and bring the circus setting to the forefront constantly. The main draw of the game is the many bonus features which I will get into next.

Wild Circus uses its theme by adding a number of different features, each of them portraying a different attraction of the circus. They aren’t individually activated through different means, instead, the base game offers only a special Bonus Symbol that is required to activate a living cannonball who will pick for you. Players can always choose to try again, or they can play the feature that it lands on.

Although there are quite a few features, each of them is its own separate feature which makes it impossible to activate more than one at a time. It is possible for the Penguin Cannon to land on a double feature, which means that there are 2 features activated one after another.

All of the features are pretty self-explanatory and you are given a quick reminder at the start of the feature. Most of them require some input from the player as well. For the fire-breather you have to pick a torch, the bear on the tightrope requires you to steer him from side to side, while the strongman only lifts the coin win that you pick.

For that reason, it’s not a great slot for players that enjoy to simply spin the reels and switch their brain off, or who like to play with the Autoplay function enabled. Wild Circus simply interrupts this too often with the special features to really work.

Wild Circus is a wild ride, with a lot of features that each transform the game in their own way. The graphics are great as well as a large number of animations that are put into the game to keep things moving.

Players that don’t mind to keep their attention at the slot they play will have a good time playing this. The different features all require some kind of input from the players, making you feel more involved in the gameplay and making big wins more satisfactory. The base game feels less important though, mostly acting as a means to get the 3 Bonus Symbols required to trigger the Penguin Cannon.

Players have the ability to pick a bet between £0.10 and £40 which isn’t the greatest selection, but a potential max. win of 2,000x your bet makes up for a lot. During my time playing, I found my funds to trend upwards even with an average-sized bet, but this will, of course, be different for everyone so keep an eye on your bets.

Browse casinos with Wild Circus and other slots from Red Tiger. Create an account and try the game for free before making a deposit.

You can play Wild Circus in English, Finnish, Swedish, German and 18 other languages. 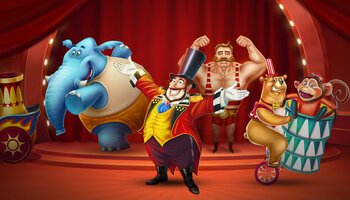