Ah, the Nordics - endless inspiration for so many sagas and fantastic stories of heroes and supernatural powers. Imagination sure ran wild among the inhabitants of that realm and it rubs off of slot players who are welcoming to the Viking vibe.

I've played a number of slots in the same category as Wild Nords and quite honestly, it's been difficult to find a game that doesn't look and feel exciting. If I can single out one, it would be Troll Hunters and its sequel by Play'n GO. But here we have a game that was made by another Nordic company - Red Tiger, so they feel right at home with the theme.

Wild Nords can pay up to 1,000x your bet and can play across three rows and five reels. My personal highlight of the game is its two-way-pay system which is not too common and is sought-after for that reason.

Those who have played the game may be asking, but how can that compare to the set of extra features? Well, it can’t and doesn’t, because it’s all part of the base game action so you get a full treatment to not just one sudden boost of odds.

Playing Wild Nords availed a thrilling ride thanks to four randomly-triggered reel modifiers. The fact that the game is substantially animated and pretty at that enables you to kind of feel part of the Nordic landscape.

In addition to the moving parts, that is, the set of lively warriors, Wild Nords peppers your visual field with snowfall and totem-like animal symbols. The other half of the symbols are just the royal and high cards but I don’t think that this fact alone can steal away from your visual part of the adventure.

The sound design is just as exciting as the graphics. I think that Red Tiger has gone beyond what may be deemed as "sufficient" in terms of not allowing any room for a lull of dead silence. What I like most about Wild Nords is that the cheerful and peaceful background music is punctuated by warlike shouts and the clanking and striking of weapons. It works perfectly.

I mentioned that Wild Nords is a two-way-pay system so I'll just quickly describe it for the slot players who haven't tried it yet. Quite simple - payouts can post both from left to right and from right to left across the 20 paylines.

The game doesn't come with a free spins bonus, but surely there can be plenty of respin events with the help of the wild symbols. In my experience, the reel modifiers had been triggering quite frequently and the respins tend to turn up favourable outcomes. This is all thanks to the wilds.

Wild Nords comes with three substitute symbols that are represented by a warrior character. Also, the wilds can pay 30x, 100x and 300x your payline stake for combinations of three, four and five matching symbols on a payline, and that is both left to right and right to left.

Here are the characters and their matching shields from the medium-tier symbol category:

Overall, I am impressed with the features. They may not be different, except in the character that inaugurates the lock and respin event, but at least they are consistent and that makes Wild Nords a slot game that you can return to.

With four reel modifiers in tow, you'd expect there to be a more conservative structure of payouts, but in my opinion the paytable states otherwise.

As it can be expected, payouts for three and four matching card symbols aren't impressive, but as you go up the ladder, things start to look a lot more promising.

The animal shield symbols are medium-tier in terms of payouts and you can expect to win between 0.6x and 10x your bet for five bear symbols.

I stated the high-paying category consisting of the three different wild symbols. These can pay between 1.5x and 15x your bet.

The advantage of playing the game lays in the extra features and the two-way pay system. I was surprised to find out how frequently the reel modifiers can trigger and with that, the game tends to steer you towards the medium-tier winning outcomes thanks to the symbol-conversion feature and the respins.

The introductory screen states that Wild Nords can make payouts that are "over 1,000" times your bet which is decent enough, however, big wins aren't going to arrive often because of the highly volatile model. On the other hand, the payout frequency is incredibly generous, so the ebb and flow of the balance are quite interesting to follow.

Browse casinos with Wild Nords and other slots from Red Tiger. Create an account and try the game for free before making a deposit.

You can play Wild Nords in English, Finnish, Swedish, German and 18 other languages. 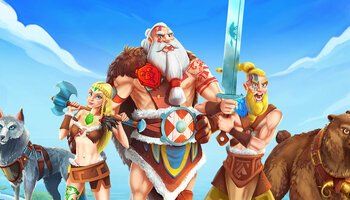