Take a trip to the barren wilderness of the north. Lapland is a harsh and beautiful land, where the wild animals roam.

Play’n GO ventured deep into the mysterious northern parts of Finland, Sweden and Norway. From this experience, they created the Wild North slot, which was released in 2015.

Wild North is built on the flora and fauna of the wintery north to bring you the mystical aspects of the unforgiving land. See the northern lights in all their glory and let them guide you to the bonus features.

This is a thematic game with five reels, 40 paylines, an RTP of 96.55% and a rather unusual paytable. The volatility may be medium, but this is not your standard slot.

Wild North is a game about the wild Nordic nature complete with all the wildlife. The heavy snow on the spruces is beautifully lit up by the remnants of sunlight shining from below the horizon. Light snow dances in air and the weather is brisk and chilling.

The sounds start off quiet, with only the wind blowing in the air. As you start to play and pick up some wins, the sound ramps up as well. Personally, I would have liked the natural silence more, but this is not a bad choice.

I did find one thing to nit-pick about. The game developer mentions that the game is based on Nordic nature, but some of the wood carvings and logo elements are based on North American tribal art.

The animals of the north run rampant on the reels. The four high-valued symbols and the wild are all animals that can be found in the Nordic forests. You also get the northern lights as the scatter and leather bound card symbols from nine to ace.

The fluffy-eared lynx is the wild symbol that can substitute other regular symbols in winning combinations. The lynx has its own wins if you manage to get at least three of them at the beginning of a payline.

The northern light scatters are your key to the bonus feature. Follow them and you get to spin the mythical wheel of fortune and see what you get.

One thing I noticed is that the paytable is surprisingly bottom-heavy. Even the best regular symbol will only give you 6.25x your wager if you get five of them. Maybe this symbolises the harsh northern nature.

Luckily, the game hands out small wins constantly and the special feature is fairly easy to activate. With approximately 100 spins, I was able to activate the northern lights six times. This was lucky, but not far from the rough average.

When you get three northern lights scatter symbols, you activate the bonus feature. The feature starts off with a wheel of fortune, which has seven possible options. Most of them are free spin features, but the rules and special symbols vary a lot. Some are better than others, so hope you get a lucky hit.

Wild North does a great job at depicting the nature of the Nordic north. This is not a common choice, so I can appreciate it when one comes along. When I saw this slot for the first time, I knew I just had to give it a go.

I found the game to be rather polarising. Even though it is medium-volatility, the major wins are mostly limited to the bonus feature. Unlike the high-volatility games, this time the feature activates often.

The bonus feature itself has the potential to be devastating. You put all your eggs in one basket, as you often get only a single free spin. If that spin doesn’t win, it is going to be a big downer. This is something I would have maybe done differently. I’m exactly sure how, but some balancing on the amount of spins.

All and all, I do enjoy this game. The bonuses are clever and innovative, even if some require a whole heap of luck. A big thing for me, is the theme. I love nature and the northern wilderness is a beautiful thing.

Browse casinos with Wild North and other slots from Play'n GO. Create an account and try the game for free before making a deposit.

You can play Wild North in English, Finnish, Swedish, German and 30 other languages. 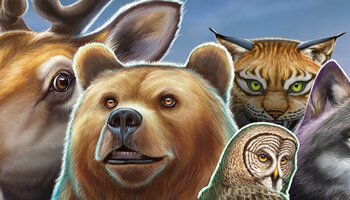