Wild-O-Tron brings to life maybe one of the most interesting issues ever brought forward: let’s look at how robots are made and see if we can get some big wins out of it!

As one of the more original concepts for a slot I’ve seen in quite a while, Wild-O-Tron puts us in front of a robot assembly machine that works tirelessly to produce all sorts of robots. With these machines being churned out it’s almost impossible not to create some winning paylines along the way.

The game was released in 2018 by NetEnt and is made up of a 5-reel, 3-row playing field and 20 paylines. The entire slot is filled with unique symbols that together create different types of robots, easily differentiated through their colour and shape. Occasionally, the game malfunctions and replaces parts with futuristic energy coils that act as Wilds.

The entire game looks drawn by hand, from the symbols to the background and the intro scene. I like that grungy look, making it feel like we were in the heart of some industrial complex long abandoned by people, simply churning out more robots for all eternity.

The soundtrack plays in on the futuristic production style with its winning music, playing beeping and whirring noises. The sound during the spinning of the reels is a little more subtle but still fits the theme it’s trying to establish.

All the symbols in the game are meant to represent parts of a robot. Each robot is 3 parts and acts as a stacked symbol even though they look different. I found the best way to see it was to focus on their colour and not their shape.

I found only the Iron and Scrap robot to kind of blend together due to their colour, the other robots are easy to tell apart since they have distinct colours.

The game has only a limited amount of features but I thought it worked well in the context of the game. The features also keep with the theme of the slot, the idea that there are little bugs in the system that mess with the production but we don’t see any free spins mode or bonus game.

As you can see the features are focused mostly on adding Wilds to the game, which makes sense in the context. These Wilds act as normal and can help create some impressive wins. I’ve seen the entire field light up occasionally because of the number of Wilds added with the Wild-O-Tron mode.

The game has a Medium Volatility which shows quite often by adding a reasonable win at regular intervals. The max. win is an impressive 5,000x your bet which can be between £0.20 and £200 per spin. In my experience though, it was the best move to reduce your bets a little bit because it could happen very quickly that my funds depleted.

I was actually quite surprised by how well the features fit the theme. Most games add features based on what the developers want to include, but here they integrated the features in a meaningful way. A factory produces robots and sometimes the factory malfunctions and adds multi-purpose parts. That translates into slot mechanics as wilds! I thought that was brilliant.

Wild-O-Tron is a pretty new slot even though it doesn’t quite shine through in every way. The graphics are hand-drawn which make it look more raw and industrial. There are only a few special effects and the reels are lightly animated when part of a win. With the lack of features, it means we don’t get a lot of opportunities to see the rest of the world.

One game Wild-O-Tron really reminded me of is Incinerator from Yggdrasil. This is also a slot set in a futuristic industrial setting where we watch a machine do its monotonous task. Definitely recommend you try that one as well if you like this game!

People who enjoy classic slots with a chrome coat of paint and only a few simple features will no doubt have a blast playing this game. Wild-O-Tron delivered me a finely-calculated experience that’s easy but not simple.

Browse casinos with Wild-O-Tron and other slots from NetEnt. Create an account and try the game for free before making a deposit.

You can play Wild-O-Tron in English, Finnish, Swedish, German and 19 other languages. 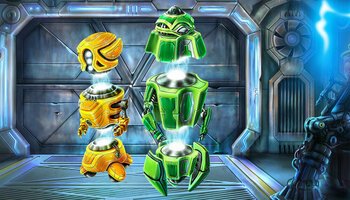