Wild Pride is the thrilling slot that puts us in the African savanna where we’re part of a lion’s pride and seek to survive in the harsh conditions of the wild.

Created by Booming Games and released in 2017, Wild Pride is a slot with a standard 5-reel, 3-row playing field and 10 paylines. The game is set in Africa, emphasised by the background showing a sunbaked plain and the different symbols scrolling down the reels.

The graphics are kind of all over the place in my eyes, with garish bright pink and green symbols on a bright purple background. Some of the symbols even have a panther or leopard skin pattern behind them. It all struck me as rather tone-deaf and ill-fitting the theme of the slot.

I did like the animal symbols that act as high-paying symbols. They are well-drawn and look detailed. Unfortunately, they are only slightly animated when part of a winning payline. The Wilds are very clearly defined luckily, something that Booming Games neglects to do in some of their other slots.

Compared to their other games, Booming Games did include a more appropriate soundtrack with Wild Pride. There is a thumping, drum-based music playing in the background as the reels spin and wins are rewarded with a special drum solo. Getting a win with Wilds or a big win will trigger a special short song with actual singers! I was actually quite impressed by the sound design of this slot.

As I dive into the symbols of the game I’m afraid there isn’t much to mention here that will surprise people. The high-paying symbols are nicely drawn, realistic images of animals that seem to be based on photos. The low-paying symbols are high cards with the aforementioned gaudy colours. I’m not sure why they went for this colour-scheme but I found it to be quite distracting!

Some of the symbols already payout with only two on a winning payline. These symbols are the Wilds, the Zebra and the Antilope. Meanwhile, the two lions (Male and Female) together will trigger a so-called ‘Majestic Win’. This also pays out with only these 2 symbols touching each other either vertically or horizontally.

If you’re at all familiar with Booming Games you probably already have a good idea of the features in this game. They haven’t shown a ton of innovation in their game design and the number of features they include in their games have been very static as well.

Still, a quick overview of the features in Wild Pride:

With the game’s Low Volatility I had a decent time getting frequent wins, although my funds did keep shrinking rather steadily during my time playing. Compared to other slots like Classico where I found my funds to stay more stable, I think the game might lean more towards medium volatility.

The multiplier was a welcome additional feature in Wild Pride, with a standard 2x multiplier during the free spins mode and big multipliers whenever I got the Majestic Win. The Majestic Win was actually quite a regular occurrence while I played, with the Free Spins mode being a lot rarer.

One thing to note here is that I found the Scatter Symbols to be very timid and unremarkable in an artistic sense, the Ox not standing out from the other symbols at all. It also did not have any indication it was the Scatter symbol. I thought this was strange because comparatively the Wild symbol is very blatantly a Wild, with special animation and the words Wild Pride on it.

The features did a good enough job to keep the game slightly interesting, but there was very little required of me and I spent most my time waiting for something to happen. The Free Spins mode doesn’t trigger quite enough to really profit from the 2x multiplier and the Majestic Win payout also isn’t quite that high to offset the rarity.

Coming from Booming Games, this slot is exactly like the other games they have released. There is some competence here and the setting is realised well enough but there is no innovation or challenging the status quo to be found. If you’re a fan of classic slots with basic graphics and simple features, you’ll enjoy Wild Pride.

Players that are looking for even a slight change of pace won’t find it here. The only real excitement I could find was choosing a bet between £0.10 and £200 to see how well this paid out. My advice to you would be to keep your bets low or you’ll burn through your funds very quickly. The max. win of 1,725x your bet isn’t the worst but not really worth the risk either.

Browse casinos with Wild Pride and other slots from Booming Games. Create an account and try the game for free before making a deposit.

You can play Wild Pride in English, Finnish, Swedish, German and 23 other languages. 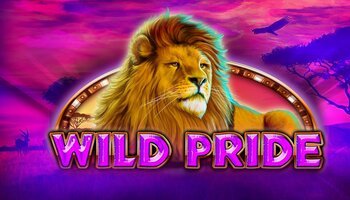