Wild Seas sees us on the wild seas, exploring dangerous coves and well-protected settlements as we strive to find treasure. The game entices us with Walking Wilds, a bonus game and Sticky Wilds. Avast!

This game was released in 2018 by Elk Studios. It shows off its graphical prowess with a great collection of amazing symbols as well as a beautiful background and a big number of different animations. The background is actually a top-down overview of some bustling part of the pacific ocean, populated by small towns and hidden coves.

The symbols themselves are all original and made to fit the theme as they fill the 5-reel, 4-row playing field, consisting of things like coins, characters and of course a fair collection of ships. There is even a special bonus game where you and your pirate ship are tasked with stopping a convoy of Wilds that sail across the screen. With an impressive 178 paylines, the game makes it easier to get a win, which the Medium Volatility can attest to.

If you’ve ever seen one of the newest Pirates movies you’ll have a good idea of what the music sounds like. During the base game, this is still pretty toned down but you can hear the classic orchestra build-up that is associated with this setting. The music doesn’t really pick up until the bonus game, where you get the thrill of pirate activity to be emphasised by the rousing battle music.

All the symbols in Wild Seas are uniquely made for this slot and made to fit the theme as well. There are doubloons in different denominations as well as dangerous pirate characters. These make up the majority of the symbols in the base game. During the bonus game, the ships appear that act as Walking Wilds but more on that later.

Again a slot with a very low number of symbols, just like other Elk Studios slots such as Kaiju. Still, the medium volatility balances out the relative difficulty of getting a win, even though consecutive symbols from left to right always count. Players can use the ability to pick a bet between £0.20 and £100 to decide their involvement.

Wild Seas has a few very appealing and fun features on offer. They can be divided into those during the base game and the bonus game:

The base game felt like a placeholder, only intended to pass the time between bonus games. This wasn’t a waste of time since I did get regular wins playing this part of the slot, but it was very light on features and did not offer any possibility of getting big wins through special features.

Once the bonus game activated, the following features also activated:

The bonus game starts with Stop the Convoy. The game randomly selects 1 of the 3 captains and replaces all Captain symbols with the same one, making it more likely to get a win this way. Then, row 5 is filled with ships that act as Wilds. These ships move from right to left, one reel per spin. These are Walking Wilds.

Every spin, a pirate ship can appear on reel 5. If the pirate ship is on the same row as a Walking Wild, it will shoot at it. When it’s hit, a hit is guaranteed, the Walking Wild is stopped for a spin and becomes a Sticky Wild for that spin. This can happen to every Walking Wild on the screen, as long as the pirate ship appears on the correct row.

If a ship is hit 3 times before it disappears off the screen, it turns into a treasure chest. This treasure chest acts as a Sticky Wild and does not move. It stays in place until all Walking Wilds have sailed off-screen.

Once this happened, the second part of the Bonus Game starts. Here, additional closed chests may appear on the screen. If a pirate ship is on the same row as the closed chest, it will shoot at the chest. This will cause the chest to open and also become a Sticky Wild. However, there are also dynamite barrels that appear. If a pirate ship shoots at one of those, the bonus game ends.

I found this bonus game to be delightful to watch, and it was also reasonably clear what the intent was. The only thing I had to look up was that the pirate ships only shoot at ships and chests on the same row as them. In general, the bonus game was always lucrative and helped me prop my funds up. Do keep in mind that there can be quite some time between bonus games, making high bets rather risky.

Wild Seas is a fun game that combines beautiful graphics and a very solid bonus game to create a unique and enjoyable experience. I think both modern and classic players will be able to get something out of this game. It does not stray too far from the original gameplay while offering enough variety in its features to keep everybody engaged.

The game offers a max. win of 1,780x your bet which I found big enough to keep me playing, even though it never felt very likely I would get it. Since the bonus game activates often enough, it made it feel like a part of the game and not something that required an excessive amount of playing for it to activate.

If you’re looking for a bright, colourful slot with some real character and great gameplay centred around a single bonus game I would definitely recommend Wild Seas.

Browse casinos with Wild Seas and other slots from Elk. Create an account and try the game for free before making a deposit.

You can play Wild Seas in English, Finnish, Swedish, German and 19 other languages. 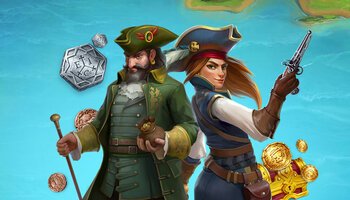