Wild Toro gives players the opportunity to visit a rustic Spanish village where a charismatic bull-fighter spends his day mostly seducing women. The game features walking Wilds, Free Spins and Re-Spins to make it all worth it.

The game was developed by Elk Studios and released in 2016, making it one of the slots that were released when the developer still put a lot of time and effort into their games. This is showing whenever you start up Wil Toro, where the 5-reel, 4-row playing field is filled with all sorts of animated symbols. The game is seemingly set at the central square of a tiny Spanish village.

All the symbols are original, although the low-paying ones are simple coins. Still, I always appreciate the extra effort put into a slot. The game has 178 paylines that run from left to right. When there’s a win the symbols on the payline will move more or less depending on their coin value.

I wasn’t quite sure what I would expect a slot like Wild Toro to sound like but I definitely got something else. The soundtrack is largely absent during the normal spins, with a guitar string playing with every spin which got quite annoying quickly. In the background, we can hear people speaking to enforce the idea we’re at a town square. There wasn’t really any music until the re-pins mode activated but even then it stayed simple and generic.

The symbols in the game are only slightly related to either Spain or the tradition of bullfighting. I would have expected some more references to the event, even if the creators obviously wanted to avoid the more bloody aspects of the famous activity. Most of the symbols are different types of coins while the high-paying symbols are random items. They are all drawn beautifully but I feel like they could have been chosen more carefully.

The slot doesn’t have a lot of different symbols but the lack of Wilds and special features during most of the game means it still has a High Volatility. During my time playing, I found the wins to be rather rare, especially the bigger ones. The Toro feature was rare but the Re-Spins mode triggered even less.

Wild Toro is rather simple when it comes to the features but I did like the ones that were there. It’s unfortunate both the Walking Wilds and the Re-Spins features were rather rare.

In my experience, most Elk Studios slots have the Ways To Win feature. Although this is supposed to make wins a little more likely, the high volatility contradicts it. I also found that the wins weren’t as likely but in fairness, it would also make longer paylines more likely. I would often end up with multiple wins in a single spin too.

Expect this slot to have you spend quite some time spinning the reels without a single win before being awarded by a bigger win. The player can choose a bet between £0.20 and £100 per spin to help balance this risk a little.

The Wilds pay a big part of the game even though they aren’t very common. The normal wilds function like you would expect them to. The Toro Wilds are walking wilds, meaning they move one reel to the left from their current position until they disappear off the screen. While most slots have Walking Wilds appear on reel 5, this is random for the Toro Wild.

A unique and very fun quirk of the Walking Wild is that a Matador on the screen will send the Toro in a frenzy. The Toro will first move vertically and then horizontally towards the Matador symbol, placing Wilds on every tile it moves over. This can fill the screen with Wilds depending on their original positions.

The final feature is the Re-Spins, which is enabled when the player gets 3 Matador symbols on the screen at the same time. During this part of the slot, the game will re-spin as long as new wins are generated. Once there are no new wins, the re-spins mode stops.

The Re-Spins feature was extremely rare to the point that I had to keep playing the game for longer than I intended, just to see it trigger. This does not bode well for the normal player. Luckily, the Matador symbols also function in combination with the Toro symbol to create big wins so it’s not a huge loss.

Wild Toro is a very pretty looking slot. I really liked the art of both the symbols and the background image. The music was almost absent and when it did show up it felt jarring and unfitting. It feels like there were some beats missing.

When it comes to the features, the Walking Wilds and Wild Toro features can help in creating some really big wins. The Re-Spins were so rare they didn’t feel like a part of the game. If I hadn’t seen them listed in the paytable I wouldn’t have known they were a part of the slot at all.

Players that enjoy normal video slots without too many features but modern graphics and animations will get what they’re looking for. The slot has a max. win of 2,250x your bet which is quite high for Elk Studios but there are other developers that offer more.

Browse casinos with Wild Toro and other slots from Elk. Create an account and try the game for free before making a deposit.

You can play Wild Toro in English, Finnish, Swedish, German and 19 other languages. 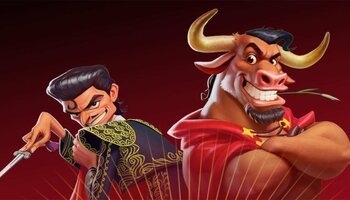