The tribe of Wild Turkeys has gathered to celebrate the wild totems. Join the indigenous turkeys and play for big wins.

Wild Turkey is a NetEnt classic from 2013. It was basically an instant hit that resonated well with the crowd. It is a very simple game, but has high volatility and thus, high payouts.

The simplistic nature is one of the big things that drew people to this slot. It is easy to learn, it’s fast-paced and with luck, you can win a lot of money from it. Wild Turkey was for the longest time one of the most played NetEnt slots. It can still be found in many casino’s most popular games lists.

I know I have played my share of this game. Back in the day, I did get a few bigger wins from the free spin feature, which is why I still hold this slot in high regard to this day. I know that this is not something that will happen to everyone, but I just wanted to lay it out there.

So join the turkeys for some light-hearted fun and try it out yourself. See if the turkeys are your friend or foe.

NetEnt is a developer with a distinguishable style. You can always tell that a game, especially around when Wild Turkey came out, is made by NetEnt. The slots are always clean, easy to understand and polished.

The theme here is a society of turkeys that live in an undisclosed mountainous region. They have advanced far enough to build huts, craft tools and weapons, and even build totems that they worship.

The visuals are built around the theme. Everything is hand-carved from wood and stone. It all looks like the turkeys themselves could have built the game.

The sounds of the slot are a bit underwhelming. There is some very quiet drumming going on in the background, which is hard to even hear. The sound effects are generally fine, but nothing spectacular. The soundscape is made to resemble the stereotypical South-American sound. Pan flutes and wooden drums can be heard while you play.

Like everything else in this game, the outside is simple and well-polished. The game isn’t going to blow your socks off, but nothing about it will annoy you. I personally like how the game looks, but I can’t say that the game wowed me.

Turkeys are funny birds and here we see a whole rafter of them acting out the different roles of the tribe. All the high-paying symbols are turkeys, and they include ones like the chief, the shaman and the guard. For the low-paying symbols, we get the standard card numbers from ten to ace. Even though they are not thematically accurate, they are at least visually pleasing. The numbers and symbols are made of stone.

The pay structure is very top-heavy. The best symbols pay way more than any of the lower-tiered ones. Even among the high-paying turkey symbols, the difference is still massive. It is easy to see the high-volatility of this slot by just looking at the paytable.

This table also tells you why the free spins are so valuable. There are a ton of wilds spinning around during the free spins, so hitting those high-end symbols isn’t that difficult. A single chief turkey symbol can hit multiple paylines with some wilds and that’s a wrap then.

The turkeys worship the wilds and when you get at least three of them anywhere on the reels, you activate the Free Spin feature. The turkeys gather around the fire and celebrate their totems. For three wilds you get 15 spins, for four you receive 30 spins and if you get five wilds, you are awarded 60 free spins.

During the free spins, the wild totems grow to their true size. They are actually three squares tall and can fill an entire reel. If you happen to get a full totem on any reel, you get two extra free spins.

I have always liked Wild Turkey. Ever since the slot was released, I have been playing it. It is one of my go-to games, which I can always pick up and have fun with.

The big reason why I like the slot is that I got some good wins from it very early on. I know the game has high volatility, which means that if you win, you win big, but it is more likely that you won’t. So a big win can easily sway a player’s opinion.

2013 was a big year for NetEnt. A lot of good games were released back then, like Twin Spin, Reel Rush and Secret of the Stones. These slots are considered classics and Wild Turkey is truly worth that title.

Browse casinos with Wild Turkey and other slots from NetEnt. Create an account and try the game for free before making a deposit.

You can play Wild Turkey in English, Finnish, Swedish, German and 20 other languages. 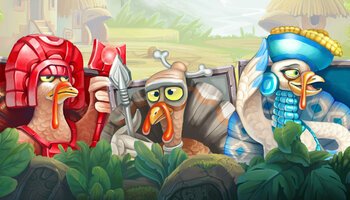