A slot game that has been named “Wild Wheel - Big Money” tells you right away what you can expect in terms of gameplay and potential payouts.

This is one of the lesser-known productions by Push Gaming that I approached with an open mind nevertheless. If the theme doesn’t appear to have much magnetism to it then the set of specs and gameplay details may nudge players towards the game.

Wild Wheel will be interesting to anyone who likes watching television game shows. I couldn’t recognize whether the game mimics any particular show because the symbols are just too generic for the style and the theme, but the execution is decent enough so that you may want to explore more of it.

The maximum win potential of Wild Wheel is 3358x your bet which is quite decent in my opinion, but what I took note of is the theoretical RTP percentage which is 96.98% - quite rare nowadays.

It looks like Push Gaming has paid more attention to detail to the math model than the graphics. I have no complaints in that regard because Wild Wheel comes with a medium to high variance model that interacts with the game’s extra features quite handsomely.

I could witness the Wild Wheel feature a number of times. The potential for a big payout is there thanks to it, but it isn’t the only thing that can spice up the base game. If you hadn’t already guessed, it is the wild symbol that’s been primed to do most of the magic on the three rows and five reels. I played the game longer than I anticipated and overall the impressions that I have are positive.

The high-paying symbols on the reels are piggy banks, coffers filled with raw cash, gold bullions, golden safes and a few other symbols that relate to wealth and money. As I was playing the game I wished that Push Gaming had given the graphic design a second thought before opting for this design style. The game could have been a class higher had the symbols been more realistic and less cartoon-like.

But despite this, the game is dynamic and there is some animation around the symbol payouts, but nothing too intricate. The only symbol that can bring real flare to the reels is the wild. This is also the most anticipated symbol of the game because it is linked to the extra features, so you will get to notice what it does.

Unlike the lukewarm graphic design, I liked the sound quite a bit. You’ll hear a recurring that’s been produced well and sits somewhere between lounge and smooth jazz - just the number for a popular television game show, so if you decide to play Wild Wheel, you can leave the music on.

I didn’t get the opportunity to spin the pink wheel but I did get a taste of the locked reels that are the default feature in the free spins bonus. Regardless of the number of free spins and the level at which the bonus had triggered, the three reels in the middle are locked and turn up the same set of symbols with each spin.

I set out to play Wild Wheel without looking at the paytable first. I wanted to see if the game is going to surprise me with its payout structure. It didn't and for that matter that was quite within my expectations.

The main feature is what you'd really be playing for. In my experience with Wild Wheel, the payouts during the base game were mostly composed of the low-paying royal cards, however, the wild symbol is never missing in action.

The lows can pay between 0.10x and 1.50x your bet. Some of the wins that I got were made for five matching royal cards, but only with the help of expanded wild symbols. You can make more than your bet with these symbols if the winning outcome is spread across multiple paylines.

Winning outcomes for high-paying symbols don't figure prominently but they do crop up, again, with the help of the expanding wild symbols in the middle. You can expect to gain between 0.25x and 7.5x your bet for the middle tier of symbols, while the coffer with cash, the pink piggy bank and the golden safe pay can between 1x and 30x your bet.

Wild Wheel is a fitting choice for those who can be easily entertained by television game shows (here is one!). The game doesn’t abound in extra features but the Wild Wheel duly compensates for that. This is where things can explode, but only if the math model likes you during your play so that it treats you to the second level of the bonus wheel. I was fortunate to spin the green wheel only twice and I can say that I am pretty satisfied with both outcomes.

The only thing that had me annoyed was the dearth of a third wild reel. It looks like you need to play more than 100 spins in order to get to the bonus. Can it be worth it? 1500x your bet is a great prospect, so potentially, yes.

Browse casinos with Wild Wheel and other slots from Push Gaming. Create an account and try the game for free before making a deposit.

You can play Wild Wheel in English, Finnish, Swedish, German and 16 other languages. 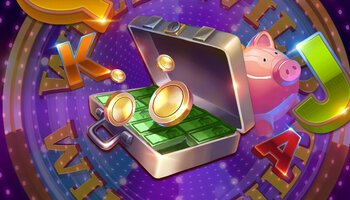