Willy is a fan of chillies and his slot is burning hot. Dare to sink your teeth into these wild multiplying chillies?

NetEnt released Willy’s Hot Chillies in the summer of 2020. As the name implies, it is a Mexican-themed slot and the chillies are the centre of attention.

The game is a great example of NetEnt’s surefire quality. Everything runs exactly the way it should and playing it is easy. Personally, I wouldn’t even mind if every other developer stole NetEnt’s mechanical design because it’s just that good.

This is a very focused game that doesn’t do more than it needs to. The slot revolves around the special chillies and that’s about it. They are wild, they are stacked, they have multipliers and they help Willy start his special feature, Willy’s Hot Wheel. The slot doesn’t need anything else. Well, maybe a glass of milk to ease the burn.

Willy’s Hot Chillies is a cartoony game that has a strong Mexican theme. The visual design reminds me a bit of Spiñata Grande, Lucha Maniacs and Taco Brothers, which all share the same general theme.

Willy’s Hot Chillies doesn’t take itself too seriously and has a comical feel to it. The game went with a stereotypical look, which might not be that great. It’s so caricaturistic that it might even be seen as offensive. Willy is a sombrero-wearing, chilli-loving character and the symbols include a tequila bottle, tacos and piñatas.

What is good about the design, is that it is clean and colourful. You can easily tell each symbol apart even with a quick glance. You can immediately tell if you are getting a winning combination because you aren’t getting these symbols mixed up.

The Mexican theme can also be heard. The music suits the game and the sound effects remind me of Esqueleto Explosivo, but with less singing. A solid performance, just as you would expect from NetEnt.

The reels are full of Mexican-themed symbols and a whole bunch of chillies. There are eight regular symbols, the wild chillies and Willy himself. Willy will activate the special feature if there are enough chillies visible, but he shows up very rarely.

The hottest thing in this game are the chillies. They are wilds and they each have a multiplier on them. The wilds are stacked and there are a lot of them. It is easy to hit these wilds and multiply your wins.

We all love multipliers but here they come with a catch. Every win is minuscule if you don’t have a multiplier. Only the best symbol is worth your bet if you have three of them and the low-tier symbols can never cover your wager. The multipliers here aren’t a nice bonus, they are a mandatory thing.

This is the biggest issue I have with the game. The pay structure doesn’t feel balanced. The Willy’s Hot Wheel bonus game is great, but it is very hard to activate. This means that you have to rely on the wilds to keep your bankroll up. Without them, you will end up constantly losing money.

Multiplier Wilds: Hot chillies will fry your wins to a new level

The best part is that every wild has a multiplier attached to it. They are all between 2x and 5x, and if you get multiple wilds on the same payline, the multipliers are added together.

If Willy shows up on reel 1 and you have at least one stack of chillies on the reels, you activate the bonus game. The stacked wilds will light up and all the multipliers on them are your spins on Willy’s Hot Wheel.

The wheel is located above the reels and the flaming stacks are where you win. There are empty spaces and three types of symbols on the wheel. If you get a number, that is a cash prize. You can also get extra spins or even set a new reel on fire. All the chillies that show up are always collected and will increase the multiplier for all future wins.

NetEnt is an amazing developer and they can make a great game with little effort. So it was fairly safe to assume that Willy’s Hot Chillies was going to be a tasty slot. My assumption wasn’t off, even though this game isn’t exactly my favourite dish.

When it comes to the technical stuff, everything works like a charm. The game runs smoothly and looks nice. I just found the balance to be a bit off. The wins and volatility were clashing.

The game also has one small thing that bugged me a lot. I often play with the autoplay on and want the game to stop when a bonus feature or free spins are activated, so I can pay full attention to it. Here, you can set the game to stop on Willy’s Hot Wheel feature, but it stops after it’s over.

What makes this a bit more annoying, is the fact how rarely I was able to activate the feature. There are a lot of wilds, but Willy doesn’t want to show up often.

In the end, it’s still a good slot. It looks nice, it’s easy to play and it has an innovative feature. It just felt a bit too spicy for my taste.

Browse casinos with Willy's Hot Chillies and other slots from NetEnt. Create an account and try the game for free before making a deposit.

You can play Willy's Hot Chillies in English, Finnish, Swedish, German and 20 other languages. 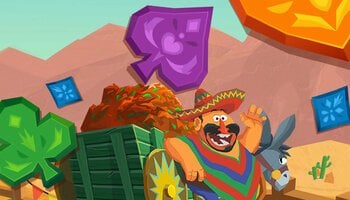