Win & Replay is a classical three-reel slot by Wazdan that can shake out a few pleasant surprises with the help of the extra feature.

On the surface the game appears as ordinary as a lamppost, but getting one or more wilds in the right positions can certainly inspire a fun-loving adventure on the reels, towards a maximum win potential of 500x.

This 3-reel and five-payline game comes with the usual Wazdan accoutrements, except the option to change the volatility, which I think has been taken out precisely because of the wild and the potential payouts it begets.

Win & Replay is a classic slot machine that brings more of the same that can be found on any given game in that category.

Personally, I find the symbols uninspiring because they are a bunch of BARs, Xs, and sevens in various iterations (singles, doubles and triples).

Wazdan's designers had taken care to insert some moving parts, lights and similarly subtle eye candy around the reel-set, to balance out the dull appearance of the symbols.

The game can give you a jolt that comes with the winning outcomes, especially when there is the wild involved. This is the element that improves the overall impression and makes the graphics more palatable.

This three-reeler doesn't come with any bonus features, but it does have a wild symbol that can work some wondrous magic for the winning outcomes, and there is a multiplier on the winnings when the reels are filled with the same symbol kind.

The paytable has the wild symbol and seven symbols that pay for three of a kind across the five fixed paylines. The bets range between 10p and £100.00 per spin.

The X symbol returns the money you'd stake, at 1x the bet. The single BAR pays double, the double BAR 4x, and the triple BAR 8x.

Symbols that you don't see too often are the blue and red sevens. The black seven pays 14x, the double seven (blue) pays 20x and the triple pays the highest prize of 50x your bet.

Thankfully, there is another possibility for a winning outcome. Players can get double the win amount if the reel-set shows nine matching symbols. To illustrate, getting nine blue sevens equals 40x your bet.

These outcomes are possible but rare. I’ve played Win & Replay several times and never got anything above the triple BAR symbol across the entire reel-set.

This game barely makes it in my book. Even small wins are sparse, so playing means playing the patience game.

There can be only one lucky break from any of the outcomes, and that is with getting a wild and several win iterations with it. In the event, each respin pays the initial outcome with the wild again, plus any new sets of matching symbols that post on the available paylines.

The maximum exposure on Win & Replay is 500x and the only way getting near it is with the help of the wild respins.

Browse casinos with Win & Replay and other slots from Wazdan. Create an account and try the game for free before making a deposit.

You can play Win & Replay in English, German, French, Spanish and 6 other languages. 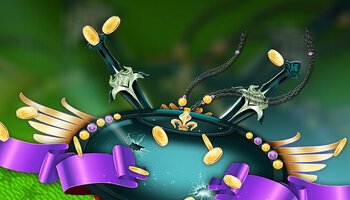