Welcome to Windy City. Welcome to this 5-reel, 3-row slot with 10 paylines taking place bang on in the middle of America’s prohibition era. The style of the game even gives a nod to the iconic Chicago musical. It has all the glitz and glamour you would expect but also some of the danger surrounding the gangsters and the alcohol ban in 1920’s America.

The visual elements of this slot perfectly mirror the Windy City feel. And the story behind it is an interesting one. Thumbs up to Endorphina for putting so much work into a backstory! There’s a love triangle going on here and the people involved are dangerous ones.

Stylistically, the slot looks gorgeous. The same goes for the music and FX used. The higher-paying tiles are nicely designed and also carry an interesting animation when a win is registered. The lower-paying symbols are on the plain side, but all in all the whole design works well together.

Get the three scatter symbols on reels 1, 3 and 5 and you will kickstart the bonus round. It is a very straightforward one and very similar to the base game. The only difference is that in the bonus round the scatter tile also doubles as a wild card. This means there is more of a chance to get some higher wins than you would normally in the base game.

As with every Endorphina slot, with every win, you are given the option to gamble your money. Some of their risk games are very on-brand with the game and offer another dimension to the slot. This isn’t one of them which is quite disappointing considered they could have played it nicely within the theme.

The risk game involves the usual 1 card-side-up and 4 cards-side-down game. Choose a card that is higher than the one shown and your money is doubled. It has an average return to player of 84% but this all depends on the kind of card you are dealt facing up. Most often than not I picked the wrong card. Chances aren’t even at 25% a card as they are instances where all of the cards are lower than the dealer’s card meaning you have no chance at winning the round.

This game follows the usual Endorphina slot recipe which makes it a little on the boring side. Even though stylistically, this slot is gorgeous to look at, I found myself unentertained. You do find yourself getting a few 5-of-a-kind during gameplay since there are relatively few tiles in play. But this just isn’t enough to get my pulse racing.

Even when a bonus round is triggered - and to be fair this happened quite a few times - the game still lacked excitement. Not to mention that the wins from the 3 bonus rounds I entered stood at 13x, 11x and 6x. Frankly, I had better wins on a single spin in the base game.

So, once again Endorphina managed to create a good looking game. But, as with some of their other titles, the lack of features and boring gameplay let this slot down.

Browse casinos with Windy City and other slots from Endorphina. Create an account and try the game for free before making a deposit.

You can play Windy City in English 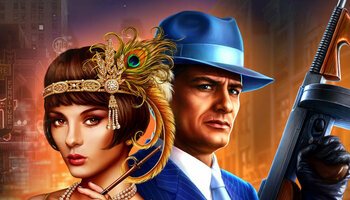