Wings of Ra delves into one of the most popular themes for online slots, Ancient Egypt, and turns it into a colourful but static game. Players can enjoy a basic gameplay experience with only a few features such as free spins and adjacent wins.

This slot was developed by Red Tiger who released it at the start of 2020 to give players their Ancient Egypt fill. The game dives headfirst into the setting, making use of all the expected symbols and graphics. The 5-reel, 3-row playing field offers enough room to show off the details of the various symbols but even then the low-paying symbols are generic card letters. I should note that the designers put some effort into making these fit the theme but they still don’t make sense.

The game has 10 paylines that count both ways, resulting in a win from left to right and vice versa. Getting a win will highlight the affected symbols but only a few of them actually have animations. The background of the slot only shows some pillars, making it seem like we’re simply looking at a wall inside some Egyptian building.

As the theme of the game would hint at, there is little creativity when it comes to the sound-design either. I did appreciate they kept the generic Middle-Eastern music to a minimum and gave it ebbs and flows, where it would alternate between sounding only softly in the background and being more prominently present.

All of the symbols in Wings of Ra players will probably already have seen dozens of times. Red Tiger earns no points when it comes to the creativity on display here, as all of them are simply lifted from the Egyptian culture and implanted into the slot. The only things that don’t belong are the card letters, even though they are slightly dolled up to not look completely out of place.

Unlike as you might expect, the game has Medium Volatility. The game isn’t exactly forthcoming with wins but they do occur occasionally and when they pop up, they usually grant wins that are big enough to make back a number of wins. The fact that it counts wins from both sides helps a lot, making any 3 symbols in a row likely to be a win.

If players aren’t entirely comfortable with the volatility they can choose to increase or decrease their bets per spin, making it either more or less risky. Keeping an eye on their funds is necessary either way! Players can pick a bet between £0.10 and £20 per bet. Considering its volatility, the max. win of 3,166x your bet is actually quite good, even though I never felt I was getting close to it.

Wings of Ra has a few features. While some of them are easy enough to understand, I had to take my time looking through the paytable to understand some of the others. I think that’s never a great sign, especially considering the rest of the game stays on the surface so much.

First a quick overview of the features:

The base game only revolves around the adjacent wins mechanic, creating organic wins whenever at least 3 of the same symbol appears on a win line anywhere on the screen. This happened frequently enough but the payouts are low and it would often only create a single win, making it hardly ever worth the time.

Free Spins could be activated by getting 3 Free Spins symbols on the screen. This only happened occasionally and not often enough for my liking. Having it activate would usually be quite beneficial but would not create the big wins needed to make back my spent funds. Obviously, this can be different for other players.

The biggest feature during the free spins were the Mystery Coins. High-paying symbols turn over to reveal Mystery Coins. Each Coin fills a progress bar at the top of the screen a little bit. Once the progress bar is filled, the lowest current symbol, starting with 10, also becomes a Mystery Coin with every spin.

After the Mystery Coin has spun to fill the progress bar, it fills again to reveal a random symbol. All Coins reveal the same symbol which means that helps create a win. As the progress bar is filled repeatedly more and more symbols will turn into Coins and thus increase the possibility of getting a big win.

Wings of Ra is not going to be a slot that many people will remember in a few months time. The theme is too popular and the ideas implemented in this game are too generic to have it stand out in any meaningful way. Not that the graphics are bad, they are just extremely uninspired and will not help players recall this game.

The slot is perfect for those that only enjoy slots where there are barely any features and the base game is both the biggest part of the game and has the fewest distractions. When someone does hit the free spins mode they might be overwhelmed by what happens next, but it can usually result in some interesting wins. I found the game to be pretty lenient in handing out the Mystery Coins.

I will probably not remember this slot in a few months, having faded into the almost endless pile of Egypt-based games. I understand this is a quick and easy setting to base a slot into, but the risk is what Wings of Ra suffers from, it becomes completely indistinguishable from all other similar games in existence.

Play Wings of Ra for free

Browse casinos with Wings of Ra and other slots from Red Tiger. Create an account and try the game for free before making a deposit.

You can play Wings of Ra in English, Finnish, Swedish, German and 18 other languages. 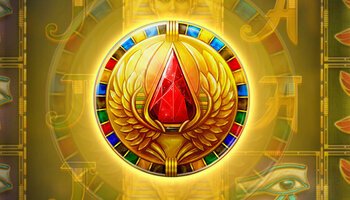