Wings of Riches is a game about nature itself creating big wins. The flowers themselves help us as replicating wilds and don’t forget about the multipliers!

Set in a lush green garden, Wing of Riches places us in the tiny boots of mythical fairies as we spin on the 5-reel, 3-row playing field with its 20 paylines. The game looks great with the different symbols animated when part of a win, as well as a great looking background that has a lot of deep green.

The game was developed by NetEnt and released in 2019, making it a very pleasant gameplay experience as it uses all the features we’ve come to expect over the years. The game reminded me of Enchanted Meadow and Enchanted Crystals, both by Play ‘n GO, as these also used the idea of miniature fairies as the basis for the slot.

I found the game looking great while the music was suitably calm and light. I particularly liked the extra sound effects that enforced the idea we were in a garden. There was the sound of singing birds and the occasional cricket in the distance. Other than that, the music stayed in the background.

Wings of Riches has completely original symbols helping in maintaining the illusion of its theme. The high-paying symbols are fairies and animals while the low-paying symbols are different kinds of flowers. With the use of distinct colours, it nonetheless stays clear.

The symbols are, unfortunately, only lightly animated but there is enough movement happening to keep things interesting for the eye. When compared to other NetEnt slots, I did feel like it was lagging behind a bit.

There aren’t a lot of features to discuss when talking about Wings of Riches, which prefers to keep things simple. Still, I’ll go over them quickly.

As you can see, there’s not a lot of options and not a lot of features. I did find them to work well together. Especially the Random Wilds were welcome. Every time a Wild appeared it would spawn another 2 to 4 other Wilds on the playing field. Sometimes more than 1 Wild would appear, which in turn would mean an additional 2 to 4 Wilds each!

Since this happens every spin during the free spins mode plus the multiplier, it meant that the free spins mode was the portion of the game where I had a shot at the big wins. However, since the Wilds were pretty common during the base game it did help in getting bigger wins then too. Although the game has a listed Low Volatility, I wouldn’t say that the wins I got were always small.

I rather enjoyed the game even with its comparatively small number of features. The game weaves them together in a way that they enforce each other, making the free spins mode an exclamation mark and not an oasis in a barren desert.

Even though Wings of Riches doesn’t do anything new, it offers a nice familiar game experience for people that enjoy this. The graphics are sharp and beautiful, animated to the point they liven up the reels enough to make it feel like we’re really in a garden. The characters unfortunately only play a small role, acting as high-paying symbols but not as part of the free spins mode.

Players have an opportunity to pick a bet between £0.20 and £400 per spin. Even with low volatility, the maximum bet was quite steep for me so I opted for something a lot lower. That resulted in me keeping my funds relatively stable. The max. win of 2,500x your bet is acceptable and higher than other NetEnt slots.

If you’re a player that enjoys high quality but simple slots, Wings of Riches is an excellent choice. Players that prefer something more or less modern might want to find something else.

Play Wings of Riches for free

Browse casinos with Wings of Riches and other slots from NetEnt. Create an account and try the game for free before making a deposit.

You can play Wings of Riches in English, Finnish, Swedish, German and 20 other languages. 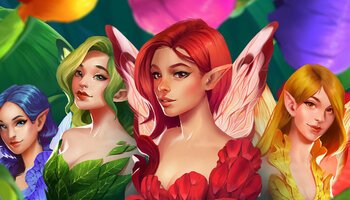