Wins of Fortune turns the story of the Monkey King into a fast-paced, almost modern setting where players are treated to a non-standard playing field, walking re-spins and expanding reels.

When Quickspin developed and released Wins of Fortune in 2017, it seems they were in the mood to shake things up. They combined a set of amazing graphics with a non-standard playing field that also expands as wins progress. This leaves us with a 5-reel slot, where the first 2 reels are 3 tiles, the next 2 are 4 tiles and the last one is 5 tiles high. At the start, the game has 76 paylines but this can expand to 259 paylines.

The game is set somewhere in China, as depicted by the Chinese temple in the background, standing next to a lake. The drawing is quite beautiful if a bit static, and it gets obscured more and more as the reels grow. Still, I found it to be a good way to set the mood. The symbols are either coloured gems or different characters. Because of the size of the slot, the tiles aren’t very big but I thought they still showed enough detail.

The game looks very modern and it took me a while to realise that it’s set in ancient China. The characters look like action figures, the Wilds are written in a modern font and the music also sounds very modern. I think it’s a nice approach to the theme though since the Monkey King is a popular setting but almost always done the same way.

The game has a limited number of different symbols but enough to make it difficult to get a win. Because of the expanding reels feature and the possibility of big wins, a single payline only pays out a little. These factors all result in the game having High Volatility.

Even though there aren’t a lot of different symbols I thought that it was odd that some of the gems use different colours of green. Especially the Azure and Teal gems look a lot alike, which sometimes made it confusing on the eye. Considering the reels spin quickly and expand it can get a little unclear. Luckily any wins light up the tiles and dim the others, which help in making the win lines more obvious.

The game has a number of features that impact the game in significant ways but there are no bonus games or free spins. The focus of the game is completely on the playing field and how it changes as the slot progresses.

As mentioned before, the game starts with 5 reels that are of different lengths. Reels 1 and 2 are 3 tiles high, reels 3 and 4 are 4 tiles high and reel 5 is 5 tiles high. As the game plays and the player gets several wins in a row, the shorter reels are replaced with 5-tile reels. After 5 wins the entire playing field is made up out of 5-tile reels.

This didn’t happen to me a lot, but it wasn’t exactly rare either. It meant that the game had awarded me a series of wins in a row. The high volatility in the game is dependent on this since the payouts are extremely low. Even the highest-paying symbol won’t make back your bet with a three-of-a-kind win. The game expects you to either get multiple wins at the same time or a series of them in a row.

Because of this mechanic, the game also doesn’t trigger new spins all the time. Whenever there’s a win and the playing field expands, it’s a re-spin that doesn’t cost coins. This helps with making back the initial bet.

If the playing field is at its maximum size, the last win will trigger a sticky re-spin where the symbols involved stick to the screen and the rest spins again. If additional symbols are added to the win the re-spins continue for as long as they do. Once they stop, the game resets to the normal screen.

This wasn’t very common since it required a lot of wins and even then it could immediately end, but it had the possibility of turning into a big win and one the game depends on a lot.

Wins of Fortune is a modern-looking game with a historic setting. The design of the game is colourful and energetic without it actually applying to the theme. The music enforces this, creating something interesting and in my opinion, unique.

The changing playing field adds a new twist to the re-spin feature, which will be a boon for players that like modern developments in their slots. The classic player might have the opposite reaction, thinking it is a bit too much of a departure from the normal slot machine.

If you’re a player that enjoys a challenge, I would recommend Wins of Fortune. The high volatility makes it rather risky, which can be mitigated by picking a bet between £0.20 and £100 that fits their style. The max. win of 2,757x your bet is actually rather impressive but also a requirement to make this game interesting for big stake players.

During my time playing, even with a low bet, I noticed that my funds were steadily declining. Don’t expect to even out, you will likely either win big or lose steadily.

Play Wins of Fortune for free

Browse casinos with Wins of Fortune and other slots from Quickspin. Create an account and try the game for free before making a deposit.

You can play Wins of Fortune in English, Finnish, Swedish, German and 23 other languages. 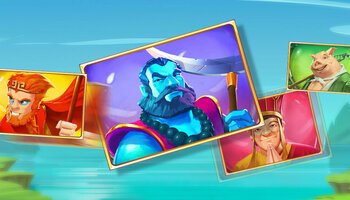