Witchcraft Academy is a special place for adventurous wizards and witches that are looking to explore the mysterious castle and find the source of its power.

Developed by NetEnt and released in 2018, Witchcraft Academy looks to increase the level at which we judge slots yet again. Where other slots are often content in delivering a rather standard experience, Witchcraft Academy pushes the limits of what we’ve seen before. NetEnt quite literally tried to add some magic to its slot!

Obviously, Witchcraft Academy isn’t the first game to draw inspiration from a series like Harry Potter. What to think of Sweet Alchemy by Play ‘n GO that follows a witch trying to concoct a special potion. Meanwhile, Yggdrasil’s Beauty and the Beast settles for the fairytale route but still finds itself in a magical castle.

This slot operates on the surface like a normal slot with a 5-reel, 4-row playing field and 20 paylines. An interesting deviation from the norm is that the paylines pay both ways, from left to right and right to left.

As I’ve come to expect from NetEnt the game looks absolutely gorgeous. The symbols are all animated when part of a win while the low-paying symbols even have some movement when they simply drop down. The background shows us a magical library with floating books and a curious ghost trying to help us.

The music during the base game is very toned down and subtle, as well as the winning sounds. It adds to the mystique of the slot and the setting, amplifying the idea that the two main characters are sneaking into the library and secretly doing their investigating.

The symbols in the game are all hand-drawn and I thought they fit the theme of the game well. The low-paying symbols are based on card suits but made to look like potions. It took me a minute to realise they were supposed to be based on card suits, that’s how well they are integrated into the setting!

When you get a winning payline the game makes it a point to show you which paylines they are as well as showing a quick pop-up that gives you the total coin value. If you get a big win, the game pauses and gives a special splash screen with the two main characters.

Although Witchcraft Academy doesn’t have the same crazy number of features that some other NetEnt slots have, it still has a sizeable amount. First, I’ll go over them quickly:

I found it very refreshing to see that any combination of 3 symbols on a winning payline count. This can go left to right, vice versa but also apply to symbols on reel 2, 3 and 4. It means that the paylines always count and you don’t need to have it start from either reel 1 or 5.

The Bonus Game called Elements Mode triggered quite frequently, sending the main characters Earthan and Efora down into the hidden caves below the library. Here they are presented with something that looks like a chessboard. With their Element powers, they can clear the board. The board has 5 rows and 5 columns. On the rearmost column, there is either a multiplier or a free spins symbol. Clearing a row completely will unlock that bonus. Getting 3 out of 5 bonuses starts the Free Spins mode.

I didn’t get to unlock the Free Spins mode often but the Elements Mode can already be pretty lucrative. If you do manage to get the Free Spins, you’ll find yourself and your heroes going even deeper into the caves below the castle.

Here, the game will grant you the number of free spins you unlocked. Reel 1 or 5 can be filled with Sticky Wilds depending on your unlocks. During the free spins mode, additional Scatter Symbols can add more Free Spins.

I found the Free Spins mode to be less original than the Elements Mode and also a little less impressive visually but it had the biggest potential to be a big payoff. It’s too bad it didn’t trigger too often, but with regular Elements Modes, it makes it more likely it will eventually hit.

The game looks and plays very well and I enjoyed it thoroughly. The setting is magical and the symbols are all colourful and set in the theme. The small details and animations that pop up everywhere are a lot of fun to look out for, especially since there are 3 different backgrounds as you play.

Where other games might go overboard with features or keep it very basic, I think Witchcraft Academy did a good job finding the middle road. The Elements Mode is the biggest departure from a traditional slot but it’s easy enough to figure out. Getting the Free Spins mode is a little harder than in other games but the extras you can unlock make it very lucrative.

The fact the paylines go both ways means that the Medium Volatility lives up to itself. I saw semi-regular wins that were generally pretty high. Players have the ability to choose a bet between £0.20 and £200 per spin and though I’d personally advise keeping your bets reasonably low, with a maximum bet the max. win of 800x your bet would be more impressive. Just be aware that with its medium volatility it might happen that you’ll deplete your funds before you hit a win!

I liked Witchcraft Academy even though I’m usually not that big a fan of the cute magical style. It simply looks and plays too well to say anything negative about it. It’s also a perfect mix between the modern feature-heavy slots and the classic games. I’d say there’s something here for everyone to enjoy.

Browse casinos with Witchcraft Academy and other slots from NetEnt. Create an account and try the game for free before making a deposit.

You can play Witchcraft Academy in English, Finnish, Swedish, German and 20 other languages. 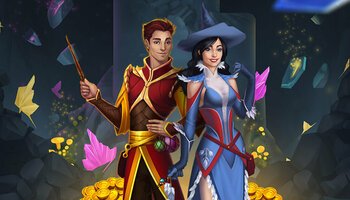