What do you do when a collection of gems looks like candy that you can't eat but really want to? You crush them, turn them into dust, gain win multipliers and play for a chance to win cash prizes of up to 25,000x your bet.

There is a dwarf wizard that can make something like this possible and his name is the Wizard of Gems. This is a Play'n GO game that was released in 2015. That is three years since the epic arcade game Candy Crush Saga appeared on millions of screens around the world, so I can't say that there isn't any semblance.

But this game is on a whole new level and not only because it is an online slot. Play'n GO succeeded in having me mesmerized by the visual manifestation of radiant colours and an engaging engine. This is a game where players can land cascading wins for a chance to stretch the bet as much as the randomness of the math model can allow.

Wizard of Gems comes with 20 paylines and a fitting layout of three rows and five reels. I really liked the time when good games were given a basic layout. This is one of those games that I enjoyed playing many times over.

I guess the wizard made me do it, but I found it to be time and money well-spent because of all of the above plus the free spins bonus and a paytable that is quite decent.

Those who decide to give the Wizard of Gems a try will find themselves teleported into a fairytale realm where the main attraction is a set of erratic gems.

Play'n GO has created a perfect background to match the mood of the gameplay. The castle and the enchanting wood that grows crystals are the part that doesn't move.

Well, perhaps it doesn't move but it is positively trippy, but everything else about the game is a crazy carnival of lights and sound and a funky wizard that is making it all happen.

The soundtrack is just as fascinating. It sounds like a synthesizer folk melody has been passed through a Nordic epic metal ballad, with a guitar riff and a matching beat.

I am sure it takes a huge pile of working hours and energy to produce something like Wizard of Gems, but the result is obvious - a top-notch online slot that makes the experience a memorable story.

The paytable speaks of a balanced payout structure insomuch that the values of the symbol payouts are split right down the middle. Across the board, we have all seven symbols paying less than your bet for winning outcomes consisting of three of a kind. The outcome that pays 1x your bet is with four orange gems and this symbol is the least valuable in the high-paying category.

High-pays for the low-paying gems start with five matching symbols. The blue, sky-blue, purple and green gems pay between 2x and 3.75x in that respect and the orange, pink and red gems pay between 6.25x and 25x your bet. At any rate, the win multipliers can transform the small payouts into decent winning outcomes, but it takes at least two cascades in order to see figures that are more exciting than those at the bottom row on the paytable.

Medium variance and RTP of 96% are exactly what the game feels like. The base game will churn out smaller payouts that should help your balance last until the bonus feature. In-between you may get few consecutive cascades and make a decent win from that.

I’ve played Wizard of Gems a dozen times and always found it charming and I think most players will feel about it the same way.

Play Wizard of Gems for free

Browse casinos with Wizard of Gems and other slots from Play'n GO. Create an account and try the game for free before making a deposit.

You can play Wizard of Gems in English, Finnish, Swedish, German and 30 other languages. 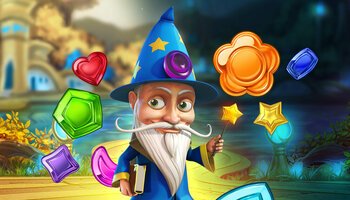