Dust off your favourite grimoire and try casting a magical spell that makes the reels of the Wizard Shop come back with a bang. It only took me a few spins to get into the game and a few minutes to get a load of the pretty graphics. In my opinion, this is an underrated Push Gaming production and I hope that my modest wizardry is going to shed some light on the game's potential.

Players are going to find a layout of five reels and six rows, which is pretty uncommon in the world of online slots, which gives me an even better reason for having played the game a number of times. That and the 50 paylines makes for interesting gameplay with a medium to high variance math model.

In other words, what appears to be a cute Wizard Shop is also an ivory tower owned by a master alchemist who can replicate his mirror-image in multiple locations for a chance to trigger bigger payouts. I like this feature because you never know how many wizards can post on the reels, but it isn't the only feature and that makes the game more amusing.

In addition to the extra features, the other key detail that grabbed my attention was the theoretical return to player (RTP) which is a whole, round 97% - another rarity that can make Wizard Shop stand apart from the plethora of slots with a layout of 3x5.

The title says it all. The game takes the 'magic' and 'wizard' theme and runs with it to create an immersive gaming experience. Part of the gameplay is a coin-collecting feature that enables the player to shop around for boosters during the free spins bonus. That adds the interactive element which most slot games are missing and it looks pretty on the screen, as the game is taking place inside a wizard’s shop.

I have played few similarly-themed slots, especially iSoftBet's Merlin series, and I am impressed with the graphics of this particular game. I can't precisely say why. Perhaps it's the way they've drawn and coloured-in the wizard, maybe it's the dynamic visual effects that come with a number of events on the reels, but my overall impression is that the Wizard Shop is pretty unique.

As you play the game you can't avoid noticing the sound score which is paired with a fitting melody. Close-calls, winning outcomes and bonus events unleash a flurry of sound effects that are spot-on with the game's dynamic. If I have to compare this game to other Push Gaming productions, I can safely say it stands on its own.

Push Gaming has several games that have their twin siblings, such as Tiki Tumble and Blaze of Ra and Power Force Heroes and Power Force Villains, but this game is fully unique in many respects - unique graphics, unique math model and an RTP that is definitely higher than your average slot.

I mentioned at the start that Wizard Shop is interactive and quite successful at that. The gold coins can come along with any of the standard symbols and over time they will accumulate, so when you are at the shop you can mix and match the boosters that you’d like to have during your free spins rounds.

In terms of the symbols' values, the wilds are definitely king. Both in the base game and bonus feature, players can land at least two wilds and gain a payout.

A notable detail about the paytable structure is that there are three symbol tiers with three kinds of symbols in each. As I expected, neither of these returns your bet for three matching symbols on a payline. That makes sense, as there are 50 paylines and multiple chances to land crisscrossing payouts along these.

The low and medium-paying symbols can pay between 0.2x and 0.6x for three of a kind, 0.4x and 1.6x for four of a kind and 1x and 5x your bet for wins consisting of five matching symbols. The hourglass, the grimoire and the wizard's symbols pay between 0.20x and 8x your bet.

Wizard Shop was released in 2017 and plays like a slot that'd be released in 2020. The range of wagers is between £0.25 and £100.00 and there are all of the accoutrements of a solid game, including autoplay option and turbo mode in the settings menu.

I've enjoyed the gameplay and I think it's one of the better games out there that's outside the 3x5 frame and pays across paylines instead of 'ways to win'.

I think the main reason why I stayed with the game comes down to the variance level. Medium to high plays across this layout and the set of feature that can materialize on it quite well.

Had the variance level been set too high only, the payouts would have been slimmer and medium-sized wins less frequent. But the opposite is at work here and I think that's worth exploring.

Browse casinos with Wizard Shop and other slots from Push Gaming. Create an account and try the game for free before making a deposit.

You can play Wizard Shop in English, Finnish, Swedish, German and 16 other languages. 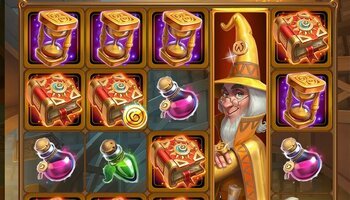