Wolf Cub takes place deep inside a wintery forest where a young wolf and his animal companions learn about survival, friendship and some massive wins!

The game is set during the winter where a young wolf cub is sitting in a snow-covered forest. The background looks suitably dark and dreary while the cub is almost ridiculously cute. I personally don’t really like the art-style but it undeniably looks adorable. Especially the little wolf has a lot of personality.

The game was developed by NetEnt and released in 2017. Even as a modern slot it stays close to the classic layout of a 5-reel, 3-row playing field with a matching 20 paylines. The reels are filled with both animal portraits and card suit symbols. Although they all are made to look fitting with the theme, I found the card suit symbols to be quite out of character.

Both cute animals and winter are popular topics for slots. One of the cutest animals might be the Chibeasties by Yggdrasil and their sequel Chibeasties 2. Meanwhile, Play ‘n GO has explored winter by focusing on the holidays in the appropriately named Holiday Season slot. If you’re looking for something similar to Wolf Cub, I don’t think you can really go wrong with these two games!

Wolf Cub felt like a moderate effort slot coming from NetEnt. It has quite a lot of detail, some beautiful art, a fitting soundtrack but it never excels at anything. Where slots like Wild Worlds or Asgardian Stones make my jaw drop at how amazing it looks, this game falls into the tier below that. Still great, still comparable to the best that other developers have to offer but not the best at what NetEnt can do when they put their mind to it.

The slot has symbols divided into two broad categories: high-paying character symbols and low-paying card suits. The card suits are made to look like they’re carved from wood and although that fits the wintery forest theme, I don’t think wolf cubs spend a lot of time carving symbols out of wood either. Surely there must have been some compromise there?

Considering the game’s listed Medium Volatility the number of symbols made sense. Not so many as to make winning impossible but enough to keep the number of wins spaced out.

The character symbols are animated when they’re part of a winning payline but don’t do anything too extravagant. The most you’ll see moving is the wolf cub sitting to the side of the reels, roaring or yawning as the game plays.

The game features are rather standard but they still add an additional dimension to the gameplay.

In short, the main features are:

I can’t say too much about the base game that’s not already obvious to anyone who has played a slot before. Stacked symbols appear occasionally but do not serve any special purpose during the base game. It’s only in the free spins mode that they are part of the so-called Blizzard Feature.

The Blizzard Feature didn’t appear too often, in fact, there were many Free Spins modes where I didn’t see it appear at all. Nonetheless, when it did appear, it would often result in quite substantial wins. Of course, considering the nature of slots it’s also possible not to get anything out of it.

The Free Spins mode itself is pretty basic when it comes to special features but it popped up often enough to keep it interesting. Before the Free Spins mode, a special Free Spins symbol is added. These have a number on them, which added up becomes the number of free spins you get to play with. I saw it add up to quite a lot and theoretically, it’s possible to get more than 100 free spins this way. Obviously, that would be exceedingly rare.

Wolf Cub is something I consider a staple NetEnt slot. Like I mentioned before it doesn’t really go out of its way to do anything new or spectacular. Instead, it delivers a very solid experience for people who enjoy modern, well-designed classic slots. The features included in the game do very little to mess with the basic gameplay but add enough of a twist to keep it interesting.

I can’t say anything bad about the art or the sound. Although I personally prefer my art style a little different, I can’t say it looks bad. In fact, it reminded me of older children’s books that many people probably grew up with. The imagery and backgrounds all did a good job at setting the mood and it never breaks away from that mood either.

The game has a max. win of 2,000x your bet which isn’t bad when we take its volatility in consideration. Especially since NetEnt tends to keep their maximum wins pretty low compared to other developers. You can choose a bet between £0.20 and £200 per spin, however, which can pump up the numbers you win by quite a lot.

I enjoyed Wolf Cub even though it’s not as extravagant as for example Finn and the Swirly Spin or Witchcraft Academy, but I think that suits a lot of people perfectly fine. If you’re looking for a solid, enjoyable classic slot with some modern features thrown in and a lot of heart, you should give Wolf Cub a spin.

Browse casinos with Wolf Cub and other slots from NetEnt. Create an account and try the game for free before making a deposit.

You can play Wolf Cub in English, Finnish, Swedish, German and 20 other languages. 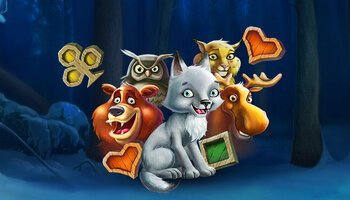