Wolf Gold is a slot that is set in the American prairie where there is a wide variety of wildlife running around. The slot also includes features such as wilds, re-spins and free spins that would give players a sense of excitement and adventure.

The game was developed by Pragmatic Play and released in 2017. Even though it’s slowly starting to get older, the game does feature some nice graphics. I wouldn’t call them very original but they do look nice enough to set the mood. They are all hand-drawn as well which helps keep them appearing fresh and sharp, unlike 3D graphics used in older slots. The game has a 5-reel, 3-row playing field it uses to show off the symbols.

In total, the game has 25 paylines on which to get a win. Whenever you manage to get a win it will light up the winning tiles. The high-paying symbols also come with a brief animation, which I found to be a nice touch. Speaking of the symbols, these are divided between high-paying symbols depicting different animals you can find on the prairie, and low-paying symbols that are based on simple card letters.

There is enough colour in the slot to keep the eye interested. I didn’t get a good view of the background as the playing field takes up most of the screen. What is visible shows off the famous rocks you can find in Death Valley and similar areas. The overall tone of the game is also the yellow-brown tint that fits the setting very well.

Wolf Gold is a game that makes use of a selection of animals to depict the high-paying symbols. These are drawn specifically for the game. Whenever there’s a win, the tiles light up and the total coin value is shown. Even though these animations aren’t intricate they do help the game stand apart from other slots.

The game has a listed Medium Volatility which is a result of the decent payouts, the average number of paylines and the features that will grant the occasional larger win. I found the slot to grant me some wins relatively often even though they wouldn’t be very high most of the time. Players are expected to play for quite a while in order to have a shot at the big wins.

Speaking of big wins, the slot offers a max. win of 2,500x your bet which is about normal for a game with this volatility. Players that want to adjust their bets can do that by picking a bet between £0.25 and £125 per spin. As always, I recommend starting off low and increasing as you see fit or you run the risk of running out of funds before you hit a big win.

The game features a number of symbols, including:

Wolf Gold should have given you an idea of what kind of slot it wants to be based on its symbols and setting. There is no real innovation to be found here, and I would consider this game to be middle-of-the-road. That’s not a bad thing, but it does mean that it will mostly appeal to players who are looking for that classic slot experience.

To drive this point home, let’s take a quick look at the features:

I don’t think most of these features need much explanation. I didn’t think the Wild symbol was very common to see and because of that, its effect was minimal. The free spins mode activates like it normally does. I did like that it included a Colossal symbol, making it easier to get a win. To balance this out though, the player only receives five free spins.

The re-spins feature is the most appealing part of the slot, even though it proved quite difficult to trigger during my time playing. There are full moon symbols that appear randomly during the base game. If there are 6 or more, it triggers the re-spins mode. During this mode, all other symbols disappear and only the full moons remain.

Each symbol has a coin value on it. Once the re-spins run out, these values are added together and awarded to the player. This was often the biggest win I would see while playing this game.

Wolf Gold isn’t really setting out to explore uncharted lands. The graphics are good but look familiar and have been done before in other slots. The animations do help to create some movement but it all still remains rather obvious.

The gameplay is very close to the standard and will most likely be instantly understood by everyone but the newest players. If you are looking for a slot that will let you play a game without having to worry about experimental features, this game will likely fit the bill.

The jackpots are nice but not progressive. They do feel appealingly close, being tied to the re-spin feature. If you manage to fill the entire screen with full moons, you will walk away with a hefty sum. It won’t be as much as the maximum win but it will still make your week!

Browse casinos with Wolf Gold™ and other slots from Pragmatic Play. Create an account and try the game for free before making a deposit.

You can play Wolf Gold™ in English, Finnish, Swedish, German and 17 other languages. 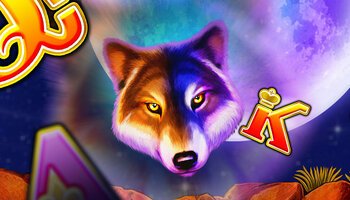