Wolf Moon Rising is a slot that draws inspiration from the myths of werewolves and brings the player to a snow-covered forest where they are confronted with these mythical animals. The game also features free spins, wilds and multipliers.

This game was developed by Betsoft and released back in 2019, which makes it relatively new. The graphics look rather old-fashioned, drawn in this strange style that was very popular in the ’90s and frequently showed up on the side of trucks in America. It’s not badly done art, I just don’t find it very appealing. The 5-reel, 3-row playing field does give enough room to show off the symbols.

The background is a painting of a dark forest somewhere in a rural area, with snow-capped mountains in the distance. There are no animations to bring it to life at all, making it all seem rather static. The reels don’t offer much movement either, even when there’s a win on one of the 25 win lines. The low-paying symbols are unfortunately simple card letters that are drawn in a bland font and with bright colours which ruin the theme.

The symbols in Wolf Moon Rising are clear and large, making it easy to distinguish and to see whenever a win is created. However, the art is simply not very appealing and the card letters use such bright colours that they completely break the immersion a player might have had.

There are the following symbols in the game:

The payouts are actually quite high, even when taking the shortest three-of-a-kind win. Getting one with the 9 symbol will award the player 1x their bet, meaning they get their last spin back. I found that often the player will get longer wins or multiple wins, which means the funds stay up a little better.

Still, the game has Medium Volatility which means there can be quite some time between wins. Players might end up losing a lot of their funds before they can make back some coins at which point it might be too late. It is possible to pick a bet between £0.25 and £5 which is actually a very small range. The max. win of 20,196x your bet does make up for that somewhat but considering the low bet amounts this won’t be as much as the jackpot in other slots can be.

Wolf Moon Rising keeps things relatively simple when it comes to its features, bringing only a few standard mechanics into play. Most players will already be familiar with them and I don’t think people will need to dive into the paytable to figure it out.

These features can be found in the slot:

None of these features really behave any differently than you’d expect. Players will mostly be faced with Wilds as the base game is where they’ll spend most of their time. The Wilds are pretty helpful in creating wins and they also count as a win on their own, which is a nice extra.

Free Spins are very rare even though getting at least 3 Bonus symbols on the screen also guarantees a win on top of that. In my experience, the Free Spins mode is the best time to get a big win, with the 2x multiplier offering just enough of an edge to make things interesting. However, the base game and the free spins mode play exactly the same.

Wolf Moon Rising is a newer slot with outdated graphics. The images are sharp but reminded me of the type of graffiti found on trucks and cars two decades ago. I’m not sure if that was what the creators were going for but it instantly dated the game for me.

The features are also not very remarkable, but they are popular for a reason. They offer enough diversity for the gameplay to stay interesting and players are likely to have some advantage from activating them.

If you’re looking for a modern slot than this will likely not be for you. People who find the art appealing or who enjoy a simple slot with some basic features will have a much better time playing this game. It is very easy to get into and might even reward players with some extra funds.

Browse casinos with Wolf Moon Rising and other slots from Betsoft. Create an account and try the game for free before making a deposit.

You can play Wolf Moon Rising in English, Finnish, Swedish, German and 22 other languages. 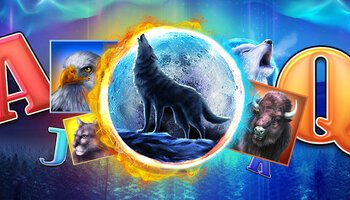