Play Wonders of the Ancient World

You can visit ancient Babylon, the Pyramids at Giza, the Parthenon and touch Zeus’ golden statue at Olympia all in the same breath. While you are visiting the magnificent ancient wonders, you may also chance upon cash prizes of up to 10,000x your bet from a single turn of the reels.

The game at hand is called Wonders of the Ancient World and comes with three rows and five reels, but unlike most of Tom Horn's productions from around the same period, players can land winning outcomes on 15 paylines and trigger two bonus features.

I didn't find the game’s graphics particularly engaging but it isn't a complete disaster either. If I have to describe it in two words those would be "light-hearted" because the theme is quite neutral and painfully motionless too.

So why did I ever bother playing Wonders of the Ancient World? I'd say it's because of the low volatility and the paytable structure. In this regard, I think that the game has a unique potential because there are several symbols that can pay amounts that are more than decent.

As the name suggests, Wonders of the Ancient World is about the megastructures that date from BC times. These are the game's high-paying symbols that barely succeed in grasping the dramatic appearance of those buildings. The symbols are not three-dimensional and I don’t think the designers could have done much in terms of animation around buildings, towers and statues.

Nevertheless, I don’t remember seeing or hearing about any other games that have put into motion the Hanging Gardens of Babylon, the Parthenon of Athens, the Temple of Artemis, the Colossus at Rhodes, the Lighthouse of Alexandria and so on. Because of this, I consider the game to be somewhat unique, however, players who are looking for a full-blown video slot aren’t going to find Wonders of the Ancient World as thrilling as any of the games that have been made in 2020.

This is one of those games that you can play not only for the bonus features. The base game is good enough in terms of prizes that you can land appetizing wins even for three matching symbols. As I said earlier, I think it's strange that it didn't take so many spins between either of the bonuses to trigger, but then you have to remind yourself that this is a low variance game so it’s natural for the winning outcomes to match that volatility level, more or less.

Another fun part for me was considering the paytable structure. It doesn't take a lot of scrutinizing to realize that Ton Horn has shrouded a seriously benign paytable behind a lacklustre graphic design.

In addition to the wild's and the bonus symbols' payouts, there are few other symbols that can arrange for a pleasant surprise, that is if the random number generator doles out four or five matching symbols on a payline.

Yeah, the game really makes it worth seeing the temple at Ephesus or the hanging gardens at Babylon because these symbols can pay 100x and 200x for four of a kind and 500x and 1,000x your payline bet for five of a kind, respectively.

The cards' symbols have the following range:

All of the above makes Wonders of the Ancient World a game that I don't mind playing despite getting plenty of wins for two and three matching symbols. These can prop up your balance so it doesn't sink way below your initial deposit and that's all towards the possibility of landing a big win either during the bonus features or by getting some five symbol wins.

I think that most of the games that I've played and enjoyed had better graphic design than Wonders of the Ancient World, but as I said, the symbols aren't an eyesore, they are just, well, not very entertaining.

My bottom line is, the game isn't going to hold your attention for too long so if you can overcome the snooze you may get to see some of the world's ancient architectural marvels convert your bets into a decent cash prize.

Play Wonders of the Ancient World for free

Browse casinos with Wonders of the Ancient World and other slots from Tom Horn Gaming. Create an account and try the game for free before making a deposit.

You can play Wonders of the Ancient World in English, Finnish, Swedish, German and 22 other languages. 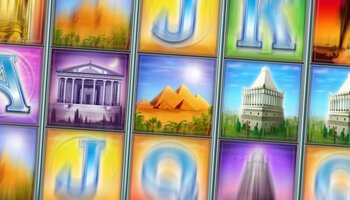