Wonky Wabbits are eating up everything and leaving wilds behind. Hop on in and fill your reels with nothing but wilds.

Wonky Wabbits was released in 2014 and is a part of NetEnt’s large expansion to the mobile market. Games released at this point were the first ones to get a mobile version and a browser version simultaneously.

Wonky Wabbits is a fairly traditional online slot. It has five reels, three rows and only one special symbol. This game has no special modes or anything fancy, but it is surprisingly fun to play. Those special symbols, those are the fun part.

The game is a high volatility slot. This means that the big wins are big, but the small ones are really small. You can get a wild symbol on all the spaces of every reel or barely get your wager back. This is an “all or nothing” type of a game.

Wonky Wabbits is a charming game with a unique look when it comes to slots. Everything is made of fabric and even the symbols are stitched patches.

This visual style has been seen in video games before and after Wonky Wabbits. Kirby’s Epic Yarn was one of the first ones to utilize the idea of a world made of fabric. Yoshi’s Woolly World later took this idea even further by having everything made of yarn. Paper-based worlds have also been popular.

When it comes to Wonky Wabbits, everything here looks unified. The whole world feels connected and nothing here is loose. Good stitching, I’d say.

The only weakness is the audio. The theme music is very muted and feels like nothing. With a visual style as unique as this, they could have gone with much better music. Something quirky and cartoony would have been great. I just found the entire game audio to be forgetful. It wasn’t annoying, but I couldn’t remember any of it after I stopped playing.

All the symbols in Wonky Wabbits are embroidered patches. Rather fitting when your vegetable patch is full of vegetables patches. Carrots, tomatoes, corn, broccoli and aubergines fill the reels alongside tens, jacks, queens, kings and aces.

The game has only one special symbol and that is the wild. In this game, the wilds are really wild, as they duplicate. This means that it is possible to fill most of the screen with nothing but wilds. Even getting all 15 squares filled isn’t that hard to do.

Getting good wins with the wilds is made easier by the fact that you can get wins both ways. So it doesn’t matter if all the wilds show up in the right or the left side, you get a win no matter how they line up.

You could say that Wonky Wabbits is an unbalanced game. The high volatility is a big factor here. You can get major wins with the wilds, but that comes at the cost of getting low wins without them. The normal wins in the base game are not worth much.

You need to ask yourself what do you like. Are the big wins important to you, if you need to go through 20 spins of basically nothing before you get to one? If you like high volatility, then you need to check this game out.

I like the concept of this game. It is well executed and it’s fun to play. The patchwork visuals look nice even if the audio doesn’t complement it enough. Wonky Wabbits is a wild game, and this is where the problem lies for me.

I’m not that big a fan of high volatility games. I would prefer to see better base game wins, but that is just my preference. I do love the duplicating wilds. As soon as I see a wild show up on the reels, I start to look where would the optimal spot for the duplicate be. If I had some control over them, I would absolutely love this game.

As it is now, this game is still a classic. A moment of pure enjoyment without any real strategy or planning.

Browse casinos with Wonky Wabbits and other slots from NetEnt. Create an account and try the game for free before making a deposit.

You can play Wonky Wabbits in English, Finnish, Swedish, German and 20 other languages. 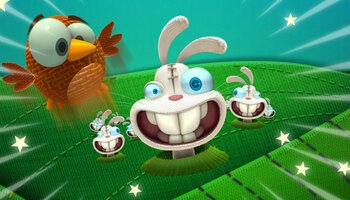