Wunderfest Deluxe is the updated version of Wunderfest, set during the popular Oktoberfest with beautiful women, lots of food and of course endless supplies of beer!

Developed by Booming Games and released in 2018, Wunderfest Deluxe is the much-improved version of the original that was released in 2017. With new graphics and better animations, the game looks a lot closer to what I’ve come to expect from the big-name developers they’re competing with.

Although most of the symbols aren’t different from the original Wunderfest, they have been updated to look better and sharper. The 5-reel, 3-row playing field gives more room to the different images. Meanwhile, the game also has 25 paylines now instead of the 10 that the original had. This means it’s more likely to get a win, causing the volatility to drop down to Low Volatility.

The soundtrack has also been updated, having some extra detail to it and sounding a lot more festive. Having the soundtrack on helped in setting the mood and it definitely put a smile on my face even though I’ve never been to a real Oktoberfest.

The symbols in Wunderfest Deluxe are a lot bigger and more detailed than those in the original. There is a nice extra when you get Stacked Symbols, where each of the characters has a special version of itself that fills the entire reel. I thought that it looked very good and along with the added animation, it added extra atmosphere as well.

All the symbols look crisp and detailed, staying very easily distinguishable from each other to quickly tell if you’re close to a win. When there is a win the first reel shows the total value of that win, while the winning symbols light up and the rest of the playing field becomes darker.

The features in Wunderfest Deluxe are basically the same ones as the ones found in Wunderfest itself. They’re not very original but they did help in livening the game up during my time playing.

The most interesting and visually appealing feature is the Stacked Symbols feature. Whenever a reel is filled with the same high-paying symbol it will transform into a special 1x3 symbol. A nice addition to this feature is that it is the only time it will count a vertical payline. In other words: the Stacked Symbols will be counted from top to bottom as a winning payline!

What’s more is that a vertical win, thanks to Stacked Symbols, will count as a 3x multiplier. That means it can quickly turn into a big win since I’ve regularly had 2 or more reels be filled with Stacked Symbols at a time. I don’t think Booming Games has used this special addition to the feature before and it instantly made it a lot more beneficial.

The Free Spins mode is in contrast unfortunately not as beneficial. It has no special rules or modifiers that only activate during this part of the game, making it equally as likely or unlikely to get a win as the base game. The only real advantage is obviously the free spins themselves, but I regularly had free spins rounds with very low returns. In short, it’s not a guarantee for any big wins.

Wunderfest Deluxe is definitely an improvement over Wunderfest when it comes to the features however, thanks to the small tweaks made to the Stacked Symbols. They instantly make them a lot better and it was actually exciting to see them pop up.

Where a lot of updated editions of existing slots by other developers can be simple re-skins, Wunderfest Deluxe does go a little above and beyond to really create a better version of the original slot. The features are largely the same but the small updates made to the gameplay not only rejuvenate it enough to make it stand apart, but it also adds to the enjoyment of playing the game.

The graphics and sound show a higher level of skill and competence, making me think that Booming Games is slowly working their way up the ranks of video slot developers towards being more than just a generic slot creator. It’s a matter of time to see if this trend continues.

Finally, players can choose a bet between £0.25 and £500 per spin. Even with low volatility, betting too high can have disastrous results so I would advise caution. A max. win of 430x your bet is a low number which also doesn’t encourage taking big risks.

Browse casinos with Wunderfest Deluxe and other slots from Booming Games. Create an account and try the game for free before making a deposit.

You can play Wunderfest Deluxe in English, Finnish, Swedish, German and 23 other languages. 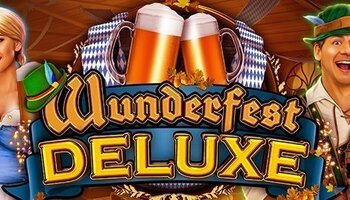