Wunderfest is one possible name for the popular festival better known as Oktoberfest, part of German culture which involves endless quantities of beer and perhaps some big wins!

This slot was created by Booming Games and released in 2017, set around the famous festival that started in Germany but is now known across the world. Wunderfest has a standard 5-reel, 3-row playing field with 10 paylines, giving players a shot at turning a party into something lucrative. Meanwhile, the game takes place in the middle of Oktoberfest, where we find ourselves surrounded by people, snacks and of course lots of beer!

When it comes to the look of the slot I found it to do a good job of creating the illusion of an actual party. The background is a simple cobble street but all the symbols in the game are original and look good. The symbols aren’t animated a lot but do show some movement when part of a winning payline. Wilds are animated, filling up with beer when they’re part of a win.

The music is what you’d expect from a game set in Germany, mostly based around the accordion. When there is a bigger win the music is enhanced by a short tune by a small band. I thought it was a fun detail but the sound loop was rather short and after a while it got repetitive.

Each of the symbols in Wunderfest is original and distinct, keeping with the theme of the slot and enhancing the setting. The high-paying symbols are different types of characters while the low-paying symbols are mostly food and elements you could find at an Oktoberfest party. Booming Games seems to enjoy adding busty ladies to their games as they did with Golden Girls and Valley of Pharaohs. It’s not over the top though and it fits the dress-code of Oktoberfest!

With its Medium Volatility, I found the payouts for the symbols to be appropriate. The higher symbols especially have a rather high amount associated with them, which helped me keep my funds relatively stable.

Wunderfest doesn’t have too many original features but the selection it does have works well together. Booming Games has a list of features that are included in almost all of their slots with only a few exceptions.

During my time playing, the Free Spins mode activated quite often. There were times where they were activated back-to-back with almost no normal spins in between. It’s not possible to re-trigger extra free spins during the Free Spins mode itself. Because of the Expanding Symbols feature, this mode can turn out to be very lucrative.

The base game isn’t especially interesting or beneficial for any big wins. There was a steady supply of wins though, and I did see my funds go up occasionally. In general, you want to get into the Free Spins mode for the bigger wins.

There’s not much to say about the game that isn’t already familiar to anyone who has played a Booming Games slot before. There is nothing wrong with the gameplay if you like a classic slot experience but you won’t be blown away by innovation. I had a good enough time with Wunderfest but it won’t be a something I’ll come back to.

Wunderfest fits comfortably in the standard Booming Games library with its collection of features and acceptable graphics. The developers did a good job at staying close to the theme they picked for this slot, helping the player stay in the mood.

Players that enjoy these types of games will get a good if forgettable time out of this slot. The possibility to pick a bet between £0.01 and £300 per spin gives players the opportunity to find something they’re comfortable with. Meanwhile, the max. win of 1,011x your bet isn’t very impressive but a nice incentive to keep playing a little longer nonetheless.

If you’ve ever played a Booming Games slot before you already know what’s in store. This is one of the prettier slots in their arsenal but it still does little to differentiate itself from the rest of their games. Players looking for something new and exciting might do better looking elsewhere.

Browse casinos with Wunderfest and other slots from Booming Games. Create an account and try the game for free before making a deposit.

You can play Wunderfest in English, Finnish, Swedish, German and 23 other languages. 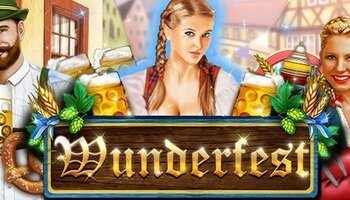