Yak, Yeti and Roll around the snowy land in your snowmobile and seek the treasures inside the ice!

This 2018 slot-release by Betsoft takes us riding a snowmobile, but it’s not just any ordinary thing. It’s being powered by the Abominable Snowman himself, tirelessly pedalling forward along the trail. Travelling with him is a short, bearded Inuit, smiling happily. So, judging from this, these two are good friends.

Did you know that the legend of Yeti goes as far back as 3,000 years? That’s when it was first mentioned in a Chinese encyclopedia. The first modern-world sightings of the Snowman were made in the early 1800s when a British natural scientist met some local hunters in Nepal. They told him about their encounter with a creature, that walked on two legs and was covered in long hair.

Since those days, the Yeti has been a famous character in the world of entertainment. The monstrous thing has starred in numerous movies, cartoons, games… And now slots, too!

I really like how this slot turned out! I haven’t really played that many Betsoft slots before, but after some testing, I’m definitely warming up to them.

Generally, when playing slots from Betsoft, I’ve loved the visuals as well as the music. But I can’t say the same with Yak, Yeti and Roll. The music of this slot is way too simple and way too repetitive for me to listen any more than a minute, or two at max. Luckily the tune gets faded away with spinning the reels, in which case we can hear some wind blowing and lovely jingle bells.

I like how Betsoft has managed to include the theme in the whole game, including the less valuable symbols. Even they look frosty and there’s a thin layer of snow on them. I particularly like the background that gently rolls forward every time the snowmobile makes progress.

Yak, Yeti and Roll is a slot of five reels, three rows and 20 fixed paylines. You can easily adjust your bet with two buttons, and then you’re ready to get spinning. The winning combinations are calculated from left to right, and from adjacent reels, except the Scatter symbol.

The player gets to advance on the snowmobile trail if the newly added symbols create a new winning combination. The winning symbols are then replaced with new ones until there are no more paying combinations.

Below the reels are the first nine steps of the snowmobile trail. The steps have either white, green, golden, red or blue blocks of ice. White ones don’t do anything, but others either give cash wins, cascade multipliers, free spins or free spin multipliers.

The trail has 17 steps and you can check the trail from start to finish in the game’s paytable. There you can see which steps have rewards and what they are. The 17th and last step pays 200x your stake. And let’s not to forget that if you get there, you’ll also have the winnings from the spins, a bunch of multipliers, and 18 free spins in your pocket, too!

If there are no more winning combinations on the reels, the journey ends and the trail resets to its starting point.

The only way to activate free spins in this slot is to advance far enough on the snowmobile trail. As you roll over your first golden ice block, you’ll receive 8 free spins. It’s possible to collect 18 free spins in total from the trail.

You can collect more free spins by reaching the golden ice blocks again on the free spins trail.

By selecting the double-up you can toss a coin for your winnings from the last spin. Before picking heads or tails, you can also decide if you want to risk everything, or just half. If you manage to guess the result correctly, you win. If not, then you lose your stake and the game takes you back to the base game.

If you feel like the snowmobile can’t reach the free spins quickly enough, you can always buy the feature and start free spins on the spot. The price of the free spins depends on how large your wager is.

When buying the feature you instantly get to play 9 free spins with a 4x multiplier.

I really did enjoy playing this slot! It’s fun, it’s got nice features and the possibility of winning big feels almost tactile. Even if I didn’t get to celebrate any big wins, I still found myself wanting to play a while longer. The snowmobile trail is always visible, so it’s always there to remind you that you’re thiiiiis close to getting better payouts and free spins!

Naturally, I also tried buying the feature couple of times. Based on these test runs it was easy to see that Betsoft has weighed the value for the feature right. It’s expensive enough, getting you thinking twice before buying it, but comparing to the current bet there is, of course, always the chance of player walking out as a winner.

I like my games fast, but from time to time Yak, Yeti and Roll felt almost sluggish. To me, it looked as though the animation of dropping symbols was a bit too heavy. I did turn on the Turbo play (it’s not a turbo play per se, but rather just a quick spin), but on many spins even it couldn’t speed the reels enough. I’d suspect this has something to do with the optimization?

I think Betsoft did a heck of a good job with Yak, Yeti and Roll if looking past the poor optimization and occasional lagging. The theme is fun and the features are very engaging, so it’s genuinely fun to play this slot. I didn’t win anything worth mentioning, but this game definitely has some nice potential.

To see how far you’ll get on the snowmobile the only way is to ride it. Mush, Yeti, mush!

Browse casinos with Yak Yeti & Roll and other slots from Betsoft. Create an account and try the game for free before making a deposit.

You can play Yak Yeti & Roll in English, Finnish, Swedish, German and 22 other languages. 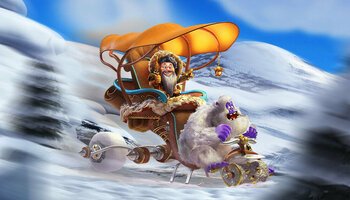