Yeti: Battle of Greenhat Peak sounds like the title of an epic fantasy about humans vs yetis. This game is far from being that. In fact, it's the cutest video slot you'll see in a while.

How do you battle a Yeti exactly? Do you feed it carrots, cherries and watermelons? All with the hope of kindling its good spirits in a game that can add up to three Wild and Sticky Wild symbols on a whim?

If you're to ask me, this partially describes what this Thunderkick game is all about.

With its 3x5 layout and non-standard 11 paylines, the game reminds of a fruit slot that's been given three exciting extra features.

A free spins bonus with the option of adding extra spins can liven things up even more in this high-altitude affair of low volatility.

In this view, Yeti: Battle of Greenhat Peak doesn't have a huge max win potential. With only 845x your bet, the game can make frequent but measured payouts.

Yeti: Battle of Greenhat Peak has a theme that is light and cheerful. Both of the characters were drawn in a cartoon-like quality, yet I still found the gameplay stimulating and well-worth my time.

Perhaps the background appears to be a bit stiff but all of the high-paying symbols are animated and interact well with the theme.

As a matter of fact, I think Thunderkick's designers gave this game their utmost because the attention to detail is perfect.

I was also pleasantly surprised by the immersive soundtrack. Top to bottom and from the perspective of game design, this was a lot of fun to play.

Mr Greenhat, who represents the Wild symbol and a Sticky Wild during the free spins bonus.

Both iterations perform the same function - substituting for all but the bonus symbol.

Mr Greenhat gets super-jolly when two carrot symbols land on the screen.

In the event, the game places between one and three Wilds on random positions plus a respin.

Additional bonus symbols that land during the free rounds add 2+ free spins to the tally, for a maximum of 31 spins.

Wild symbols that come into play become Sticky Wilds until a winning outcome.

I especially like the fact that there is no limit to the number of sticky Wilds.

Non-winning spins during the bonus feature keep the Wild symbols in place. This way, the game can convert multiple positions into Sticky Wilds.

As far as I can tell, this is the only way to getting close to the maximum win potential, with the help of high-paying symbols landing in the right places and winning extra free spins.

In terms of payouts and for the greater part of the paytable, the payout structure does reflect the game's low variance model. In my experience with Yeti: Battle of Greenhat Peak, the base game can turn up many low-valued payouts, but with the help of the Wilds, the fruit symbols can pay at least 1x your bet.

Two exceptions are the two highest-paying symbols (Wild and Yeti), whose values are quite appetizing and strikingly higher compared to the rest of the paytable. I never got five of a kind on a payline, but I do often see three or four Yeti symbols. With the help of the Sticky Wilds, these iterations can turn up some decent payouts.

Symbol payouts are as follows:

I enjoyed playing this Thunderkick game. It’s been a while since they’ve created something this light and outside the realm of real battles and mythological beasts (i.e. “Beat the Beast” series).

The game mechanic of payline wins is standard and I think that the frequency and size of payouts do indeed reflect a low volatility engine.

On the other hand, the payout potential of 845x your bet removes some of the excitement, knowing that this amount was the highest possible win in a test environment.

That said, if you are looking for a similar theme that can shake out super big wins, you’re better off heading for the peaks of 9K Yeti, a highly volatile, edgier game by 4thePlayer.

Browse casinos with Yeti Battle of Greenhat Peak and other slots from Thunderkick. Create an account and try the game for free before making a deposit.

You can play Yeti Battle of Greenhat Peak in English, Finnish, Swedish, Norwegian 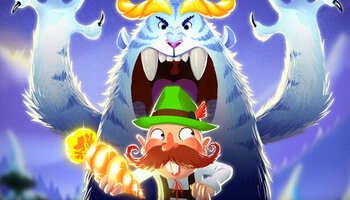