Yokozuna Clash is based around the traditional Japanese sport of Sumo Wrestling. Step into the ring as one of the fighters and fight your opponents using Multipliers, Random Wilds and Free Spins.

Created and released by Yggdrasil in 2019, Yokozuna Clash is a brand-new slot that features some of the most impressive graphics I’ve seen in a video slot so far. Yggdrasil has built a reputation of creating some amazing looking slots and they keep up that reputation with this slot. The 5-reel, 3-row playing field hovers above an actual playing field where we see your character fight a variety of other wrestlers.

The game has an impressive 243 ways to win while also using the Pays Both Ways mechanic. Even so, it has a High Volatility since it did turn out that getting a win line was rather tricky. The symbols in the game are animated but the low-paying symbols are simple card suits and don’t do much. The high-paying symbols are stylised versions of animals who roar or screech which I thought looked great.

I found the sound design to have the same high quality but the music felt a little off. During the base game, it was mostly playing in the background with it being more obvious during the bonus game. The intensity of it also varied depending on any wins. The mix of something a little more modern and the classical Japanese sounds was a good choice I think.

There isn’t a huge number of different symbols in the game but the ones that are there are all beautifully designed. The card suits look rather simple but have been given some creative changes to make them fit with the style of the slot. The different animals are the real eye-catchers, looking like cartoon versions of the real or mythical beasts they’re based on.

Whenever there’s a win the symbols light up and play a short animation, and during the bonus game, this will also have an effect on the fight happening below the reels. This all adds to the idea that there is a real Sumo match happening.

The game’s listed high volatility was similar to my experience playing the game, even though wins happened pretty regularly. They were simply not high enough to win back the coins I spent, except when the bonus game triggered. At that point, there would usually be a bigger win that would compensate for the losses from before.

The base game of Yokozuna Clash plays out much like a regular slot with the notable exception that wins can be counted from both sides. Wins are also counted whenever the same symbol appears on consecutive reels from either left to right or vice versa. The card suit symbols, unfortunately, payout extremely little, with even five-of-a-kind on a win line not enough to make back the original bet.

During the normal gameplay, I didn’t really encounter anything too surprising or interesting. The fact wins were counted both ways was nice but since they paid out so little it was never a source for big wins.

The main draw of the game for me was the bonus game. Here, your wrestler fights a number of opponents until facing off against Yokozuna. Defeating him will have you win the tournament. Fighting is done through winning paylines. The ones that win from left to right are counted for you, wins from right to left are counted for your opponent. The goal then is simply to push your opponent off the ring through a series of wins.

No matter who wins the player receives the total coin win but if the opponent wins the bonus game immediately ends. If the player’s character wins, another opponent is brought in. Each fighter has a different modifier to the fight as well.

The player has the following fighters it will randomly choose:

During the final round you always face Yokozuna:

The bonus game is definitely the most interesting and appealing part of the slot, mostly because of the high rewards. It’s the reason the game has a listed High Volatility as this allows the player to get a big win. Add to that, it also looks great and feels like an actual competition which makes it exciting to watch.

Yokozuna Clash is a typical Yggdrasil slot as it looks amazing with a lot of attention to details, with a bunch of well-thought-out features and just a fun experience to enjoy. The features are rather complex and I had to go through the paytable to even see that the different wrestlers offer different bonuses. It’s something I feel could have been communicated better.

The high volatility really showed during the base game, with the bonus game helping it even out rather consistently. It did mean that I never went very far from my starting funds. Players can pick a bet between £0.25 and £125 per spin to give it more or less risk.

The game offers a max. win of 3,449x your bet which is very respectable, especially considering other Yggdrasil slots. The game never felt like it was easy but the bonus game was a good source of coins nonetheless.

Browse casinos with Yokozuna Clash and other slots from Yggdrasil. Create an account and try the game for free before making a deposit.

You can play Yokozuna Clash in English, Finnish, Swedish, German and 18 other languages. 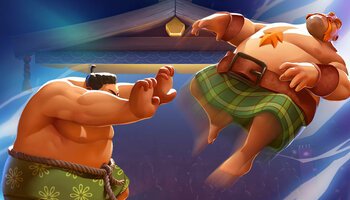