Zeus Lightning Power Reels is a slot that is set in ancient Greek mythology, based around Zeus and his special powers. The massive playing field shows us a variety of symbols, as well as expanding reels, free spins and stacked wilds!

This slot was developed in 2020 by Red Tiger, which has produced a series of interesting slots recently. Zeus Lighting Power Reels also does some things differently but it still remains a rather standard slot in other senses. Its main draw is the massive 7-reel, 6-row playing field with 30 paylines. This field still manages to be big, not giving much space to a background, but instead keeping the symbols big enough to be seen.

Speaking of the symbols, these are all highly detailed and look great. The high-paying symbols are seemingly animal masks, while the low-paying symbols are traditional card suits. I did appreciate the effort that went into designing all the symbols, with even the card suits altered to the point that they fit the theme. Whenever there is a win you can expect a brief animation. Triggering Zeus also has him appear to strike the slot with lightning.

When it comes to the music, the game keeps itself rather muted. There is music playing in the background but it’s soft and not very noticeable. Whenever you get a win it will trigger some standard jingles that didn’t feel very in tune with the setting. Zeus striking the game with lightning did have its own original sound, which did sound good.

Zeus Lightning Power Reels has a large number of different symbols, which is partially the reason why the game has a listed High Volatility. This fits my experience as I played the game since the wins are not terribly frequent and when they do occur they are often only small. Only on occasion are they big enough to make back several spins at once, and even more rarely does the player trigger a big win.

The payouts for bigger wins are quite high but for smaller bet lines are a lot less so, making it more dependent on getting the Stacked Wilds to appear. Zeus Lightning Power Reels lets players pick a bet between £0.10 and £20 per spin, which isn’t a huge range when compared to other slots. The max. win of 5,037x your bet is sizeable but also not the biggest out there.

This slot features a few different ones that augment the basic gameplay, but overall I found this slot to play much like many others. Its larger playing field is a noticeable departure from the standard but even then it gives players enough familiarity to get started quickly. The features included are:

Even though the free spins mode is a big moment when it comes to the potential coin wins, I found that the regular base game was the best time to get any meaningful wins. The Zeus symbol is 1x3 and when it fully appears on the screen, it will add stacked reels to the playing field.

These expanding reels will all be the same random symbol and will count towards a win regardless of their position on the screen. It does not require consecutive reels to trigger a win. It’s also possible that the entire screen is filled with these random stacked symbols, meaning that all bet lines will pay out a win. I found this to happen quite frequently and would occasionally trigger big wins. It does require a high-paying symbol to be selected randomly since the card suits don’t pay out a lot.

The free spins mode was very hard to trigger in my experience, only seeing it activate a handful of times. In general, you are more likely to see the various other features to appear and help in getting wins than to have the free spins be a major factor.

All in all, I thought the features in Zeus Lightning Power Reels to be a fun but rather messy collection. The Zeus symbols in combination with the random symbols work well in creating big wins but are also difficult to explain and it required me to look in the paytable to figure out how it worked exactly.

Zeus Lighting Power Reels once again shows that Red Tiger has recently stepped up their design and have created some very lovely looking slots, with this game as a prime example. There isn’t much animation going on and the background is almost non-existent but the symbols are all big and detailed, fitting the theme well.

The gameplay is something of an oddity. The features themselves aren’t terribly original but they are implemented in a way that I haven’t seen a lot before. Having the bet lines count even when not starting on the first or last reel is a nice change but ultimately not beneficial enough.

As I played I noticed a steady drop of my funds with only an occasional spike. Keep that in mind as you play. If you’re looking for a game that plays a bit more like a standard slot I don’t think this is the right one for you, but people who are feeling experimental might absolutely get a kick out of this.

Browse casinos with Zeus Lightning Power Reels and other slots from Red Tiger. Create an account and try the game for free before making a deposit.

You can play Zeus Lightning Power Reels in English, Finnish, Swedish, German and 18 other languages. 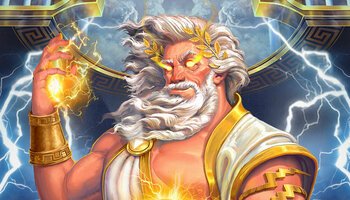