Added to Bojoko by GameArt

GameART is an established gaming software provider launched in 2013, with the aim of creating HTML5 slot games available in various languages.

Based in Malta but with operational units in Italy, the United Kingdom, Slovenia and Service, this game provider has more than 100 game releases under its belt.

The games vary depending on the number of betways, themes, variance, payouts and on the operator’s target demographics.

As a result, the game themes can vary depending on region. The biggest chunk of GameART slot games are available in medium volatility, including popular games, such as Gold of Ra and Tesla Spark of Genius.

Besides creating top games punters can enjoy, this company also makes sure that its casino clients can host their games efficiently and safely within their legal limits. It goes ahead to secure services such as marketing, license handling as well as integration.

GameART has done successfully well in creating games which are compatible across all platforms.

Players can enjoy this supplier’s ever-expanding portfolio of games across all desktop web browsers including Google Chrome, Mozilla Firefox and Opera amongst others.

Despite being a relatively new face on the online gambling scene, the vast majority of the games on offer come with a certain visual quality that rivals that of more well-known and established providers.

Although the games come in a variety of themes, the magic lies between the reels of the slot games – With vibrant colours and highly animated symbols, these games offer much more than aesthetics.

Let’s take online slot More Cash, for example. This five-reel modern video slot is based on the theme of money. The game is embellished with shiny symbols and images of luxury such as high-rise buildings and wads of cash.

Other popular slot games in GameART’s repertoire of games, including Dancing Lions, Treasure Reef and Aztec Empire amongst many others.

GameArt’s game portfolio includes 50+ video slot game titles which are available in various channels such a desktop, tablets and smartphones.

Thre games are available in instant-play mode and created using the latest HTML5 technology to ensure that the games work across numerous platforms.

GameART does not currently offer any live dealer games.

The new Jackpot games are available for 29 GameART games and they are shown worldwide, accessible on desktop and mobile.

GameART has a multipurpose jackpot network whereby casino operators can opt between a variety of three major consumer markets, those being Europe, Asia and LATAM.

GameART owns licences and certifications from the jurisdictions of Curacao, Italy and Romania.

GameART is committed to working with all stakeholders, regulators, operators on current and future legislation pertaining to corporate social responsibility thus ensuring a transparent, and fair gaming experience for the players.

All games are regularly tested by independent third parties and use a Random Number Generator.

GameART game server has the capability to add every currency on the market. The capability abality to have all the currencies makes GameArt games playable to everyone in every corner of the world.

Among all the currencies at the moment GameART has 65 currencies enabled in last year because of the popularity of the cryptocurrencies like Ethereum, Litecoin, Dash, Zcash and others.

GameART games are supported in various languages, including English, Italian and Chinese. 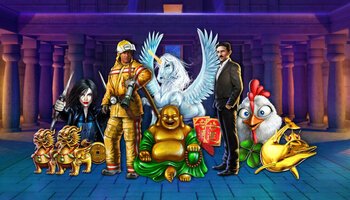