Book of Dead follows the epic journey of adventurer Rich Wilde. This slot from Play'n Go has reached overwhelming popularity and you will find it in most casinos. An enthralling background story, high-quality graphics, and unpredictable gameplay ensure an unforgettable slot experience.

Book of Dead is part of the legendary Rich Wilde series of adventure slots. This very simple but epic game takes you on a quest to hunt treasures. It is well-suited for beginners and yet it will not bore veteran players either.

The overall interface is not complicated at all since it follows a typical 5 reels and 3 rows setting. You can win by forming combinations of 3 or more symbols on any of the 10 paylines. 3 buttons control bets: Coin value, Coins and Lines.

Even though there are many Ancient Egypt slots, there is only one Book of Dead featuring the famous adventurer Rich Wilde. Dating back to 2016, this is one of the originals that every slot player should try at least once.

Play'n Go is well-known for its intriguing graphics and Book of Dead makes no exception to that. The inbuilt special features make it even more exciting and perhaps the most entertaining slot we've ever seen from this provider. 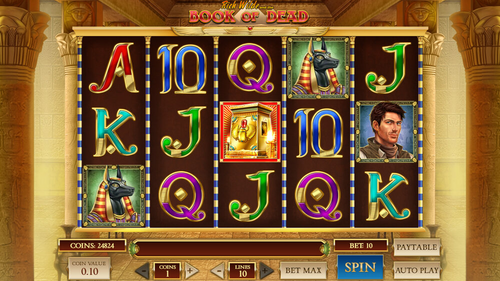 Book of Dead is a relatively simple slot to play and that makes it an excellent choice also for first-time players. There are not tons of symbols and special features to memorise, so it's very easy to follow what's happening.

The reels are set in an ancient burial chamber which adds nicely to the experience. In these mysterious chambers, Rich Wilde is trying to uncover the magical Book of Dead. To get the best out of it, you can turn on the sound and enjoy rhythmic sounds that are triggered by what's going on in the game.

The 11 different symbols consist of:

The number and letters are very traditional slot symbols. They are there to fill the reels and give the lowest payouts.

The gods are there to protect the book and they will do anything to stop Rich Wilde from getting it. They originate from Egyptian mythology and have a higher payout in the game. Horus, the falcon god, and Anubis, the god of death, can offer a maximum win of 750x stake. Osiris, being the god of fertility, the afterlife, the dead, resurrection and life, has a higher value and can bring a maximum win of 2,000x stake.

Rich Wilde is the most rewarding symbol and getting just 2 of them on a payline, will give you back your stake. He also holds the key to unlocking the jackpot, which will bring you 5,000x your stake. 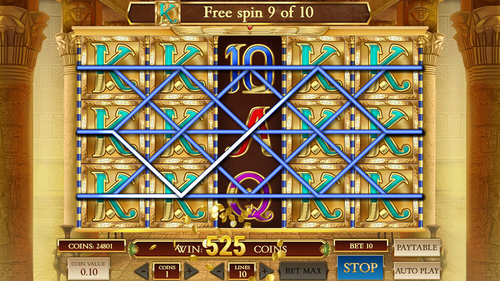 There is one major bonus feature in Book of Dead, which is the free spins. When you get 3 or more Tomb symbols anywhere on the paylines, it will activate the free spins round. You will get a total of 10 free spins and there's something extra to that too. As you enter the sacred chamber where you can play your free spins, another random special expanding symbol will be chosen.

The expanding symbol will extend itself to the entirety of the reel or reels that it's present on. As the excitement builds up with thrilling background music, having Rich Wilde as your expanding symbol can bring you the slot's jackpot which is 5,000x your stake. 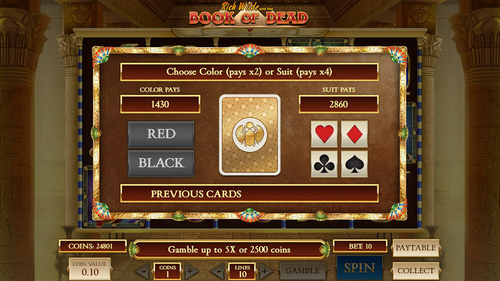 Gamble round is another bonus feature of Book of Dead. It activates in each winning combination and you can enter it to try on adding up to your winnings. In this classic card pack guessing game, you need to choose either the colour or suit of the card which will be turned over. Guessing the colour correctly will double your winnings and guessing the suit is even better – you can quadruple your winnings!

Book of Dead is a stellar example of a slot that offers easy gameplay and lots of excitement without having tons of special elements. Just a few added specials can offer a rewarding game experience and the best part is that you don't have to learn complicated rules.

The adventures of Rich Wilde

Rich Wilde's story began in 2012 when Play'n Go released the first slot starring this devilishly handsome adventurer. Rich Wilde and the Aztec Idols brought the action to the South American jungles where the hunt for treasures began.

Little did we know that Play'n Go had more to add to the series. By 2021, we had seen several exciting slots with Rich Wilde in the main role. There is no doubt that both graphics and rewards have improved with each new release.

The fearless adventurer first introduced his daughter Cat Wilde in the Shield of Athena slot which was released in May 2020. Having a jackpot of 10,000x your stake, it was the biggest win Rich Wilde's family slots had had so far.

Cat Wilde jumped into the main role later in 2020 when Doom of Dead was released. This was quite similar to Book of Dead but both games had their pros and cons which we will examine more closely in the comparison chapter.

Book of Dead has a certain charm that seems to continue to attract fans year after year. Although the game was launched in 2016, it still gathers huge amounts of players every day all over the world.

Among all the Egypt-themed slots, Book of Dead has managed to stay in the top 10 for years already. I don't think there are many players left who have never heard of it. Even if slots weren't your thing at all, it's almost impossible to miss Book of Dead being highlighted in many casinos.

It's difficult to say what lies behind Book of Dead's success. You have to admit that it doesn't have the shine modern slots have. It can't even compete with the high-quality special features and bonuses that some latest titles can bring to the table.

But what it has is exceptionally high-quality graphics, above-average RTP, a gorgeous mobile layout and a simply interesting and catching theme.

Book of dead vs doom of dead 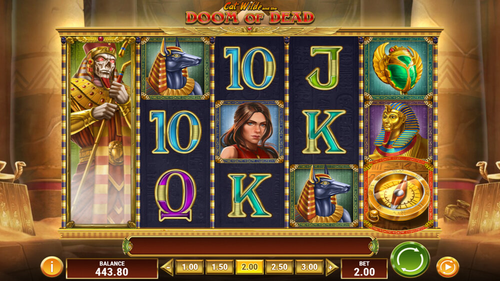 When Book of Dead first saw daylight it quickly raised a lot of interest among slot enthusiasts. Since previous slots in the series had already been successful, expectations were high. By the time Doom of Dead was released, we had already seen many sequels to Rich Wilde's series, and it was time to see what his daughter would bring.

We're looking at two very similar slots here. They are both set in Egypt and the whole layout is very similar. Comparing the main features, it looks as follows:

So which one is better? These are two very similar slots and the only notable difference lies in the number of free spins you can earn inside the game. Doom of Dead is a worthwhile option if you prefer that added feature. But if you like to keep it simple, stick with the good old Book of Dead.

Our verdict: The legend never dies

Book of Dead is arguably one of the legendary slots and it has well earned its place among the stars. It's no wonder that Book of Dead slot sites are so popular and the game still offers entertainment for millions of players every year.

Therefore it's good to remember to play responsibly and arm yourself with plenty of patience. Stick to your budget and take a break from gambling when you reach your limits.

I think Book of Dead is the most fitting game to represent Play'n Go in all its splendour. It might not be the highest rated title from the provider when it comes to gameplay, graphics, bonuses and such, but it definitely is the most popular one. Despite outlasting its predecessors, it has not only surprised us, but also impressed us with its victory over other slots.

I am sure we will see many more Rich Wilde adventures in the future with added special features and even more rewarding treasures to find.

Book of Dead is one of the slot enthusiasts' all-time favourites. It might not have the most modern features, since it was released already back in 2016. But its popularity is above many standard slots and it's a game that everybody should try at least once in their life.

The gameplay in Book of Dead is very simple which makes it a safe first-slot choice also for beginners. The aim is to get winning combinations on the paylines.

There are 5 reels and 3 rows with 10 paylines. You select your stake and start the spins. There is also a special feature and when it gets activated, you will be rewarded with free spins.

Book of Dead works on randomizers and it is impossible to predict what winnings will fall out in each round. It is important to stick to your budget. and play responsibly. Slots should never be considered a source of income and you should only gamble with money that you can afford to lose.

Find casinos with Book of Dead

After working with casino content for a good few years, Milla now puts her heart into writing detailed articles that speak from player to player. She will investigate the smallest details and provide honest reviews.
Read more »