Starburst is a cornerstone game by software provider NetEnt. Since its release back in 2012, the Starburst slot game keeps cropping up in casinos' arsenal of games making it a staple player favourite. Below, you can find all Starburst casinos where you can try the game for yourself, as well as information about all existing Starburst slots. 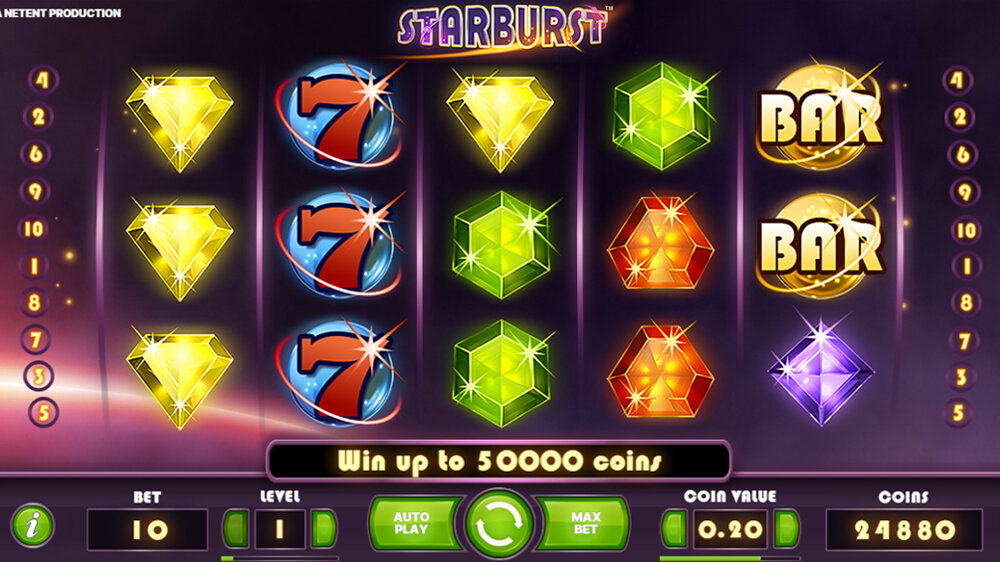 Starburst is a slot game with three rows, five reels, and 10 paylines from left and right. The paylines going left and right means you can win both ways from this space-themed game. It's also a low-volatility game, so you can expect wins to occur more evenly, but there might not be too much variation in size like in more volatile slots. Starburst RTP is 96.09% so it's fairly average.

The gameplay in Starburst is fairly easy to catch on to. You can adjust your bet level between 1 and 10, which changes the number of coins you bet on each spin. The lowest amount is 10, and the highest is 100.

Adjusting coin value defines how valuable each coin is in real money. The lowest possible value is £0.01 per coin, and the highest is £1. In total, you can bet as little as 10p per spin, or as much as £100.

You can find Starburst in almost any online casino out there, so it's easy to try it out. Many online casinos also feature Starburst as the game where players can spin their claimed welcome bonus or free spins. This makes it almost inevitable for you to stumble on Starburst when checking out casino sites. 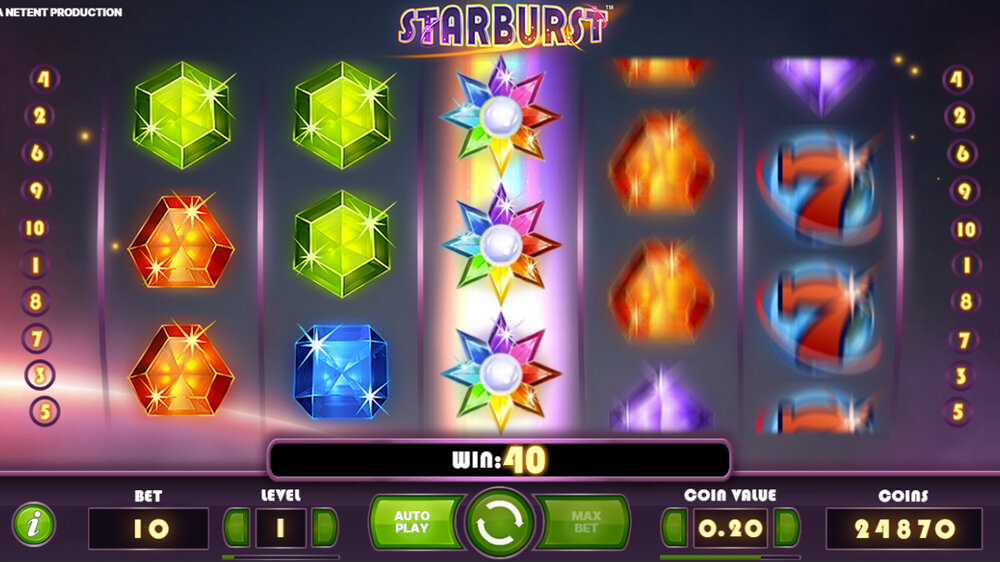 The theme of Starburst is simple; gems floating in space. It's a beautiful, glimmering game with an almost ethereal soundtrack and ambience. Naturally, the pace will pick up when Wilds and wins happen.

The paytable on Starburst is as follows:

The maximum win from Starburst is 500x your bet, which can be achieved by landing expanding Wilds on reels 2, 3, and 4, together with the highest-paying symbol BAR being stacked on reels 1 and 5.

This slot pays both ways, which means you only need at least three winning symbols on the same payline starting from reels 1 or 5.

The only special symbol in the game is the multi-coloured star, which acts as a Wild and substitutes all other symbols.

The Wilds can only land on reels 2, 3, or 4. When they do, they turn sticky, expand on the whole reel, and grant an extra spin at no additional cost. Each Wild acts like this, so it's possible you can get up to three extra spins if the Wilds appear on the reels one at a time on subsequent spins.

It's fairly easy to find casinos that offer Starburst bonus spins on deposits, but free spins without deposits upon registering are a bit trickier. Here are the UK online casinos where you can get Starburst free spins, no deposit needed:

To claim these spins, all you need to do is sign up to NetBet and follow the instructions. Note, that NetBet's free spins require a bonus code which you need to type in when completing the signup form.

At Jammy Monkey, you actually get £10 credited to your account as bonus money when you sign up. You can use this tenner to get up to 100 free spins on Starburst. If you adjust the bet, you get fewer spins but they're more valuable in return. For example, you can play the slot with 20p spins and get 50 free spins in total.

If looking at numbers and features only, it's clear that Starburst can't compete with modern slots. Apart from the paylines going both ways and the Wilds, there's not much going on with the features. Most modern slots have at least a free spin bonus game, which is usually triggered by landing Scatter symbols. In Starburst, you can get only three free extra spins in one go at best.

Also, Starburst has only 10 paylines, while the general average with modern slots is 20. The maximum win in Starburst is 500x your bet, which just can't compare to the nowadays usual max wins which start from 1,000x, the average being around 5,000x.

However, this doesn't mean Starbust wouldn't be a good slot to play. The pros include easy playability, simple UI, and not being of high volatility, Starburst is easier on pockets. It's a good game, especially for new online players looking into how casino games work.

➕ Easy to learn and play

➕ Works great on almost all devices

➖ Not very interesting for seasoned players

Starburst XXXtreme came out in 2021, and it hits the entire slot to a higher gear. Basically, it's Starburst on steroids:

However, there is one feature that has been dropped from Starburst XXXTreme, which is the win both ways. In the XXXtreme version, the paylines go only from left to right.

As the name also suggests, Starburst XXXtreme's volatility level is extremely high. The RTP of this slot is 96.26%, which beats the regular Starburst by a hair. The maximum win in Starburst XXXtreme is 200,000x your bet, which is substantially bigger.

Starburst Extreme slot has a lot going on, but is it better than regular Starburst? Yes, and no. As you play the XXXtreme version, you will surely notice the impact of higher volatility and the missing feature of both-way paylines. It's harder to hit wins at all and, if you want to activate the XXXtreme spins feature, you've got to dig deep for it.

Starburst XXXtreme is a good fit for players looking for extreme limits and for those ready to risk more of their bankroll for potential wins. For players looking for learning the ropes of online slots and a more mellow gambling experience, I'd advise sticking with the regular Starburst. In the end, both of these Starburst games are of the high quality of NetEnt, so you can at least count on that when making the choice.

Our verdict: A nice slot for beginners

Starburst is one of those slot titles one simply can't avoid when entering the world of online casinos. It's practically everywhere since its supplier NetEnt is one of the top providers across the globe. And, because it is a low-volatility game with a small minimum bet, it's a popular choice for casinos to offer free or bonus spins on.

It might be a great slot game for those new to online gambling, but I find that experienced players could lose interest in this game relatively quickly. Today, Starburst doesn't really have the ‘wow' factor to trigger any thrills or to set the pulse-raising. If you are on a smaller bankroll, Starburst would be a great option, since bets start from as little as £0.10.

There are no Starburst slot tips or tricks I could share to boost your winnings. Being careful with your bankroll and placing bets in line with your budget should prolong gameplay. After all, this is a low-volatile game so you can expect small wins regularly. With a maximum win of 500x your bet on each re-spin, Starburst has stood the test of time, to become a staple casino favourite.

The popularity behind Starburst is most probably because:

In short, Starburst is a very beginner-friendly online slot. Next to Book of Dead and Fluffy Favourites, Starburst is also a pretty standard game choice for online casinos' bonus spin offers.

After signing up and making a deposit to an online casino, playing Starburst is fairly easy:

The game has five reels, three rows and ten paylines going both ways. The reels 2, 3, and 4 have a multi-coloured Wild. If the Wild lands the reel, it will stick and expand to fill the whole reel, and grant an extra spin. You can have up to three extra spins for the cost of only one spin if the new Wilds land on subsequent spins.

The game itself does not have a free spin game per se, but you can trigger up to three re-spins with sticky Wilds. If you're looking for free spins to play Starburst with, be sure to check out our casinos offering no-deposit free spins on Starburst.

NetEnt launched Starburst in 2012. In 2021, NetEnt revamped the beloved slot and released Starburst XXXtreme, which has a significantly higher volatility level, as well as the maximum win.

It's certainly a good slot for beginners, but many seasoned players still regularly have a go at it. Starburst has also been popular for well over a decade now, which it surely wouldn't be if it weren't a good slot!

Almost any casino offering NetEnt's slots has this classic title in its library. To save you time, we've gathered a list of all Starburst casinos on Bojoko.