Gonzo's Quest is a beloved slot game from the iconic supplier, NetEnt. The slot is already well over a decade old, but still going strong and is seen as one of the cornerstones for modern-day online slots. Check out below where you can play Gonzos Quest slot and uncover the lost city of Eldorado! 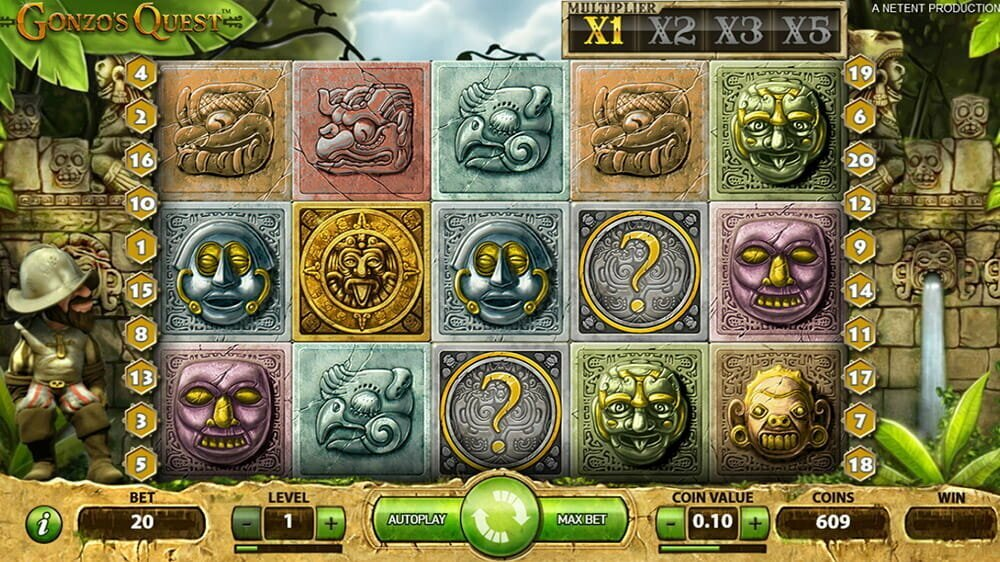 Gonzo's Quest is a classic slot game by software provider NetEnt. Spread over three rows, five reels and 20 pay lines, this Mayan-themed slot game features the unique Avalanche Reels, which can reward you with up to 5x your bet for every winning combination. Gonzo's Quest RTP is 95.97%, which is close to the average RTP of high-paying online slots (96-97%).

This slot game has a long history, stretching back to 2013, and since then, it has developed a bit of a cult following. With the legendary explorer Gonzalo Pizzaro, or Gonzo for short, as the main protagonist, this slot game solidified NetEnt's road to success overnight.

When you hit a winning combination, blocks of stone symbols explode. There is no soundtrack as such. Just the hum and din of the jungle as you would expect, should you don your Indiana Jones hat and storm the Amazon jungle.

It is a widely enjoyable visual experience, and with bonus features to boot, Gonzo's Quest was a step forward from boring fruit machines. Today, Gonzo is the one true mascot of online casinos. You see him everywhere you look, making sure that Gonzo's Quest will always be in the public consciousness. 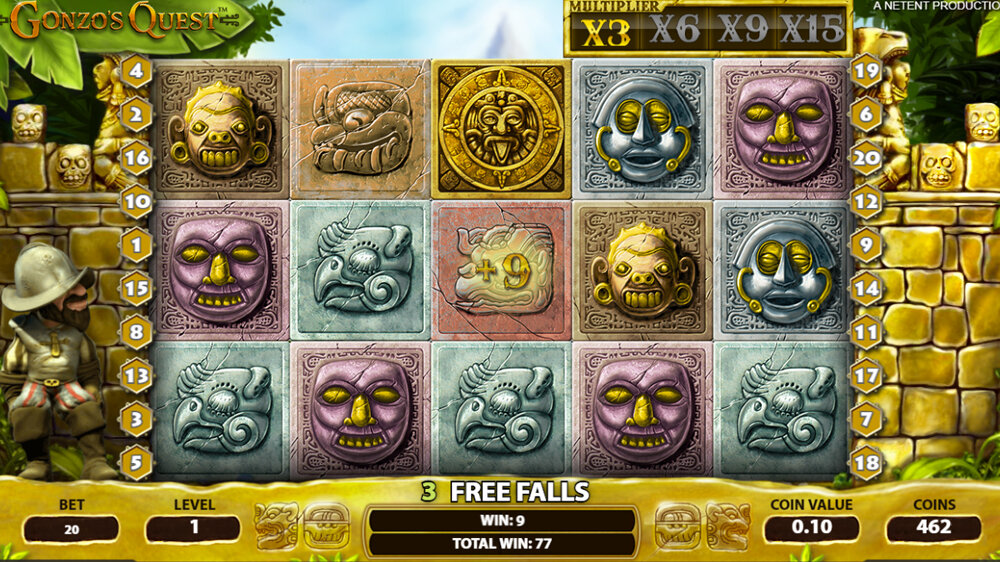 Gonzo's Quest is a Mayan-themed slot game, so symbols entail a variety of masks and animals etched onto stone slabs. Most importantly, the question mark symbol acts as a wild to replace all other symbols in a bid to create a winning combination. The golden slab is the scatter, which can trigger the Free Falls bonus round.

The most rewarding symbol is the Heath, which can reward you with 125x your stake if you hit up to 5 in combination.

You can win up to 20 free spins from the base game if the golden scatter symbols land in specific places where they hit not one, but two winning lines at the same time. You can also trigger more free spins during the Free Falls by landing another three scatters.

Gonzo's Quest was released in 2011 and since then, we've seen thousands upon thousands of different kinds of slot games coming out. NetEnt is still going strong, but many other game suppliers have gained fame during these past years.

If we compare Gonzo's Quest to other modern-day slots today, Gonzo has definitely lost some of its shine. The cascading reels, which NetEnt has trademarked as Avalanche, was the most unique feature of Gonzo and what really made it stand out from the crowd. Nowadays the feature can be spotted in several slots, such as Sweet Bonanza, Reactoonz, Esqueleto Explosivo, and Jammin' Jars.

However, since its launch, Gonzo's had some company! In 2020, Red Tiger and Netent published a sequel called Gonzo's Quest Megaways. Ultimately, it works just like the original, but with the difference of having paylines up to 117,649. In addition, there is the Earthquake feature which randomly destroys all the low-paying symbols and replaces them with better ones.

Today, there are a total of four games in the Gonzo's Quest slot family, and one live game show based on the slot: 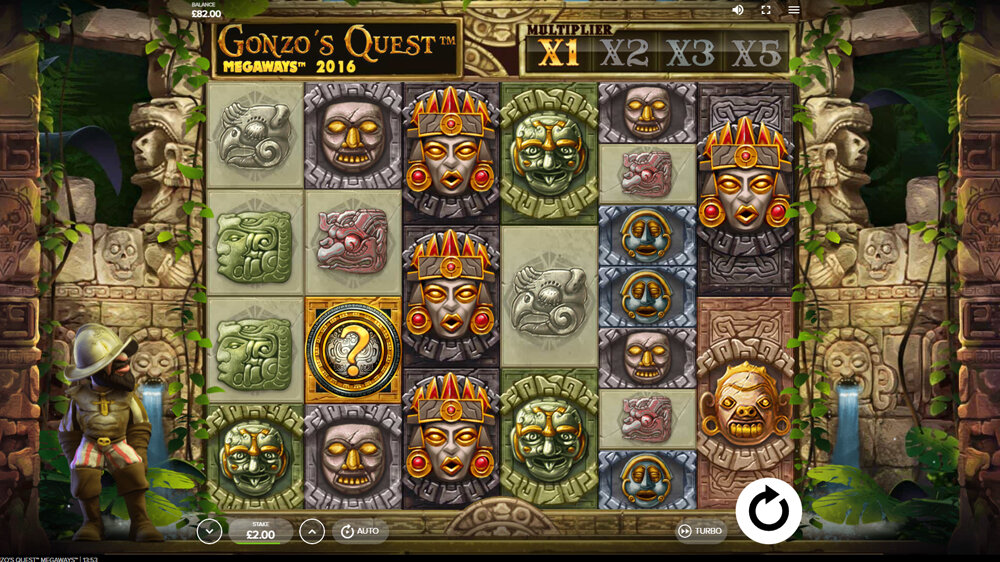 Gonzos Quest Megaways came out in 2020, and it was the centre of the hype and attention. After all, it was a big revamp for such a cult classic. While the RTP stayed pretty much the same as did the basic features, Gonzo's Quest Megaways did change the game into a higher gear. Let's take a quick look at the most important differences between the classic, and the Megaways version:

In short, Gonzo's Megaways is definitely bigger and rich with features - but is it better? It also has a higher volatility level, meaning the possible wins are scattered wider and when it hits big, it can hit Big with a capital B. But, higher volatility also means that big wins are scarce. The free spins are also harder to trigger in Megaways, and it's significantly harder to achieve more than the basic 9 spins.

For a player looking for good times, relaxed gameplay and some nice wins, the original Gonzo's Quest might be the better choice over the Megaways.

Our verdict: A bit dated but still has its charm

Gonzo's Quest has stood the test of time, with many players still flocking in droves to it. This cult classic has entertained thousands of players and continues to do so, to this day.

But, before you go all out spin-happy to play Gonzo's Quest, there should be a few words of caution. This game is of medium variance, so you can't expect to generate wins as often as you'd like to. The paytable is generous enough, but if you're not hitting winning pay lines, it will deplete your bankroll fast.

Additionally, if you are a seasoned player who loves fast-paced games…. well, maybe this isn't the game for you. What I found tedious is that when you do hit a winning combination, the game slows down a tad until symbols explode and are replaced by new ones. Some of you might like the pace of this game as it is, each to their own.

Personally, this was the game to introduce me to the gaming industry, and since then it has been a reminder of how far games have come along. After all these years, I still find myself playing it from time to time, even with all the new slots and games on offer.

Gonzo's Quest is, in many ways, one of the most iconic slot games out there. It holds a fistful of features, of which the Avalance is interesting as it removes the winning symbols, making way for new possible wins and grants multipliers. During the Free Falls bonus round, your winnings can be multiplied up to 15x.

If you're looking for a game with a high RTP and massive possible wins, then Gonzo might not be the best choice out there. However, Gonzo's Quest can be a fun past-time slot game, especially for those who are new to online slots.

You can play Gonzo's Quest practically on any online casino that offers games from NetEnt. Check out our list of casinos where you can play Gonzo and other NetEnt favourites.