Rhino.bet trampled to the casino market in early 2021. It is a part of the Playbook casino family, which is especially known for their good sports betting.

Rhino.bet is a sportsbook at heart, but doesn't shy away from casino games. They have a solid slot catalogue, Slingos, Scratchers and table game to boot.

This casino is a strong all-rounder that has a little bit of everything.

One thing that stood out for me was the site layout. This casino isn't just some carbon copy of another site, but a very unique design.

It feels like the casino was designed for mobile devices first and then ported to desktop. There are some quirky design choices, like the FAQ or T&C sliding from the right in a narrow column that just screams mobile, but doesn't work that well on desktop.

Fortunately, these are minor nitpicks, and in general, the casino's visual style is good.

Rhino.bet is a secure casino that is licensed by UKGC. They follow strict gambling regulations for safe gambling experience.

If you are into sports betting, check out Rhino.bet's sportsbook review. 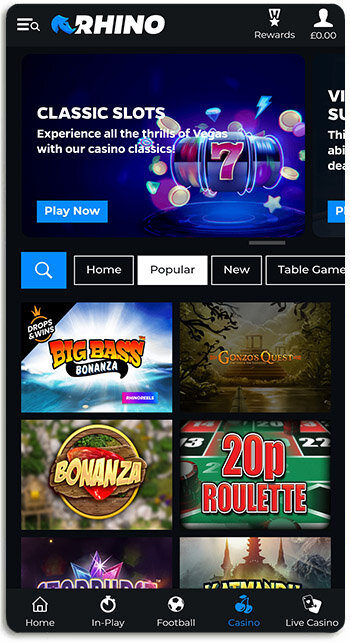 Rhino.bet has a nice deal for their casino players. You can get a good number of bonus spins when you start.

When you make your first deposit of at least £25 and wager it, you will get:

These bonus spins come in two parts, first 50 spins when you complete the required wagering of £25 and the last 25 spins are yours the next day.

This bonus offer is a nice way to start your visit to Rhino.bet. The obvious thing is that it is not a very big bonus, but the terms are great.

To get the spins, you are basically doing what you would do normally, which is deposit and play slots. This part is not even a real requirement, just a formality.

The actual wagering is also something noteworthy. The spins have a 10x wagering requirement, which is very low compared to other casinos. This is something a good number of players will be able to complete.

This bonus is worth your time and something you should definitely consider.

When you make your first deposit of at least £25 and wager it once, you are eligible for 75 bonus spins on Bonanza.

To get the bonus, you must use the bonus code "casino75".

The spins are credited in two batches, first when you meet the requirements and the second the following day.

Rhino.bet casino is built with diversity and quality in mind, rather than just taking every single slot available on the market and calling it a day.

Rhino.bet's game library has cherry picked great titles from multiple game developers. The biggest bulk of the games come from Pragmatic Play and Inspired, who do make fantastic slots. There are also some suppliers, like NetEnt, or Evolution as they are listed here, that only has two games, but they are there.

There are plenty of good games to choose from, but Rhino.bet could have splurged a bit more on the slots. Maybe having one or two major suppliers in there as well, or add some of the more well-known games. Right now, some players might look at the catalogue and not find games that they know and love.

I did enjoy testing the games out and seeing what was available. I ended up trying games that I haven't previously played just because some of my favourites were not available.

What I also found refreshing is the emphasis on other games than basic slots. There are Slingos, Scratchers, LuckyTaps and many others.

Rhino.bet doesn't have your typical jackpot games, but they do have Pragmatic Play's Drop & Wins slots, which have additional prize drops. These are nowhere near the wins from progressive slots, but are a fun little extra that adds value to the game.

From a technical standpoint, the games loaded up quickly and the casino felt smooth. Even with every single game listed up on the screen, the casino didn't lag.

Don't forget to check out Rhino.bet's sportsbook while you're there. They have a lot more than just casino games available.

Rhino.bet mobile casino is built on HTML5 technology, which means that you don't need to download any apps, but they are there if you want to.

You can play simply using your web browser, but both Android and Apple have an app for sports betting.

The mobile user interface is a bit divisive. On the casino side, all things are clear and well-sorted. This on the other hand is not true for the sportsbook side, where things get crowded. This is where the app comes in and makes things a bit easier for bettors. But, if you are a casino player who just wants to play slots and table games, then you are good.

The mobile casino layout is very similar to the desktop one, and it feels like it was designed with mobile casino first, and then ported to desktop.

Browsing games is just as easy, as all the same filters and categories are available. This makes things a lot nicer than just scrolling through an endless list of games.

Simply put, the mobile experience is solid. Bettors might want to go for the app, but slots fans and casino players can enjoy a perfectly good mobile browser casino.

Rhino.bet has brought in two big names to provide you with a good variety of live casino games. By their games combined, Pragmatic Play and Ezugi create a great live experience.

What is apparent instantly, is that there are a lot of unique titles here. There is plenty to choose from and players can easily find their favourites. There aren't that many games in total, but that is just because there isn't a ton of different tables for just one game, like having two dozen roulettes.

What I did like about Rhino's live lobby is the categorisation. Finding games is made very easy with all the filters and search fields. Not that browsing through every game was difficult here to begin with, but good filters make life just that much easier.

The games themself run smoothly and the experience is is spot on. You won't get all the most popular game shows or unique titles from bigger developers, but what you get is a solid casino with all the basics covered.

Rhino.bet is licensed and regulated by the United Kingdom Gambling Commission. This is a good sign of reliability and trustworthiness for British gamblers.

Setting yourself limits is a good practice that should be done by everyone, no matter if you have problems gambling or not.

Customer support on Rhino.bet is there to help you. You can start off by checking out the FAQ on site, and if that isn't enough, then contact the support team via email.

Rhino.bet has a notable precense on social media platforms as well. You can get quick assistance by using private messages on Facebook or Twitter. This is actually the best way to get help if you have simple questions or easy things. We don't suggest you use any social media services to send verification documents.

Personally, I don't think this is a good approach to customer service. It is possible that Rhino.bet's customers are heavily into Facebook or Twitter, and to them this works. But I know there are plenty of players like me, who couldn't give a toss about social media. To us, there is only a slow service available. I would give more praise for this if the casino also had live chat on their site, but that is not the case.

Due to UKGC regulations, Rhino.bet needs to verify all of their customers. This is so that only players of legal age can gamble and the funds used are not obtained through criminal means.

Rhino.bet uses a very strong automatic verification service that will check your information after you create an account. If you can't be automatically verified, you account will be suspended until you do it manually.

The casino will let you know what documents are needed and where to send them. These documents may include:

If you need to verify your account, you need to send the required documents to the customer service via email. When the verification is complete, you can log in to your account and start playing.

This kind of strict verification is basically what UKGC requires from casinos. From a player's point of view, it can be annoying if it doesn't work straight away, but there is a good reason why it is done.

We do suggest that you keep a fresh set of files saved on your computer, which you can then quickly send and get the verification over and done.

Rhino.bet takes a very simplistic approach to deposits and withdrawals. There aren't really any options there, just debit cards.

Making a deposit is a simple thing. Just head to your account, choose deposit and follow the instructions. If this is your first deposit, you create a new payment method, and later on you can just use it to top up your account.

The minimum deposit and withdrawal are both £10, which is a fair sum.

Due to the simple nature of the available methods, withdrawals are also a breeze. Just pick a debit card you have already added and used to deposit, and put in how much you want to withdraw. The only issue basically is the speed, as debit card withdrawals generally take multiple days to actually show up. Rhino.bet processes the withdrawals fairly quickly, but you still have to wait up to 5 business days for the money to land.

In a way, I like that the transfers are simple and that there is basically no room for errors. That being said, I just wished they would have used a faster method instead of debit cards.