Added to Bojoko by FantasmaGames

Fantasma Games is one of the newer game developers set to take the online gambling market by storm.

Founded in 2017 in Stockholm, Sweden, Fantasma Games was formed with the aim of making gambling more like gaming, thanks to immersive mobile slots.

Our goal has always been to become a global leader in the iGaming industry. Although our games portfolio is still on the smaller side, it is widely available at more than 200 online casinos in the market.

We have captured players’ interest with games such as Medallions and Flower Fortunes, which are some of the most innovative games under our belt.

We also frequently collaborate with some of the leading software providers in the industry, including Yggdrasil, Microgaming and Relax Gaming.

These game providers often borrow some of our features and inject them into their own online slots.

Being at the forefront of innovation and being one of the first companies to embrace BR technology has made it possible to capture people’s attention.

Keep on reading to learn more about Fantasma Games.

We currently have more than 10 casino games to our name. All of them come with vibrant in-game features designed for maximum entertainment.

Take online slots Medallion Megaways or Flower Fortunes Megaways, for example. These games were both released in 2019 and are the result of a strong partnership with game developer Big Time Gaming.

These games both feature a random reel modifier mechanism, which means that the amount of paylines will be random on each spin. In Flower Fortunes, you can trigger up to 531,441 paylines per spin.

Our first every slot game Super Sumo pounced us into the online gambling market. The game is built over 5 reels with 25 paylines. Though it might be less adventurous than later slot games, Super Sumo still boasts unique in-game features.

In this game, a sumo wrestler acts as a wild to substitute for other symbols in a bid to create a winning combo. However, land two or more of him and you’ll re-trigger a respin.

Games are fully responsive on mobile and fill out the entire screen. Buttons are more prominent making it easier for you to spin the reels without missing out on a quality gambling experience.

There are currently no live dealer games in the software developer's game repertoire.

There are currently no jackpot games in the software developer's game library.

All games are available to players who are 18 years and over. Additionally, all games are regularly tested and audited by independent third parties.

Games use a random number generator to produce fair and impartial results.

Fantasma Games are available in numerous languages, including English, Norwegian and Swedish. 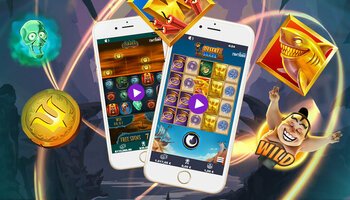